The Bedouin community is bitter over the offer outlined by Prime Minister Benjamin Netanyahu to assuage the Druze community's concerns about the controversial new Nationality Law. 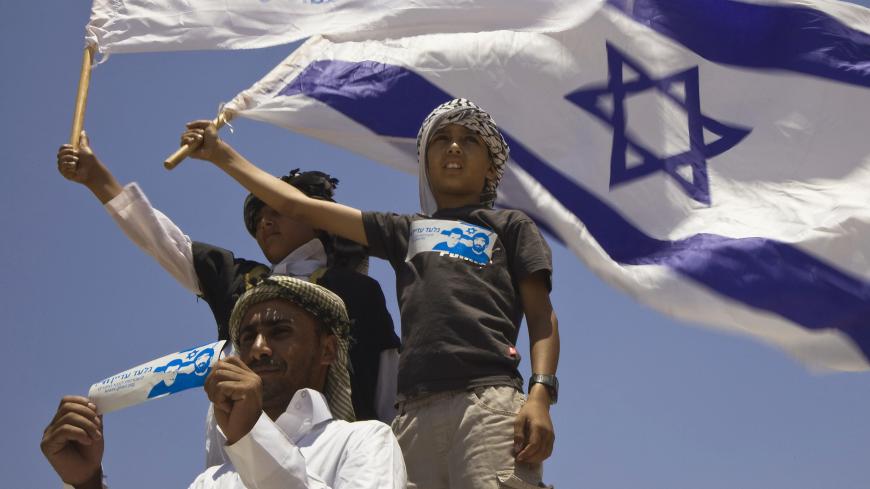 The Israeli Druze community strongly objects to the new Nationality Law, codifying the Jewish character of the State of Israel. Prime Minister Benjamin Netanyahu has refused to amend the law, proposing instead a series of benefits for the Druze through legislation. Netanyahu in recent days held several meetings with Druze leaders to try to resolve the crisis.

Former Knesset member Shakib Shanan, who sits on the committee established by Netanyahu to deal with the issue, was visibly excited when he left the Prime Minister’s Office Aug. 1. Shanan reported that the Druze parliamentarians in the coalition had accepted, in principle, the compromise outline presented by Netanyahu. Talking to Al-Monitor afterward, Shanan said, “We have reached a historic achievement that regularizes the special status of the Druze community.”

According to Shanan, the outline includes the legal anchoring of the status of the Druze and Circassian communities, acknowledging their contributions in strengthening Israel’s security and shaping Israel as an egalitarian society. The outline will also reportedly include support for the Druze community’s institutions in the spheres of religion, education and culture. Similarly, it offers strengthening Druze areas, including residential construction, establishment of new localities when needed and preservation of the Druze legacy and heritage.

The outline also includes enacting laws that protect the rights to benefits of all minority religious groups and communities who serve in Israel’s armed forces, thus preserving social equality for them, and anchors recognition of their contribution in defending the state.

Al-Monitor asked Shanan whether the material benefits that Netanyahu is offering the Druze will turn them into first-class citizens with equal rights and status. Shanan responded, “The Nationality Law says that the State of Israel is the state of the Jewish people, and we do not disagree with that. The special legal status that the prime minister offers the Druze is a status comparable to the Jews.”

Most of the community’s leaders who discussed the proposed outline with Netanyahu expressed satisfaction with it and in a statement called this a historic window of opportunity for the advancement of Israeli society. Not everyone, however, is satisfied. It seems that Netanyahu succeeded in sowing dissent even in Israel’s Druze community.

Brig. Gen. (res.) Amal Asad, founder of For Our Druze Sons, a project commemorating Druze soldiers who fell in Israel’s wars, sharply criticized the outline on Facebook. He called it “even more humiliating than the Nationality Law.” Asad wrote, “The Prime Minister’s creative head invented a new spin: Remain quiet, know your place, and then perhaps you’ll receive some benefits. … This is the exact definition of a mercenary army. And the Netanyahu that we all know won’t be in a rush to pay up; in the end, we’ll get nothing.”

Asad continued, “Now there will be a Basic Law stating that the Jews are lords of the earth (even if they are yeshiva students who don’t serve in the army). But there will also be another law (a regular one, not a Basic Law) telling all the non-Jews, If you serve in the army, you will receive ‘benefits’ … so the Druze community will send its sons to the front lines in exchange for ‘benefits.’ Netanyahu believes that we’ll send our children to the army not to protect our country (because according to him, this isn’t our country), but in order to receive permission to collect scraps from under his table. Netanyahu thinks that we’ve gotten used to a slave mentality.”

Another member of the community, Rami Halabi, claimed that Netanyahu’s “offer” borders on bribery, with Israeli citizens agreeing to forfeit basic human rights.

While members of the Druze community are arguing over whether Netanyahu’s offer is a historic achievement or a bribe, the members of the Bedouin community feel especially insulted, as many of their sons also serve in the army. They complain that Netanyahu’s outline is directed only at the Druze and Circassian communities, and the appendage of the “rest of the communities” was only added as a fig leaf. The Bedouin community was not listed expressly, as the others were.

Lt. Col. (res.) Amir Mezarib is the nephew of the highly decorated IDF Bedouin officer Amos Yarkoni, who established the famous tracker unit in the IDF’s elite reconnaissance units in the mid-1950s. Mezarib told Al-Monitor that Netanyahu has betrayed the contribution of the Bedouins who died while ensuring the security of the State of Israel.

“The Nationality Law and everything that ensued after the law’s passing are destroying the fabric of the delicate relationship between us and the Jews,” Mezarib remarked. He said that every year, Yarkoni’s former military subordinates, including IDF generals, heads of Shin Bet and Mossad, convene at his grave. They all proudly talk about the brotherhood between Jews and Bedouins in the army since the establishment of Israel and the experiences they shared.

“Entire generations of security men grew up on Yarkoni’s legacy and valor, and now everything has been tainted, has fallen apart,” Mezarib said. “With a wave of his hand, Netanyahu, who wants to rule, passed a law for political gain, to strengthen his position and that of the law’s advocates, who want to take pride in their support of the law when the primaries come around. That’s how they threw an entire community over the ledge and turned them into second-class citizens.”

Mezarib continued, “None of the Bedouin leaders will tell Bedouin youths to refuse to serve in the IDF in protest, but there’s no doubt that the law, and now the discrimination against the Bedouin in contrast to the Druze and Circassians, will lower the motivation of youths to enlist. The Bedouin contributed to Israel’s security even before the establishment of the state. They helped the Jews when the latter were weak and needed assistance. The Jews received support and help from our fathers and grandfathers. Now the child has grown up and strengthened and spurns us.”

As noted, Netanyahu has no intention of amending the Nationality Law, and as far as is known, he has not considered another vote to nullify the law in light of the protests by the minority groups. Instead, Netanyahu searches for “creative” solutions to provide “benefits,” which will soon be forgotten, but the civil inequality will remain forever. To offset the damage done to non-Jews by the law, Netanyahu creates a mandatory “acceptance threshold” for them in order that they be considered “citizens with rights,” though not necessarily with the same rights as first-class Jewish citizens.

The Nationality Law has created a dangerous precedent according to which the principle of egalitarian citizenship is replaced with preferences for Jews, even those who avoid the military draft. On the other hand, any non-Jew who wants to have equal rights in Israel will be required to present, at the least, a demobilization certificate from IDF service. This proves one's loyalty to the state, but is still not necessarily enough to confer full equality. For the Bedouin community, which lost hundreds of its sons in Israel’s army since the state's founding, IDF service and self-sacrifice are not enough to be a citizen with equal rights.

“I served in the IDF and the security system for 25 years,” said Mezarib. “I was even privileged to recently receive a commendation from Benjamin Netanyahu himself. I did things in the course of my long service that I cannot even talk about, yet the passage of this shameful law has rendered me a second-class citizen, not only compared with the Jews, but also in comparison to the Circassians and the Druze.”