A group of Israeli legal experts have drafted an amendment to the Nationality Law to codify equality for all citizens. 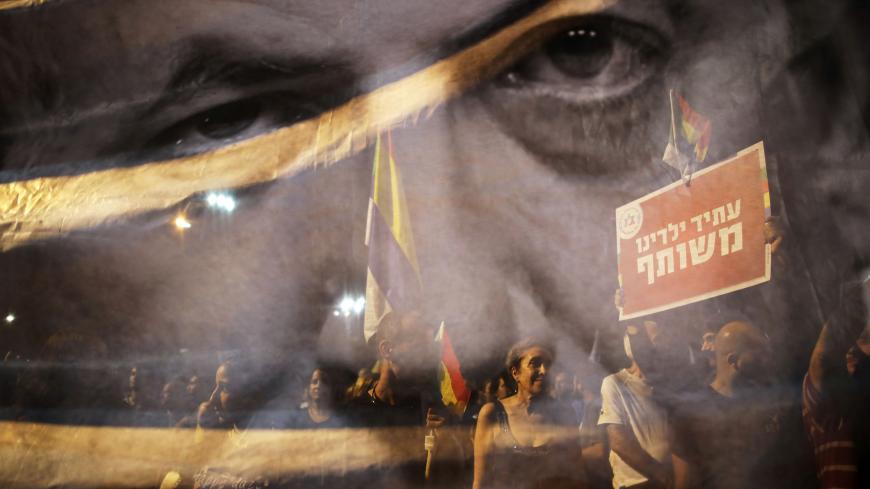 Members of the Israeli Druze minority, together with others, take part in a rally on Rabin Square to protest Israel's Nationality Law, Tel Aviv, Aug. 4, 2018. - REUTERS/Corinna Kern

After being granted an extension by President Reuven Rivlin, Prime Minister Benjamin Netanyahu as of May 18 only has 10 days to form his fifth government. All the parties that were supposed to be part of the next coalition understand Netanyahu's political situation as well as his sensitive legal position — he faces indictment for corruption pending a hearing — and are making unrealistic demands that are making it difficult for him to accomplish his task.

The demands in question range from a commitment to take down Hamas in Gaza to the annexation of West Bank lands to the cancellation of the 2005 disengagement and the enlistment law (concerning the drafting of ultra-Orthodox youths), a source of contention between Yisrael Beitenu head Avigdor Liberman and the ultra-Orthodox. This is in addition to Netanyahu’s desire to pass an immunity law (requiring the attorney general to get Knesset approval to withdraw a member's immunity) and the override clause (allowing the Knesset to override High Court decisions), which would save him from legal prosecution. All this is on the table, and every squabble over a comma could leave Netanyahu stranded without a government.

Only one topic is not on the agenda of the right-wing parties: amending the Nationality Law, which anchors the Jewish nature of the State of Israel. The law caused an uproar in Israel and elsewhere and has since been left a festering, open wound. After the Knesset passed it in July 2018, Netanyahu said, “The feelings of our Druze brothers and sisters touch my heart. The people of Israel, and I among them, love and appreciate you. We deeply appreciate our partnership and the covenant between us.” This was as far as the prime minister’s empathy went.

According to the Central Bureau of Statistics, at the end of 2018 the Druze population in Israel numbered about 143,000. Among them, 75,000 have the right to vote, representing less than two Knesset mandates. This is not the type of electoral power to strike fear in Netanyahu, despite his alleged heartfelt sentiments toward the Druze, who serve in all the security services, including the Israel Defense Forces (IDF), many of them in combat roles.

The Druze do not have a political lobby to help them present an ultimatum to the prime minister to change the Nationality Law. An effort by Brig. Gen. (res.) Amal Asad, one of the leaders of the Druze protest against the law, failed to pressure various political parties to include an amendment to the Nationality Law on their platforms on the eve of the April 9 election. The only promise he received was from Blue and White Chairman Benny Gantz, but it is doubtful that from his likely place in the opposition that Gantz can effect the commitment. Asad did not, however, despair.

Asad recently succeeded in recruiting four prominent Israeli legal scholars and a philosophy professor to formulate an amendment to the law, which they made public May 15. The scholars are Justice Elyakim Rubinstein, former deputy president of the High Court who also served as legal adviser to the government from 1997 to 2003 under Prime Ministers Netanyahu, Ehud Barak and Ariel Sharon; Professor Shachar Lipshitz of the Bar-Ilan University Faculty of Law; Professor Suzy Navot from the Haim Striks School of Law at the College of Management Academic Studies; Professor Amichai Cohen, former dean of the Ono Academic Campus Faculty of Law; and Professor Asa Kasher, winner of the Israel Prize in philosophy and the author of the IDF’s code of ethics.

“We believe with complete faith that the State of Israel is the nation-state of the Jewish people,” they wrote in the introduction to the suggested amendment, “however, we believe that this Basic Law, which reinforces the Jewish character of the state, must also express its democratic character, and thus it must be amended … [I]t is right to give the more than 20% of the public who is not Jewish a sense of partnership. In our view these things fit with the requirement of fairness and with common sense.”

Rubenstein told the media, “It’s essential that all non-Jewish citizens, and certainly those who serve in the security forces, feel that the state is their home. This is not merely a matter of legal casuistry, it’s also the demand of decency.” Formulated in the spirit of Israel's Declaration of Independence (1948), the amendment recognizes Israel as the national home of the Jewish people but notes that the state also upholds the equal right of every one of its citizens.

The clause of the Nationality Law that grants preference to Jewish settlement was amended to read, “The state sees in the development of Jewish settlement a national value and will work to encourage and advance its establishment and support, all in the spirit of this Basic Law and to the benefit of all its residents.” The amendment designates the Arabic language, afforded only “special status in the state” by the Nationality Law, as the state's “second official language.”

Likud Knesset member Amir Ohana, chair of the Knesset committee that formulated the Nationality Law and one of Netanyahu’s closest associates and defenders, rejected the suggested amendment point blank. In a Ynet interview he called it a “broken record” and asserted, “To say 'equality’ in the Nationality Law is to say that all the nationalities are equal, not that Israel is the nation-state of the Jewish people. Equality is great, and we respect it, but this is not connected to nationality.” This angered Asad.

“It’s upsetting,” Asad told Al-Monitor. “Give some respect to the people who wrote and worked hard [on the amendment]. These are legal scholars who cannot be accused of being left leaning. They are people who love Israel perhaps even more than he does.”

Asad further stated, “A whole sector [the Druze] received a major blow and has been feeling terrible. Are they [the government] waiting for there to be an outburst and a rift that can’t be healed?”

Asad said that he has tried every official, quiet and nonviolent means “to bring about a change to the discriminatory law, to speak to people’s hearts, even to the most extreme right.” He explained, “We aren't asking for national equality, but for civic equality. No nationality intends to threaten Israel. We love Israel with a Jewish majority, a Jewish democratic state.” Asad said that he has sent the document to Netanyahu, but has not received a response.

After the law passed the Knesset, Netanyahu met with Druze leaders in August 2018 and offered them a package of benefits in an effort to assuage their anger, but a verbal altercation between Asad and Netanyahu ultimately led to the meeting imploding. “I will not speak to anyone who calls me the prime minister of an apartheid government,” Netanyahu said, citing an online post that Asad had written about passage of the Nationality Law.

“We have no differences with regard to love of the country,” Asad told Al-Monitor. “I asked to meet with him, and I would be glad if the meeting took place.”

Asad, when asked why he thinks Netanyahu would consider amending the law if he is not even willing to speak to him, replied, “He understands that a mistake was made. Something was done in haste, and perhaps there’s room to fix it.”

Perhaps Asad is mistaken. At a time when Netanyahu and his colleagues are conducting an all-out war against the judicial system, it is unclear that the suggestion of top legal scholars could convince him to agree to change the existing law to grant equal civil rights in Israel.