Prime Minister Benjamin Netanyahu did not foresee the degree of anger the Nationality Law would generate among the Druze, with protests spreading quickly, including to the military. 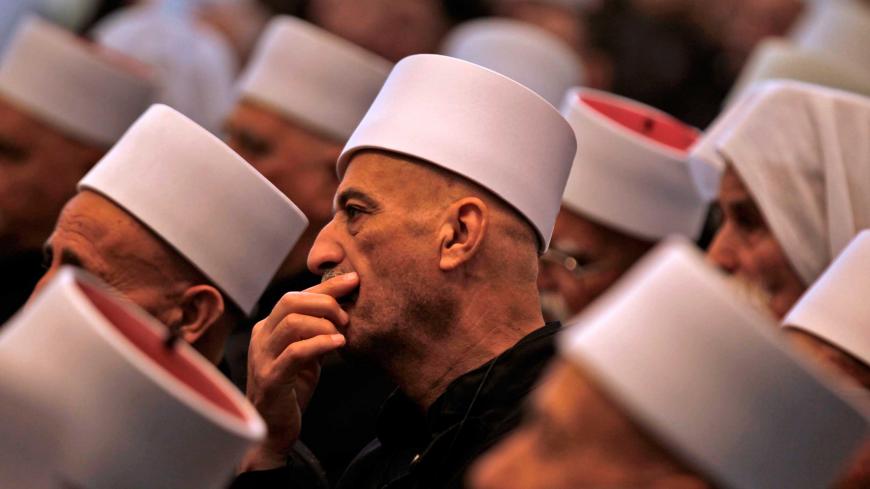 Members of the Israeli Druze community attend a celebration at the tomb of Nabi Shoaib, near Tiberias, northern Israel, April 25, 2018. - JALAA MAREY/AFP/Getty Images

On July 19, the Knesset adopted the controversial Nationality Law, codifying the Jewish character of the State of Israel. Since then, Israeli Druze, Arabs and Jewish members of the opposition have been protesting it. Two weeks on, the protests continue, with those by the Druze expanding, including to the Holy of Holies of Israeli society — the Israel Defense Forces (IDF).

As of Aug. 1, three Druze officers had resigned their commissions and announced that they would be leaving the IDF to protest the law's passage. Another officer, Capt. Amir Jamal, posted a scathing response to the law on Facebook, earning him an IDF suspension. The IDF is still deciding how to deal with another Druze officer who responded similarly to the law. The military prohibits members from expressing themselves on political issues, which is why it is having a hard time dealing with reactions to the law.

This sensitive and volatile situation forced IDF Chief of Staff Gadi Eizenkot to rush to a meeting July 31 with the spiritual leader of Israel's Druze community, Sheikh Mowafaq Tarif. Eizenkot also released a statement calling on everyone to keep the political debate out of the army. Sheikh Tarif joined Eizenkot in his statement and called on young Druze not to refuse to serve, not to leave the army, and not to harm what is called the “covenant of blood” between the Druze and the Jews, an alliance that began even before Israel's founding.

As a major demonstration on Aug. 4 approaches, it seems as if their calls have failed to lower the temperature. What before the law's passage was considered a possible, but fleeting, tactical problem is turning out to be a major strategic issue. Prime Minister Benjamin Netanyahu has already met twice with the leader of the Druze community and even created a special team to address their concerns and demands. He has, nevertheless, shown no signs of regret.

Confronting Israel’s 140,000 Druze citizens is a stack of polls being conducted by the prime minister on an almost daily basis. They show that the cynical passing of the Nationality Law is giving Netanyahu electoral momentum. Israelis are unaware of the intricacies of the law or of the sense of affront and outrage felt by Israel’s Druze, Bedouins and liberals.

In response to the simple question “Are you for or against a law that establishes Israel as the nation-state of the Jewish people?” the overwhelming majority support the law. This was Netanyahu’s motivation from the beginning. If somewhere along the way, the delicate relationship between Israel and its Druze, Bedouin or Arab populations begins to unravel, so be it. What matters most is winning the next election.

The problem that Netanyahu failed to foresee is the determination of the Druze community and the consensus of Israeli society, even on the right, that the Druze have made enormous contributions to Israel’s security. As Danny Zaken wrote July 29 in Al-Monitor, no other community has sacrificed and continues to sacrifice the lives of more of its young than the Druze, who enlist en masse and volunteer in droves for combat units. The Druze are also firm believers in the idea of Israel as a Jewish state. They forged an alliance with the Jewish population during the British Mandate and then tied their fate to it because they shared a common narrative: Both Jews and Druze were minorities no matter where they lived. Sometimes they were even persecuted minorities.

Seventy years ago, when the Jews established a state of their own, the Druze remained a minority. It is now becoming clear that the Jews have forgotten what it feels like to be a small group living among another people and all the concerns and fears that come with it. The Druze have not, however, forgotten.

The Druze struggle is being run by the elders and other leaders of the community, but standing at the forefront are senior IDF officers, and there is no shortage of them among the Druze community. These include major generals, brigadier generals, colonels, the war wounded and the parents and siblings of fallen soldiers. They are all stepping before the cameras to express their personal, anguished response to the law. One particular point stands out: The term conspicuously absent from the Nationality Law is “equality.”

“It’s a slippery slope,” Brig. Gen. (res.) Hason Hason, one of the most decorated and celebrated heroes of the Druze community, told Al-Monitor. Hason spent 37 years in the IDF, serving in some of the most dangerous positions. He participated in the riskiest and most secretive missions imaginable, rising through the ranks to become one of the most senior officers in Military Intelligence. He ended his career as a military aide to presidents Shimon Peres and Reuven Rivlin. Now Hason is trying to calm the current outburst of emotion, calling on young members of his community not to leave the army, not to refuse orders and “not to burn down the clubhouse.”

“The Druze are the biggest miracle to happen to the Jews, and the Jews are the biggest miracle to happen to the Druze,” Hason said. “We must protest, and we must replace this law with a much simpler one: the Basic Law of the Declaration of Independence [i.e., turning it into a constitutional law]. The Declaration of Independence has everything. It even defines Israel as a Jewish state. But it also includes the value of equality, which we consider sacred and should be considered sacred by anyone who cherishes Israeli democracy and the delicate balance between Israel’s diverse communities.”

With the issue of the law still atop the media’s agenda, Druze are not the only people expected at the upcoming demonstration. Supporting the Druze are almost all the former IDF chiefs of staff — and if he could, the current chief of staff would likely speak out against the law too and support the Druze protests — almost every major general, brigadier general and other senior officer, the directors of Mossad and Shin Bet, and other key members of the defense establishment across generations. Even former police commissioners and chiefs of police have joined the struggle. Authors, artists and other cultural figures have signed a petition, while Rivlin himself announced that if he signs the law — the president’s signature is necessary to ratify the law — he will do so in Arabic to protest the law’s downgrading of Arabic from an official language.

The forcefulness of the demonstration will determine the fate of this social and political struggle. Netanyahu is still enormously popular, and the polls show that when it comes to the Nationality Law, the people are still with him. The chances that the demonstration and the growing protest will change the current situation are slim, but they exist.

Meanwhile, Netanyahu is riding this wave, hoping that it will take him to the election next year. In the 2015 election, he had his infamous video clip of himself warning, “Arab voters are coming in droves to the ballot boxes.” Now he has the Nationality Law declaring that Israel is the nation-state of the Jewish people. Since this was settled over 70 years ago, it takes a political genius like Netanyahu to reinvent it now.