The botched Israeli undercover operation in the Gaza Strip could be disastrous for Israel’s methods of operation behind enemy lines. 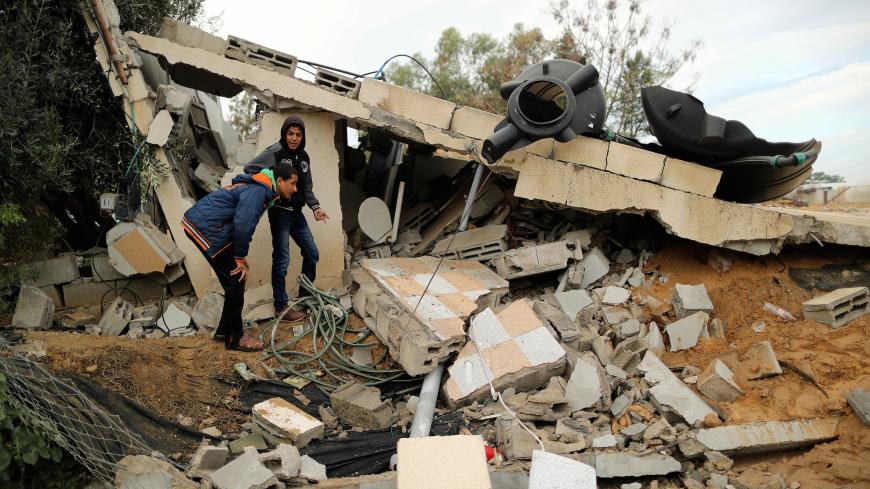 Palestinians inspect the site of an Israeli air strike on a building, in Khan Younis in the southern Gaza Strip Nov. 12, 2018. - REUTERS/Suhaib Salem

The Nov. 11 clash between Hamas and an Israeli Special Forces unit operating within the Gaza Strip is not really over. The firefight that almost resulted in war has been replaced by a digitalized campaign and battle of wits that peaked Nov. 22 in an absurd incident. Hamas invested tremendous efforts in collecting information and publishing photos of those it claimed had taken part in the botched undercover operation in southern Gaza.

In an unprecedented move, Israel’s military censor urged Israeli media outlets and the public not to share the photos Hamas posted online, not to react to them online and not to disseminate them so as not to help the Hamas crowdsourcing effort that could be harmful to Israel’s national security. As of now, the Israeli public is displaying surprising self-control and the social media buzz that Hamas Gaza chief Yahya Sinwar and his people had hoped to create has fallen flat.

Hamas and Israel are engaged in a protracted war. The organization does not recognize Israel, its charter calls for Israel’s annihilation; Israel also does not recognize Hamas and tries to avoid any direct contacts with its people. That state of play, however, belongs in the past. Nowadays, in this new era, the military wing of Hamas, Izz ad-Din al-Qassam Brigades, has Hebrew-language Telegram and Twitter accounts, and even a “tattle” hotline of the type provided by authorities to catch tax evaders, which Israelis can call anonymously to report information. Hamas fires rockets at the Israeli power station that supplies Gaza with electricity and funds a multipronged, complex terror network with millions of dollars in cash delivered to the Gaza Strip in armored trucks under Israeli supervision. What a crazy world.

Now Hamas is trying to do to Israel what Dhahi Khalfan Tamim, head of General Security for the Emirate of Dubai, did in 2010 when he exposed an undercover Israeli team sent to kill senior Hamas official Mahmoud al-Mabhouh. Israel is still traumatized by the affair, in which Khalfan’s agency used digital surveillance and Israeli-developed security cameras to expose the 11-member team it claimed was working for the Mossad. For days, Khalfan embarrassed Israel — which has never admitted to the operation — by publishing more and more photos of the operatives of Kidon, the Mossad’s mythological assassinations department, and portrayed Israel in a ridiculous light.

The clandestine Israeli operation in the Gaza Strip revealed almost two weeks ago is still shrouded in secrecy. Hamas claims it has managed to reconstruct the activity of the Israeli commandos, to find the house they rented near the town of Khan Yunis and the two vehicles they used. At the end of the firefight between the Israeli force and Hamas, Israel’s air force bombed these vehicles and destroyed them, albeit not totally. It now turns out that a gun with a silencer was left intact at the scene, which Sinwar held up proudly last week, as well as quite a few items that enabled Hamas to figure out what the Israeli force had been doing undercover for quite some time deep inside Gaza.

The rare step taken by the military censor stemmed from a simple calculation: Israel believes that for now, Hamas is feeling its way in the dark. It may have photos of people it thinks took part in the operation but it has no other information. Spreading the photos all over social media would play into the hands of Hamas and provide it with information. Israel is a small country, and people might start identifying the faces in the photos, sharing their life stories with the public, thereby damaging national security.

The identity of members of Israel’s undercover units is rarely revealed, even if they are killed in battle. Such, for example, is the case with Lt. Col. M. who was killed in the Gaza firefight Nov. 12 after saving his friends. The military chief of staff will probably award him a medal of valor posthumously, but other than his family and close friends, Israelis will never know who he was and will be unable to mourn him, lest publication of his name or photo reveal to the enemy other undercover operations in which he took part.

Military officials are praising the self-control displayed by the Israeli public, which for the most part ignored the photos posted by Hamas online under the headline “Wanted.” Nonetheless, security and intelligence officials understand that while Israel defeated Hamas in this round — killing seven of its people, and the Israeli fighters were extricated from the scene in a heroic air force operation without leaving behind a body or a kidnapped soldier — Hamas has the upper hand in terms of public awareness of the botched operation.

The exposure of the operation could be disastrous for Israel’s methods of operation behind enemy lines. The extent to which Hamas succeeded in reconstructing the team’s activity and its goals could force Israel to undertake a strategic shift in the way it conducts clandestine intelligence operations, and perhaps even threaten the supremacy it enjoys in this field over its enemies.

Nonetheless, no one in Israel is having second thoughts about the secret operation. “This is a dangerous business,” a senior intelligence source told Al-Monitor on condition of anonymity. “We carry out hundreds of clandestine operations every year, on all fronts and in places no one would even imagine. The rate of exposure and failure is virtually nil. The public only hears about the failures. The successes will forever remain veiled, which is a good thing,” the source said.

Israelis are hearing about the Gaza failure and surprisingly managing to distance themselves from the uproar on social media and from Hamas' efforts to draw them into the fray. A sticker spreading like wildfire on social media says it all: “They protected us, now we have to protect them,” urging restraint on the part of Israelis, who are generally quick to blab information. For now, it’s working.