How Saudi Arabia, Qatar are competing over Iraq

As the rivalry between Saudi Arabia and Qatar continues, each country seeks influence in Iraq in order to expand its economic and political power in the region. 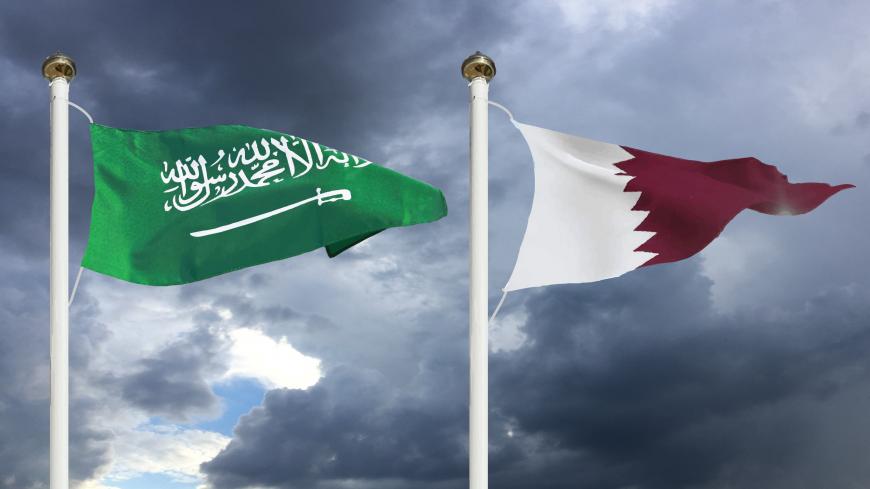 As the Gulf crisis continues with the rivalry between Saudi Arabia and Qatar, with no sign of a resolution, each country deems it necessary to seek a rapprochement with Iraq and win the country over to its own economic and political camps.

Each is trying to have Baghdad align with its axis, while Baghdad affirms its need for help from both countries to get rid of the destruction left by the Islamic State (IS) in the Sunni areas.

A Qatari delegation led by Deputy Prime Minister Mohammed bin Abdulrahman Al Thani visited the Iraqi capital of Baghdad on Nov. 7, where he met with the Iraqi president, prime minister and parliament speaker to “discuss the ties between the two countries.”

Three days after the Qatari delegation's visit, Minister of Energy, Industry and Mineral Resources of Saudi Arabia Khalid Al-Falih visited Baghdad and met with as many figures as did the Qatari Minister of Foreign Affairs. This happened in light of the tense relationship that has governed Saudi-Qatari ties since June 2017.

While in Baghdad, Falih met with Iran-backed leaders of the Popular Mobilization Units that Saudi Arabia categorizes as “lawless militias,” and he invited them to visit Doha. These meetings confirm that Doha is trying to compete with Riyadh and even sabotage its ties with Iraq by building a relationship with Saudi enemies in Iraq.

Given the polarization between Saudi Arabia and Qatar in the region, each of them is trying to attain a rapprochement with Iraq. Meanwhile, as Iraq is trying to cut off energy imports from Iran due to US pressure after the reimposition of sanctions against Iran, both Riyadh and Doha could replace Tehran in this issue. This is also a chance to win over Baghdad’s new government.

Moreover, some Iraqi Sunni blocks that are funded and backed by Qatar and Saudi Arabia are competing for the minister of defense position in new Iraqi Prime Minister Adel Abdul Mahdi’s government. It is therefore likely that the two countries of the Gulf are also competing at this level.

While Qatar supports former parliament speaker Salim al-Jabouri to head the Ministry of Defense in Abdul Mahdi’s government, Saudi Arabia supports the candidate of Al-Wataniya Alliance, led by Ayad Allawi, or any side that is not linked to Qatar or Turkey.

Research Fellow at Chatham House in London Renad Mansour told Al-Monitor, “[Saudi Arabia] has faced many challenges in creating allies in Iraq. For this reason, it is searching for Shiite leaders who are critical of Iran, while Qatar has strong ties with both Shiite and Sunnis including leaders of the Popular Mobilization [Units], with the national Sunni front and with figures close to Iran.”

Mansour added, “Iraq must balance ties with both countries, as it cannot take sides in the Saudi-Qatari crisis — especially since there is no common foreign policy. So two different actors will work more closely with either side.”

The simultaneous visit of Qatari and Saudi delegations to Iraq could point out both the unlikelihood of the normalization of the Qatari-Saudi relationship in the short term and the importance of Iraq as a neutral actor in the region and a market open to energy and gas.

The Qatari-Saudi race did not stop at the diplomatic level. Media outlets in both countries started implying the “failure” of the other to influence and align with Iraq. The Saudi-funded Al-Arabiya channel talked about “Iraq refusing” Qatar’s suggestion to form an alliance of five countries including Iraq, Iran, Turkey and Syria.

The Qatari-funded Al-Araby Al-Jadeed newspaper discussed “[Saudi Arabia’s] failure” to politically influence Iraq and its resorting to economic questions to “compensate for its loss.” This shows that the rivalry between Qatar and Saudi Arabia to win over Iraq is at its peak.

Ihsan al-Shammari, adviser to former Prime Minister Haider al-Abadi, said, “There is indeed a Qatari-Saudi competition for Iraq. Riyadh and Doha are looking for a greater space to develop ties with Baghdad. The reason for this is that Iraq has stayed impartial regarding the issues of the region. As a result, Iraq can improve the position of both countries in the crisis happening between them.”

He added, “Both Riyadh and Doha are offering Iraq opportunities to improve ties. Iraq has no choice other than balancing ties because siding with the new axes rising in the region would cost it a lot.”

Over the past few days, the official statements published after Iraqi and Qatari figures met focused on “reconstruction” in the Sunni areas freed from IS. Saudi Arabia has previously mentioned that it would take part in this process, but Qatar is also trying to display its power in the Iraqi case.

Abdul Mahdi’s new government knows that the Saudi-Qatari political and economic competition for Iraq is at its peak. At this time, Iraq needs the support of both rich states to reconstruct the freed Sunni areas that both Riyadh and Doha have warned against “marginalizing.” Yet the question is whether the new government will be capable of balancing ties between both sides.

Senior researcher at the National Endowment for Democracy in Washington Rahman al-Jobori told Al-Monitor, “Iraq must ignore the Saudi-Qatari rivalry and decide on its vision for the region and itself. It is therefore important that Iraq bases its ties on what interests it as opposed to foreign interests.”