Iran, Iraq forge ahead with collaboration amid US pressure 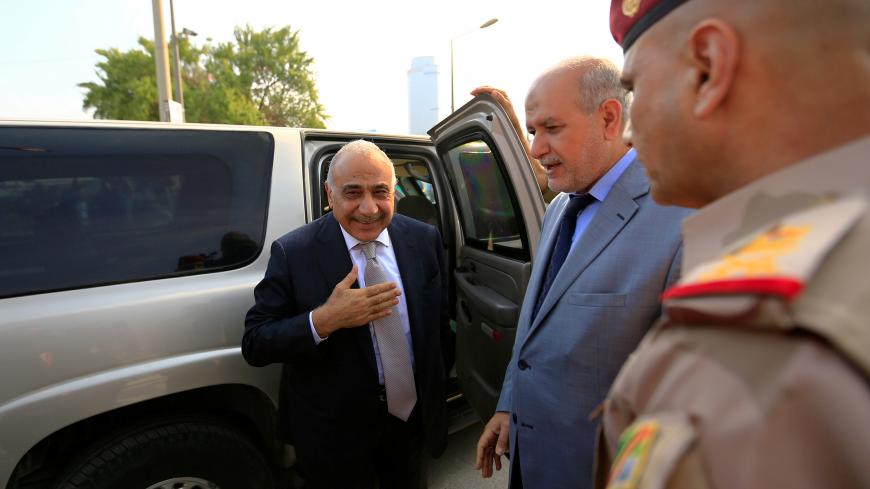 Apart from meeting with Rouhani, the Iraqi leader also met with Supreme Leader Ayatollah Ali Khamenei and attended a joint meeting of the Iranian and Iraqi business sectors at the Iran Chamber of Commerce. The visit came less than a month after Rouhani’s visit to Iraq — the first by the Iranian president since taking office in 2013 — in which the two sides reached a number of important agreements, mostly on economic issues.

The increased frequency of high-level meetings between Iranian and Iraqi officials, as well as Abdul Mahdi's busy schedule while in Tehran, sparked fresh discussion on the growing ties between the two neighbors. In fact, taking into account Abdul Mahdi’s agenda in Iran, as well as the regional and international circumstances surrounding the visit, it could be said that the visit was important from three main aspects.

First and foremost, the visit came amid increased pressure from the United States to limit Iran’s influence in Iraq, giving the visit a symbolic aspect. Although the US administration agreed on March 20 to extend the sanctions waiver for Iraq, so it can import gas and electricity from Iran for a 90-day period, it has been pressuring Baghdad to eliminate its energy dependence on Tehran.

However, Iraq’s parliamentary speaker Mohammed al-Halbusi said March 30 that his country needs at least three years to become “economically independent.” Until then, Iraq needs to continue importing energy. Furthermore, Abdul Mahdi himself previously emphasized that his country is "not obliged" to abide by US sanctions against Iran. One of the main topics of discussion during both Rouhani’s visit to Baghdad and Abdul Mahdi’s visit to Tehran was how to bypass the sanctions in bilateral economic ties.

Apart from the sanctions, Washington has tried to dissuade Iraqi officials from expanding relations with the Islamic Republic by trying to depict Iran's role in Iraq as negative and destructive. Following Rouhani’s visit to Iraq in March, US Special Representative for Iran Brian Hook claimed that Iran wants to turn Iraq into a province. Before Abdul Mahdi’s departure to Tehran, Hook said Iran was responsible for the deaths of more than 600 American troops in Iraq.

Under such circumstances, Abdul Mahdi’s visit and his expressed willingness to develop ties with the Islamic Republic were interpreted by the Iranian media as signs of Baghdad’s indifference toward US positions. For instance, IRIB news agency, which is affiliated with Iran’s state broadcaster, wrote that Abdul Mahdi's "visit to Iran has a special message for the United States." Iranian First Vice President Eshaq Jahangiri expressed the same view. During his meeting with Abdul Mahdi April 7, he said, “The clear message is that despite the American hostilities, Tehran and Baghdad are determined to comprehensively expand their ties.”

The diplomatic aspect of Abdul Mahdi’s visit was no less important. Two days before his trip, he hosted a high-ranking Saudi delegation, headed by Saudi Trade Minister Majid bin Abdullah al-Qasabi. The Saudi official was not only tasked with reopening the Saudi Consulate in Baghdad after nearly three decades of closure, but also with strengthening economic ties between the two countries, including providing Iraq with $1 billion in loans. The visit, a clear sign of Riyadh’s desire to initiate a rapprochement with Baghdad, was interpreted as being aimed at curbing Iran’s influence in Iraq.

However, not only did the Saudi charm offensive not affect Abdul Mahdi’s bid for closer relations with the Islamic Republic, it apparently made him eager to play a mediating role between the two rivals. Upon the Iraqi leader’s arrival in Tehran, the media reported that an Iraqi mediation plan was to be presented to Tehran. According to media reports, the plan has been in the works since Abdul Mahdi’s visit to Egypt in March, and it will be discussed with Saudi officials during his visit to Riyadh next month.

Although the two sides have not confirmed those reports, Rouhani’s reference to regional issues in his joint press conference with Abdul Mahdi could indicate that they addressed the issue during their meeting. “The [situation of] the region was one of the issues discussed between the two sides,” Rouhani said, adding that “we have common viewpoints on many regional issues.” As such, it seems Baghdad is trying to build upon its current favorable relations with both Tehran and Riyadh to push them toward a compromise.

The third yet most important aspect of Abdul Mahdi’s visit to Tehran was the economic aspect. Economic issues dominated the visit, with both sides declaring a desire to enhance annual bilateral trade to $20 billion within the next three years. According to Reza Rahmani, the Iranian minister of industry, mines and trade, the two sides are also working on a free trade agreement. Separately, Iranian Oil Minister Bijan Zanganeh announced that the two sides would start working on the development of two shared oil fields. Media also reported that Iran’s central bank head Abdolnaser Hemmati will soon travel to Baghdad to personally oversee the implementation of financial agreements.

Given the current situation, with the United States determined to pursue a policy of imposing “maximum pressure” on the Islamic Republic through economic sanctions, Iraq’s approach of not giving in to the pressure, and thereby continuing its economic interactions with Iran, is of great significance to Tehran. Meanwhile, as both Iran and Saudi Arabia redefine their relations with Iraq, giving more weight to the economic aspect, the Iranian-Saudi rivalry could take on a geo-economic characteristic, gradually replacing the traditional geopolitical one. This, in turn, would further decrease the risk of an escalation between the two sides, while making it easier for Baghdad to pursue a balanced foreign policy toward its two powerful neighbors.