The Iranian president’s recent visit to Iraq and a possible first trip to Syria since his taking office in 2013 indicate a growing role for the Rouhani administration on regional files. 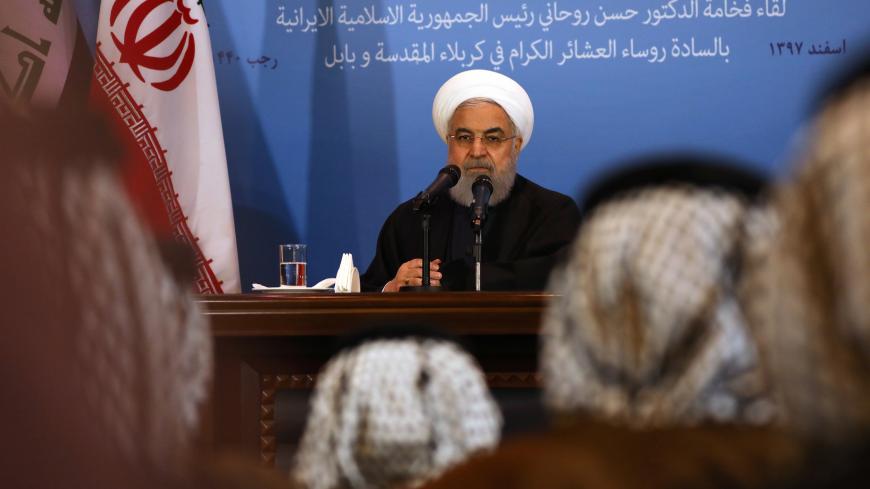 Iranian President Hassan Rouhani’s recent landmark trip to Iraq was closely monitored and discussed from various aspects by the media and analysts around the world. Some observers put their focus on the bilateral aspect, talking about the importance of the visit in terms of Iran’s growing influence in Iraq, while others analyzed it within the context of Iran’s plans to overcome the US sanctions. There have been also debates on the meaning of Rouhani’s trip for internal political divisions in Iran and Iraq.

But a largely ignored — and yet very important — aspect of the Iranian president’s three-day visit to Iraq is the explicit and implicit implications of the trip for Iran’s policy in Syria.

The first point in this regard is related to Iran’s plans for the process of Syria’s postwar reconstruction. After concluding a number of economic agreements and memorandums of understanding with the Syrian government over the past several months, it seems that Iran is moving forward with more concrete plan for playing an active role in Syria’s reconstruction.

One of the main agreements signed during Rouhani’s visit to Baghdad was on the construction of a railway connecting Iran’s Shalamcheh border crossing to Basra. This, in fact, is a part of Iran’s plan to establish a rail connection between its western borders and Syria, to be stretched toward Syria’s Mediterranean port of Latakia. The railway is defined within Tehran’s longer-term plan for achieving a central role in China’s Belt and Road Initiative, acting as a transit hub between the East and the West. At the same time, some reports published during Rouhani’s visit to Iraq indicate that the Syrian government is going to hand over the management of the Latakia port’s container terminal to Iran. As such, Tehran is apparently speeding up its ambitious transit plan by simultaneously reaching out to the Syrian and Iraqi governments.

On the other hand, upon Rouhani’s departure to Iraq on March 11, the head of Iran’s Chamber of Commerce, Gholamhossein Shafei, unveiled another economic plan involving both Iraq and Syria. “Given Iran’s future plans for more participation in economic activities in Syria, the Iranian Chamber proposes a trilateral treaty between Iran, Iraq and Syria based on free trade,” Shafei said. It’s not clear whether the idea was discussed during Rouhani’s talks with the Iraqi officials, but it means that Iran is mulling the establishment of new economic structures in the region with the participation of “friendly states.” While Rouhani was visiting Baghdad, a Syrian trade delegation was in Tehran, conducting negotiations with Iranian economic officials. The talks were reportedly concluded with the signing of 18 memorandums of understanding.

The abovementioned developments mean that Iran is apparently defining the issue of Syria’s reconstruction, as well as its economic presence in postwar Syria within a regional framework. Although Iran’s new push for developing economic ties with its neighbors is widely seen as an attempt to circumvent the US sanctions, Tehran’s move into this direction is apparently taking a more structured and multilateral form. This would herald the emergence of a “regional geo-economic agenda” in Iranian foreign policy, with Iraq and Syria as its two main pillars.

The political importance of Rouhani’s visit for Iran’s Syrian agenda was no less important. This aspect of the issue should be seen as a follow-up to the recent visit of Syrian President Bashar al-Assad to Tehran, where he met with Iranian Supreme Leader Ayatollah Ali Khamenei as well as Rouhani. Assessing Assad’s visit to Tehran as having been successful, Iran’s Ambassador to Syria Javad Torkabadi on March 11 talked of Rouhani’s possible visit to Damascus in the near future. Although no concrete details have been announced so far on this issue, the possible visit could signal a message to the world that Iran’s influence in Syria is not limited to the military sphere and has a political wing as well.

In other words, although the common narrative is that Iran’s regional policy is effectively conducted by the Islamic Revolutionary Guard Corps (IRGC) and especially its external arm, the Quds Force, the Iranian president’s recent visit to Iraq and his possible visit to Syria indicate a growing role for the Iranian administration in regional files. This does not mean that Rouhani is pursuing a different agenda from what’s been agreed upon at the highest level of the Islamic Republic's political establishment, nor does it mean that Rouhani is trying to sideline the IRGC. Instead, this might indicate a kind of “division of labor” in the making between the two institutions, whereby the IRGC’s military achievements and security influence in the region would be translated into concrete political and economic benefits by the Rouhani administration.

As such, it comes with no surprise that Abdollah Ganji, managing director of conservative newspaper Javan, which is close to the IRGC, called on Rouhani to organize a trip to Syria immediately after returning from Iraq. This emerging division of labor could also make the realization of an understanding between Iran and its rivals regarding the region, including Syria, more likely. That’s because other states would be assured that they don’t have to deal with different Iranian agendas at the same time.

And Rouhani's meeting with Faleh al-Fayyad, the head of Iraq’s Popular Mobilization Units (PMU), may provide insight into one of the most challenging aspects of Iran’s presence in Syria, the future role of the pro-Iran armed groups. Once known as a rather loose alliance of Iraqi Shiite groups combating the Islamic State, the PMU is now considered by Tehran to be at the same level as Iraq’s official governmental institutions, with its head included in the list of the Iraqi officials to be met by the Iranian president.

The same pattern can be expected to be applied to pro-Iran groups in Syria. In other words, the most desirable scenario for Iran would be to help those groups unify under a single banner and closely work with the future Syrian government while staying loyal to the Islamic Republic. Whether or not such a scenario can be realized is a matter of wait and see, but this could be the best way for Iran to preserve its influence in postwar Syria.