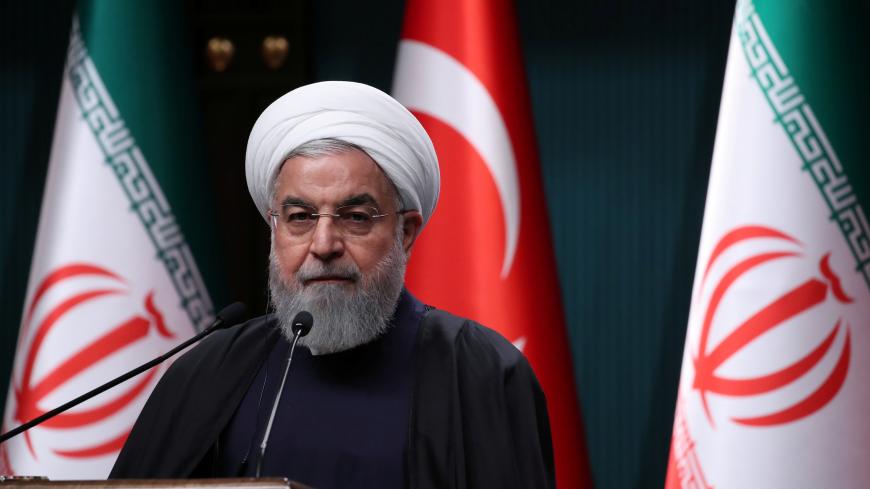 “I remember that it was the first of Esfand,” the former senior Iranian official recalled, referring to Feb. 20 in the Iranian calendar, “I was at the Supreme National Security Council with Mr. Rouhani, and I told him that we won’t have any vacation for Nowruz this year. He asked: ‘What do you mean?’ I responded that I would be at his service.” The prediction turned out to be true.

As secretary of Iran’s top decision-making body, Hassan Rouhani spent the Iranian New Year holidays of March 2003 coordinating its daily meetings. The sessions were not held at the ordinary address in downtown Tehran. Rather, they were convened at the Center for Strategic Research, a think tank that Rouhani headed, overlooking a former palace of the shah in the leafy north of the Iranian capital. In contrast, the Supreme National Security Council had only met once every week or two, even in the months prior to the US-led invasion of Iraq.

Almost 16 years later, Rouhani will embark on his first official trip to Iran’s western neighbor as president. The landmark visit next week has been preceded by a string of trips by his first vice president, oil minister, the governor of the Iranian central bank and other top officials. In mid-January, Foreign Minister Mohammad Javad Zarif spent five straight days touring the country.

Rouhani will not land at a remote air base in the dark and promptly leave Iraq without having met any top official. Rather, he will be accompanied by a major political and trade delegation and be feted by an array of senior Iraqis, including Prime Minister Adel Abdul Mahdi as well as President Barham Salih, who formally extended this invitation. Rouhani met parliamentary speaker Mohammed al-Halbusi in Iran on March 7 but can be expected to meet with lawmakers, too. In line with the agenda of Zarif’s tour in January, meetings will likely also be held with other prominent figures, such as former Prime Minister Nouri al-Maliki, Popular Mobilization Units commander Hadi al-Amiri and National Wisdom Movement leader Ammar al-Hakim.

The visit is of great significance because it has both domestic and international dimensions, and relatedly, also due to its timing.

The Trump administration has sought to curtail Iran’s nuclear and missile programs as well as its regional influence through the reimposition of harsh sanctions. One key target of the United States is thus Iran’s trade with Iraq, which has ballooned since the downfall of Saddam Hussein in 2003.

Iran has not sat idly by amid the pressure. Rouhani’s visit will focus on trade and investment. At present, bilateral exchanges stand at $12 billion per year, and the two sides seek to increase it to $20 billion. Indeed, while US sanctions have sought to restrict Iran’s regional linkages, data suggest that the opposite has occurred. Isolated from international markets, Iran has focused its energy on its neighbors. Moreover, as sanctions have weakened the rial, Iranian goods and services have become more attractive. As a result, back in October, Iraq even overtook China as Iran’s prime non-oil export market.

One major contention is US pressure on Iraq over its imports of Iranian natural gas and electricity, which have left Baghdad stuck between a rock and a hard place. In December, the Trump administration issued a second waiver that allowed Iraq to continue paying for such imports for another 90 days. The Iraqis have responded by saying that they need around two years to adapt, and last month, reportedly signed a one-year contract to renew electricity imports from Iran. The government in Baghdad cannot afford renewed civil unrest over electricity shortages, particularly as summer approaches.

Yet it ought to be noted that while Iraq’s energy reliance on Iran has grabbed headlines and become the focus of US attention, such trade only makes up one-quarter of the growing bilateral trade volume. In this vein, the two sides can be expected to discuss the development of banking and other infrastructure to facilitate broader economic exchanges, including the effort to create a free trade zone along the border. The Iraqi side can also be expected to seek progress on a number of other issues, including longstanding disputes related to the border and water rights.

Another crucial aspect of the visit will be the question of whether Rouhani will meet with the most powerful figure in Iraq, Grand Ayatollah Ali al-Sistani.

The Iranian president’s predecessor, Mahmoud Ahmadinejad (2005-13), was notably boycotted by the supreme religious authority, who carefully manages his audiences with dignitaries to send important signals to Baghdad and foreign capitals alike. Therefore, when it comes to Iranian officials, the credibility boost of a meeting with the grand ayatollah — who has a large following inside Iran — functions as a vivid example of how influence is not a one-way street in the bilateral relationship.

Indeed, beyond avoiding partisanship at home, the top cleric also insists on Iraq maintaining balanced foreign relations. For instance, his office has condemned Trump over his statement that he wants to keep US forces in Iraq to “watch Iran.” It has additionally clarified that Iran’s aid in the fight against the Islamic State is welcomed only if offered via the Iraqi government and if it doesn’t affect Iraq’s sovereignty. Of further note, the top cleric in Iraq has been loath to offer Quds Force commander Qasem Soleimani an open audience.

Therefore, a meeting between Rouhani and the supreme religious authority would send a powerful message to three key audiences.

First, to Iraqi leaders, some of whom may prefer to deal with other centers of power in Iran — such as the Quds Force — but who also need the top cleric’s tacit blessing.

Second, to Iranian leaders, who pay very close attention to the grand ayatollah as not only a major source of influence but also a bellwether of Iran’s standing with a key neighbor.

Third, such a meeting would make clear to the Trump administration and its Arab allies that while Iraq is open to engagement to achieve mutual benefits, it will neither abandon Iran nor allow itself to be used as a launchpad against any third country.

Against this backdrop, it is important to note that the Iranian Foreign Ministry is presently on the offensive to defend its authority, as US pressure has empowered its hard-line detractors. The ministry recently received a boost when Zarif’s attempted resignation — triggered by his being excluded from meetings with Syria’s visiting president — rallied most political elites and much of the public behind it. Indeed, even Soleimani — who has enjoyed great influence over regional policies — had to come out to describe Zarif as “responsible for the foreign policy of the Islamic Republic of Iran,” adding that the chief diplomat enjoys the “approval of senior officials, particularly the leader of the Islamic Revolution.”

As such, boosted by this support, Rouhani’s landmark visit to Iraq — and particularly if it involves a meeting with Grand Ayatollah Sistani — signals that his administration may be growing bolder about asserting its authority on regional files.