With frequent visits between Tehran and Baghdad, the question arises of whether Iranian politics are seeping into Iraq and what that means for the country's future. 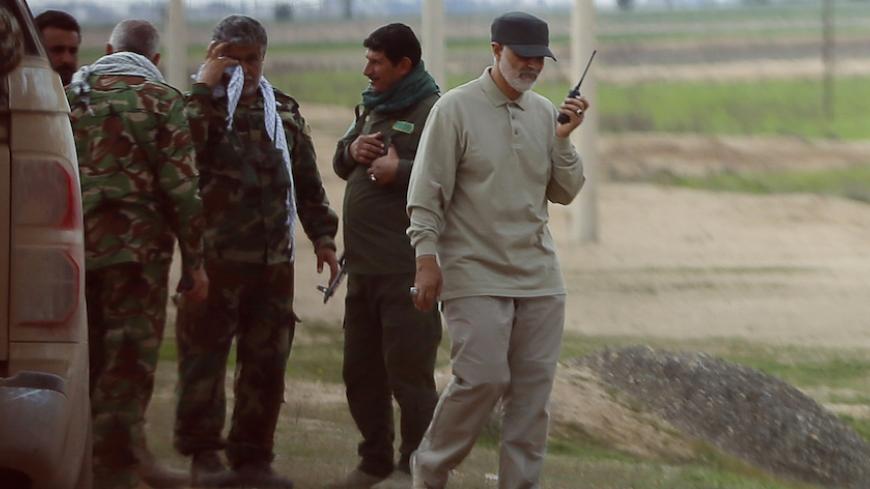 One of the effects of the rise of the Islamic State (IS) has been the emergence of Qasem Soleimani, head of Iran’s Islamic Revolutionary Guard Corps’ (IRGC) Quds Force, as the foremost military commander in Iraq. This has been particularly evident in the absence of the US military and with the establishment of the Popular Mobilization Units.

However, while his military clout has expanded, Soleimani’s political influence appears to be increasingly checked. Indeed, today, the most powerful Iranian in Iraq is arguably Grand Ayatollah Ali al-Sistani. While in the making for years, this trajectory has accelerated following IS’ blitz in northern Iraq last summer. The fall of Mosul and increasing tensions with the Kurdistan Regional Government and Sunni leaders did not singlehandedly end former Iraqi Prime Minister Nouri al-Maliki’s rule. Rather, it was the disapproval of the grand ayatollah. Neither Soleimani’s personal backing nor the highest number of votes for his bloc and for his person could shield Maliki from Najaf.

Developments over the past year, including the ascendance of current Iraqi Prime Minister Haider al-Abadi, also divulge another key aspect of Iranian influence in Iraq — the impact of the rise of moderates in Tehran.

Since taking office in August 2013, Iranian President Hassan Rouhani has reiterated that his government sees the region as its priority. Mohammad Javad Zarif, who led intense talks that concluded with Iran’s nuclear deal with six world powers in July, did not make the United States, France or Russia his first destination as foreign minister. Instead, he chose to visit Iraq. Not only has he frequently traveled westward over the past two years, but notably made a habit of paying a visit to the grand ayatollah in Najaf before going to Baghdad. Of note, Zarif even traveled directly to Najaf following a round of nuclear negotiations in Switzerland earlier this year. The current moderate secretary of Iran’s Supreme National Security Council, Ali Shamkhani, has also come to increasingly play a role in the shaping of regional policy. An ethnic Iranian Arab who served as defense minister under Reformist ex-President Mohammad Khatami, Shamkhani was appointed by Rouhani and has the confidence of Supreme Leader Ayatollah Ali Khamenei. Notably, amid the deadlock over Maliki’s future last summer, Shamkhani’s visit with the grand ayatollah in Najaf helped facilitate the peaceful power transition in Baghdad.

With Iranian moderates energized by the nuclear deal, and the grand ayatollah more influential than ever, it appears that the dynamics of last summer are once again being repeated.

Iraqi sources say the Shiite political leadership in Baghdad is divided over who should head the National Iraqi Alliance (NIA), the coalition that brings together the main Shiite Islamist factions. While the State of Law Coalition is pushing for leading Dawa Party member Ali al-Adib to take the helm, Islamic Supreme Council of Iraq (ISCI) leader Ammar al-Hakim is reportedly putting up a fight. This struggle may be part of broader intra-Shiite dynamics. An Iraqi source told Al-Monitor, “The people pushing for al-Adib versus al-Hakim are the same ones who support al-Maliki versus al-Abadi; i.e., a big chunk of State of Law, but not necessarily Dawa. However, on top of that, it also includes many non-Maliki/State of Law-aligned Dawa MPs who don’t want to see the NIA leadership go to a rival party/bloc.” While this struggle is evidently organic in the sense that it is driven by domestic politics, the optics of travel schedules and meetings in past days and weeks suggest that factional differences in Tehran are to some extent being played out in Baghdad. The reverse could also potentially hold true.

During his visit to Tehran last week, Hakim — who has spent most of his life in Iran, where ISCI was established during the 1980-1988 Iran-Iraq War — met with senior Iranian officials, including prominent figures associated with the moderate camp. These include Ayatollah Hashemi Rafsanjani, the former president widely seen as Rouhani’s main patron, as well as Zarif and Shamkhani. Customarily, Hakim also met with Khamenei.

Of note, Zarif met with Hakim during his recent trip to Iraq. A well-placed Iraqi source told Al-Monitor that this was on the initiative of the Iranian foreign minister, claiming that Zarif requested a dinner with Hakim in Baghdad. Zarif’s visit to the Iraqi capital followed a brief stay in Najaf, where he met with the grand ayatollah. Bearing this in mind, if Iranian moderates are lobbying on behalf of Hakim, their success would “look like a victory over the Soleimani/Maliki camp in Iraq,” Hayder al-Khoei of Chatham House told Al-Monitor.

Also present in Tehran at the same time as Hakim was Maliki, who observers see as maintaining a close relationship with the Quds Force commander. In a sign that Iran has not discarded Maliki, despite Abadi’s ascent, Maliki met with the Iranian supreme leader during his visit. Of note, Zarif, who did not meet with Maliki during his recent trip to Baghdad, did not see Maliki in Tehran either. In contrast, Khoei told Al-Monitor, Soleimani is “fully” behind Maliki and “sees him as [Hezbollah leader] Hassan Nasrallah No. 2" — a staunch Arab ally with views in line with Iranian policy.

While the optics suggest that factional politics in Tehran may be played out in Baghdad, Iranian sources dismiss the latter. In an interview with Al-Monitor on condition of anonymity, a senior Iranian source with close knowledge of policy toward Iraq said, “Zarif’s failure to meet with Maliki was not meant to make any political point.” The source emphasized that “Zarif was ill that day [when Maliki was recently in Iran], and while in Iraq, Zarif’s visit was very short. There is nothing between the lines.”

Regardless of actual motives, perceptions may prove to be more powerful than reality. For now, it appears that Tehran is avoiding direct and overt involvement in the Shiite leadership dispute in Baghdad. Iran will likely maintain this posture until and unless the situation is seen as spiraling out of control, at which point it may choose to intervene to help forge a consensus. Indeed, this has been the playbook in recent years. This, in turn, may cause the Shiite leadership in Baghdad to pre-emptively reach out to the grand ayatollah, who also seeks to avoid becoming too embroiled in factional politics. In this waiting game, which could potentially turn explosive, the main victim may once again be ordinary Iraqis, who are mired not only in a war against IS in the trenches, but also corruption and factionalism at home.