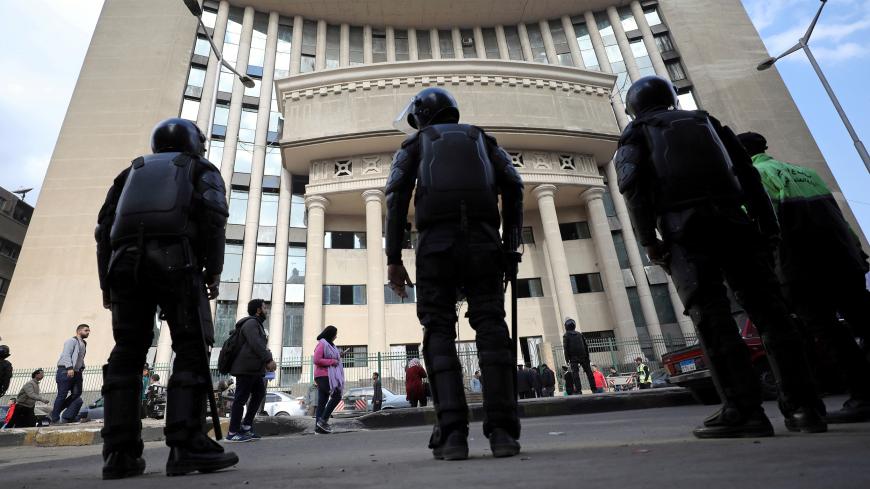 Egypt will convene a committee next month tasked with responding to, and trying to counter, claims of human rights abuses against the often-accused country.

The new body, euphemistically named the Supreme Committee for Human Rights, will be chaired by a Foreign Ministry representative. The committee will seek to discredit criticism from independent and international rights groups.

Mohammed al-Ghoul, a member of parliament's Human Rights Committee, told Al-Monitor, “The new committee will respond to suspicious reports issued by official or unofficial bodies criticizing authorities in Egypt.” It will also have the executive authority to file lawsuits against those bodies before the United Nations.

To independent rights advocates in Egypt, this new committee is nothing but a facade to hide human rights violations perpetrated by authorities, especially torture inside prisons and forced disappearances.

Gamal Eid, head of the Arabic Network for Human Rights Information (ANHRI), opposes the new committee. He told Al-Monitor that its avowed aims include improving the government's image and responding to reports issued by professional and independent bodies that lambast Egypt’s record on human rights. He said it does not aim to end existing violations.

The decision to form the committee has disappointed many rights advocates. But the action has some supporters.

“It's a new step to confront some bodies that reject the existence of the Egyptian regime” and want it to fail, Dalia Ziada, director of the Liberal Democracy Institute of Egypt, told Al-Monitor. “This committee will face the smear campaigns launched by rights groups that have suspicious agendas such as Amnesty International, Human Rights Watch [HRW] and others."

She claimed these groups are financed by Qatar and "the terrorist Muslim Brotherhood," and work for them to criticize and defame the Egyptian regime.

Ziada said she is ready to join the committee to prepare reports against such human rights organizations.

In September 2017, HRW issued a report on torture in Egyptian prisons, highlighting the systematic methods of torture used by security authorities against dissidents. The report raised the ire of Egyptian authorities and, surprisingly, some local organizations that consider themselves independent human rights groups, including Ziada's institute.

In response to that report, Ziada's group quickly launched a campaign titled “Watch HRW" and prepared a report on alleged breaches of Egyptian and international laws that she claimed HRW's report contained. She submitted her paper to the UN, which took no action against HRW, she said.

Ziada said she has paid visits to Egyptian prisons and saw detainees being treated well. “We are at war with HRW, which is working to enforce foreign agendas," she added.

On May 22, HRW published a letter asking the president of FIFA, the international soccer governing body, to pressure Egyptian authorities to confront a vicious anti-gay campaign that HRW fears will compromise the safety of athletes and spectators attending the 2019 Africa U-23 Cup of Nations, which Egypt will host.

In response, Ziada accused HRW of trying to prevent Egypt from hosting the cup. “This is the same organization that defends in cold blood the terrorist organizations that ravaged the Middle East,” she said in a press statement, again accusing HRW of receiving funds from states including Turkey and Qatar.

Ziada’s positions seem to be in harmony with the Egyptian authorities.

ANHRI's Eid said Ziada's center is one of dozens that popped up claiming to be rights bodies after the 2013 coup, supporting the government’s measures. These centers "work to deny all the rights violations perpetrated by the Egyptian government and to confront other bodies blasting the human rights situation in Egypt,” Eid said.

It seems groups like Ziada's have become a big asset for the state-run media outlets in their campaign against dissidents and independent human rights groups by supposedly conferring legitimacy on the practices of Egyptian security services.

Mohamed Lotfy, executive director of the Egyptian Commission for Rights and Freedoms, an independent rights organization, told Al-Monitor these pro-government bodies deliberately turn a blind eye to the abuses committed in Egypt. At the same time, they launch mud-slinging campaigns against the independent organizations that dare to speak up about these abuses, accusing them of being agents for others states.

According to the Egyptian Commission for Rights and Freedoms, there were 378 forced disappearances in Egypt from August 2016 to August 2017. Other rights organizations suggest that the number from 2013 until August 2018 was more than 6,400.

But Ziada insisted in a March interview with al-Watan news that there are no forced disappearances in Egypt and those promoting these tallies seek to “play down the accomplishments being made in the country.”

Eid said there are now myriad groups in Egypt paradoxically called "government-organized nongovernmental organizations" — also known as GONGOs, or government-organized NGOs. While these groups are multiplying, the number of independent rights bodies has fallen to fewer than 10 since 2014 "due to the legal and security restrictions now in place in Egypt,” he added.

The pro-government groups, most with names that belie their natures, include the Forum for Development and Human Rights Dialogue, chaired by Said Abdel Hafez, who staunchly defends abuses by Egyptian police. In remarks to the media in July, Abdel Hafez blasted human rights groups calling for abolishing the death penalty in Egypt.

Other government-organized NGOs include the Maat Foundation for Peace, Development and Human Rights. It is chaired by Ayman Aqeel, who spares no effort responding to criticism of Egypt's human rights record. There is also the Egyptian Union for Human Rights, which called in 2015 for referring detainees who are charged with terror offenses to military courts.

Also on the list is the United National Organization for Human Rights, which defended Egyptian authorities against global rights bodies that had criticized the regime at the International Human Rights Council in Geneva.

Dwarfing those pro-government groups is the Coalition of Civil Society Organizations, an alliance of 228 Egyptian government-organized NGOs. The coalition participates in many meetings held by the International Human Rights Council, defending Egyptian authorities against what they claim are “smear campaigns” waged by enemies of the state.

As for the government's new Supreme Committee for Human Rights, when it convenes in January it will be made up of representatives from the ministries of defense, social solidarity, justice, parliamentary affairs, and interior, as well as from the General Intelligence Directorate, Administrative Control Authority, National Council for Women (which is closely affiliated with the government), National Council For Childhood and Motherhood, State Information Service and the public prosecutor's office. Members will also be able to recruit experts as necessary.