Activists, opposition politicians and journalists have been the targets of an escalating crackdown on human rights in Egypt. 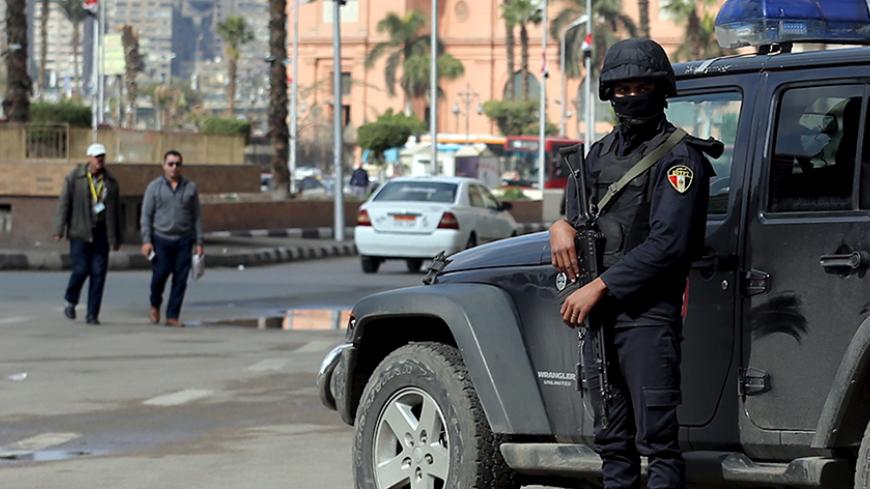 HRW is one of many groups documenting human rights violations under Sisi's regime. Other groups include the Arabic Network for Human Rights Information (ANHRI), Amnesty International and the Egyptian Center for Economic and Social Rights (ECESR), to name just a few.

In its annual report released in February, ANHRI said that while 2015 saw a decline in the number of protests compared with 2014, this was due to broadened enforcement of the Anti-Protest Law, as well as the detention and persecution of large numbers of protesters.

In an interview with Al-Monitor, ANHRI director Gamal Eid said, “The current situation of human rights in Egypt is worse than it was during the tenures of former presidents Hosni Mubarak and Anwar Sadat. This can be [shown] by the number of journalists in prison, which stands at 60, according to the report’s estimation.”

Eid also pointed to growing incidents of torture in prisons and places of detention, as well as in unfair trials against activists and death sentences in political cases.

Furthermore, the ANHRI report said freedom of expression suffered in 2015, as Egypt worked to silence dissidents, journalists and media professionals. The report logged a total of 343 such violations last year.

Some of the government's violations of human rights included 51 arrests and detentions, five "enforced disappearances" (abductions), 15 unjust court rulings and two travel bans, according to ANHRI. The current regime has also broadened its use of legislative power, passing a number of anti-freedom laws.

The report also monitored what it described as fierce attacks by the regime against human rights organizations and defenders. For example, the report mentioned Azza Soliman, a prominent lawyer and human rights defender who was among 15 charged March 24 with demonstrating without a permit. ANHRI said all of those arrested were later acquitted.

On Aug. 18, security forces stormed the house of human rights lawyer Abdel-Aziz Yusuf in Al-Sharqiyah governorate and arrested him. In another case, according to ANHRI, on Oct. 21 the Egyptian security forces raided the headquarters of Mada Foundation for Media Development. Mada Foundation's director, Hisham Gaafar, was arrested and "detained in an unknown place" for days before being imprisoned pending an investigation.

The report also mentions journalist Hossam Bahgat, who on Nov. 8 was detained at the Military Intelligence Services' building, where he was interrogated as a defendant. The Military Prosecution Department then decided to imprison Bahgat for four days pending an investigation, but he was released two days later.

The latest report published by Amnesty International on Egypt stated that authorities target those who criticize the government or express dissent. Media workers who documented rights violations or questioned authorities’ political motivations faced arrest and prosecution, while journalists who reported on army activities faced unfair trials before military courts, according to the group.

The same report said thousands of actual and suspected government opponents were arrested during protests, at their homes or on the street. Many were not told why they were being arrested and were arbitrarily held in pre-trial detention for periods that in some cases exceeded a year, or else were brought before the courts and sentenced to lengthy prison terms after unfair trials.

In its annual report, HRW said that in response to a rising threat from armed extremists based in the Sinai Peninsula and other anti-government groups, the authorities have used torture, abducted scores of citizens, banned many others from travel and possibly committed extrajudicial killings.

The report added that the Interior Ministry — in particular the ministry’s National Security Agency, formerly known as State Security — has returned to practices that were common before the 2011 uprising, effectively operating outside Egypt’s laws altogether.

According to HRW, National Security officers often target political activists for abduction. National Security officers and other members of the police also regularly use torture in their investigations, HRW said. In December, authorities took action against a dozen officers suspected of involvement in multiple torture cases. Courts preliminarily have sentenced three of them to five years in prison, the report said.

Sameh Samir, a lawyer in the criminal justice unit at ECESR, told Al-Monitor, “There are ongoing crackdowns on the freedom of opinion and expression in the form of increasing incidents of arrest of activists and raids to apartments in the downtown area aimed at thwarting any potential protests.” Often, defendants’ lawyers are not allowed to be present during interrogations, Samir added.

He also said hundreds of abductions have been reported to ECESR by the families of the missing. He noted that prison conditions are worsening. “Prison administrators intend to intensify the torture of detained activists and politicians, using new forms of torture such as denying prisoners access to food and clothing, especially during winter," he told Al-Monitor.

The ANHRI report cited violations committed against prisoners of conscience, with overcrowding, denial of medicine and visitors, and poor treatment being among most frequent complaints. The report also said numerous complaints and nonstop communiques have been filed with the public prosecutor and authorities but have not been investigated.

The report described the types of violence prisoners are subjected to, including electric shock on genitals and other sensitive areas of the body, beating, hanging prisoners by their limbs, as well as tying their hands behind their back in painful positions while beating and molesting them.