Egypt's human rights violations are flooding its prisons with more people than they can handle. 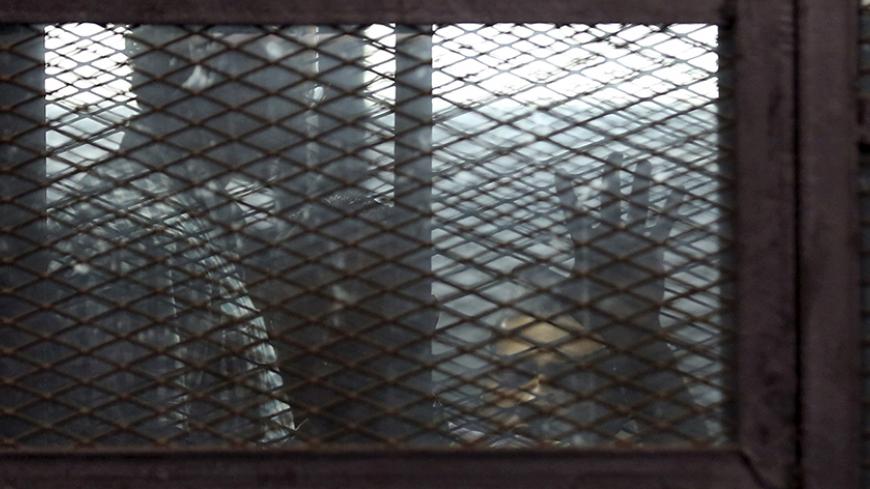 Al Jazeera television journalists Mohamed Fahmy and Baher Mohamed are seen behind bars before hearing the verdict at a court in Cairo, Aug. 29, 2015. - REUTERS/Asmaa Waguih

Egypt's worsening human rights abuses are not going unnoticed. People are being assaulted on many fronts, from travel restrictions and false imprisonment to limits on freedom of expression, torture and killings.

In an example of this trend, President Abdel Fattah al-Sisi issued a presidential decree Jan. 13 designating 100 acres of land for construction of the new Giza Central Prison, a huge structure and its ancillary buildings, in the Giza desert.

Sisi, and Adly Mansour before him, approved 16 new prisons in only 2½ years in response to the detention of thousands of young people. Some facilities are still under construction. The number of prisons in Egypt has risen from 42 to 52 since 2011, according to Gamal Eid, executive director of the Arabic Network for Human Rights Information.

During the rule of the Military Council, and that of deposed President Mohammed Morsi, Egyptian authorities had asserted that Egyptian prisons were free of political prisoners and detainees. However, current rights groups estimate 10,000 detainees are under investigation or awaiting trial in detention centers and prisons, and Eid wrote in a Jan. 13 Twitter post that Egypt now houses around 60,000 political prisoners.

There are no official statistics on the number of inmates in Egyptian prisons. Recently, security agencies have investigated the fate of around 120 Egyptians out of a total of 200 detainees reported to have disappeared under suspicious circumstances, most of them anti-state activists. The Ministry of Interior informed the National Council for Human Rights in Egypt that the aforementioned were either being held pending investigations, were acquitted or escaped prison and are now being sought by authorities.

After a series of incidents in which unarmed civilians were tortured and even killed by police officers inside and outside detention centers in past months, and the subsequent boisterous protests that sometimes required presidential intervention, the prosecutor general’s office put a number of police officers on trial, some of whom were preliminarily put in prison or received other sentences.

Egypt is experiencing an assault on the freedoms of opinion and expression at the hands of security services, under the pretext of safeguarding national security, as per a statement published by the Arabic Network for Human Rights Information. The statement condemned the arrest of journalists and a number of activists affiliated with certain social movements, primarily the April 6 Youth Movement. The movement has said it considers the regime’s attempts to crush it as "failures," further characterizing this era of Egypt’s judiciary as bleak. The Arabic Network views such oppressive conduct as a continuation of the rabid campaign waged by authorities against all factions affiliated with the January 25 Revolution ahead of its commemoration.

In a related incident on Jan. 14, Cairo airport authorities detained poet Omar Hazek and prevented him from traveling to the Netherlands to receive the Oxfam Novib/PEN International Free Expression Award. The incident with Hazek was not the first of its kind. Rights lawyer Tarek Elawady was also detained upon returning from Doha on Jan. 9 when, as he recounted, the scan of his passport raised a warning notification that he was “wanted immediately.” Elawady noted that detention without legal justification is a crime under the Egyptian Constitution.

That same day, security forces raided the home of physician Taher Mokhtar, who was being visited by two of his friends. Officers searched the house and all three were taken to the police station and charged with possessing leaflets calling for the overthrow of the regime. They were further detained pending additional investigations.

Mokhtar is a prominent activist calling for the reform of prison health services and a member of the campaign “Medical Neglect in Prison is a Crime,” which aims to guarantee all detainees their right to medical and health services. He also is an active member of the Doctors’ Syndicate Rights and Freedom Committee, which said on its website that Mokhtar was tasked by the syndicate’s board to follow up on the issue of detainee health conditions in police stations.

Fourteen rights organizations and parties demanded the release of Mokhtar and his companions, saying the detention was a vindictive move against human rights defenders.

Egyptian authorities are not content with merely preventing some citizens active in society from leaving the country. They also are barring the return of others who they allege pose a security risk. At the beginning of January, Egyptian authorities prevented researcher and university professor Amal Grami from entering the country because she was “a threat to national security.” Grami, who specializes in Islamic civilization and gender issues, was detained upon her arrival at Cairo International Airport. She was questioned for about 16 hours and her personal laptop and cellphone were searched. She was subsequently denied entry and deported back to Tunisia, an incident that rights organizations consider blatant police interference in academic liberties.

Grami had been officially invited to speak at the anti-extremism international conference organized by the Library of Alexandria.

She suggested her treatment was probably due to the sharp criticism she has leveled against Tunisian security agencies for their human rights violations. She said authorities might have considered her recent articles published in Egypt’s Al Shorouk newspaper as incitement against Egyptian state institutions, as events in Tunisia intersect with those in Egypt, given the past five years of revolutions in both countries.

Grami added, “No irony is greater than the fact that I am invited to give a lecture about 'Evaluation of Research Methods in Extremism and Terrorism … Outcome and Proposals,' and then relegated to the same category as terrorists!”

In October, Alexandria University canceled, for “security reasons,” a lecture by Essam Heggy, a NASA scientist and former adviser to Mansour. Heggy is known for his critical views about the Egyptian government. After the cancellation, Heggy apologized to students via Facebook, writing, “The administration of Alexandria University lacked the capacity to accommodate your enthusiasm and presence, and decided to cancel the lecture just one day before its date. I would like to thank the university’s administration for tirelessly endeavoring to maintain the homeland’s security, by barring a lecture about the discovery of the planet Mars.”

For his part, former Sisi campaign official Hazem Abdel Azim said, “I am filled with sorrow when I assess the state of the country from [the January 25 Revolution] to date." He said joining Sisi’s campaign was the worst decision of his life.

Amr Hamzawy, a political science professor at the American University in Cairo, said the ongoing oppression of free speech and liberties is beginning to create a republic of fear.