Young women, including students and mothers, are victims of physical and psychological abuse after being arrested and jailed by Egyptian security forces. 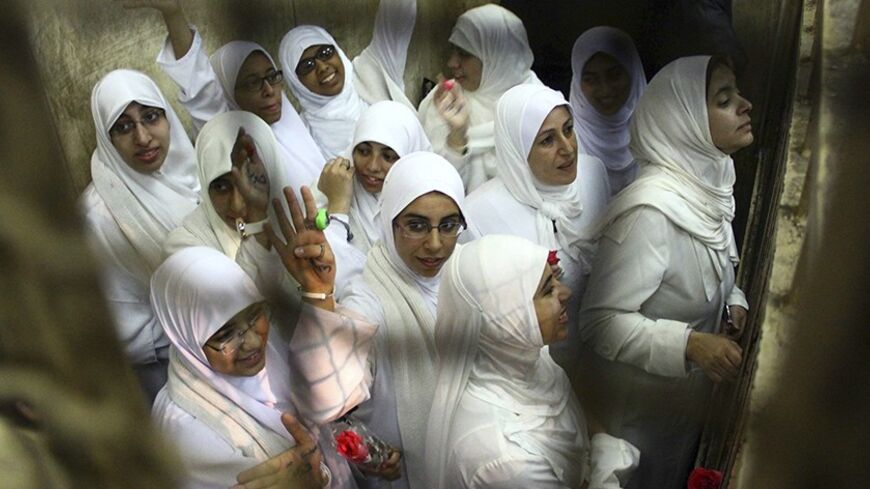 Women who were found guilty of obstructing traffic during a pro-Islamist protest in October gesture during their appeals hearing in Alexandria, Dec. 7, 2013. - REUTERS

In Egypt, women who have been arrested and human rights organizations are raising their voices about the physical and psychological abuse women are subjected to in prisons, detention centers and police departments.

While the number of women arrested since the June 30 events is unknown, according to the Wiki Thawra website 21,317 people were arrested between June 30 and Dec. 31, 2013. This figure includes women, some of whom reported being subject to abuses during and after their arrest.

Tasneem was one of these detainees. A fourth-year student at the Faculty of Medicine at Al-Azhar University, she was arrested on campus on Dec. 30 during a protest organized by the Al-Azhar student group against police having permission to enter university campuses. She told Al-Monitor that a number of security members chased her and grabbed her by her clothes. Tasneem said although she told the security force members she would surrender without their pushing her, one of them dragged her by the hand to force her into a police car. When she fell to the ground, she said nearly 15 security officers gathered around her, kicking her in the back and abdomen and pulled her to the car, where an officer hit her with a baton on sensitive body parts and slapped her face multiple times.

Tasneem said that when she stepped into the car, there was another female student who was bleeding and had scratch marks on her face. Members of the security services were demeaning her and other female students all the way to the police station. She said, “They threatened to rape me and the other girls.”

On that day, Tasneem and another group of female students were referred to the prosecution on charges of offending security forces, vandalizing public facilities and attempting to murder a police officer. They were sentenced to 15 days in prison and then referred to a hospital where they were forced to undergo pregnancy tests, she said.

Speaking to Al-Monitor, Gamal Eid, executive director of the Arabic Network for Human Rights Information (ANHRI), considered the pregnancy test a sexual violation in itself, because it meant subjecting someone to a scientific test against his or her will, and that the tests were forced onto young, unmarried women. He said that society is reluctant to reject such measures when the government provides justification, as happened during the period of military rule. Women were forced to undergo virginity tests, which the military said were necessary out of fear that security members would be accused of raping them.

The following is another story of a detainee, Dahab. Dahad was arrested in the Shubra neighborhood of Cairo on Jan. 14, while she was on her way to the gynecologist. At the time, she was eight months pregnant. Her husband, Ashraf, told Al-Monitor that there happened to be a protest against the referendum on the new constitution. The security forces arrested her along with the protesters, and the prosecution accused her of protesting without a permit. She was detained for 15 days at the Amiriya police station as part of the investigation, and her detention was renewed two consecutive times.

The chief prosecutor refused to release her, even though her husband provided a medical report that confirmed her poor health. While in detention, she felt labor pains, and she was transferred to Al-Zaytoon Hospital, where doctors decided to go for a C-section, given the difficulty of her condition. Dahab gave birth to a girl she named “Horriya,” which is Arabic for freedom. After she left the operating room, the security men handcuffed her to the hospital bed to prevent her from escaping, a security source told Al-Monitor.

Women are not only being beaten or forced into medical tests, but there are cases of harassment that have been documented, such as the individuals arrested while protesting military trials of civilians in front of the Shura Council in November 2013.

Dahab’s lawyer Islam Salameh confirmed to Al-Monitor that there were four cases of women who were raped in prison. He is leading their case, but said he cannot reveal their names or details of what happened out of concern for their safety and privacy.

In previous statements made by Assistant Interior Minister for Human Rights Maj. Gen. Abu Bakr Abdel-Karim, the Interior Ministry has denied the police tortured detainees or took any measures that violated their dignity.

Anas Altikriti, founder and CEO of the Cordoba Foundation in London, said that the defense team for those arrested in Egypt since the breakup of the sit-ins in Rabia al-Adawiya and al-Nahda, received evidence and testimony regarding two cases of rape in prison that occurred at the hands of members of the police force. Altikriti told Al-Monitor the these two cases involve victims who have another nationality — in addition to being Egyptian — and the international team had begun litigation in the states where they hold citizenship.

Sameh Samir, a lawyer at the Egyptian Center for Economic and Social Rights, told Al-Monitor that the new constitution, which was approved by the majority of Egyptians, states in Article 56: “Prison is a house for reform and rehabilitation. Prisons and detention centers shall be subject to judicial oversight. All that which violates the dignity of the person and/or endangers his health is forbidden. The law shall regulate the provisions to reform and rehabilitate those who have been convicted, and to facilitate a decent life once they are released.”

The law, however, is not currently being applied, as the simplest rights that preserve human dignity are not being guaranteed. On the contrary, the security services are dealing with detainees in a way that puts their lives in danger.