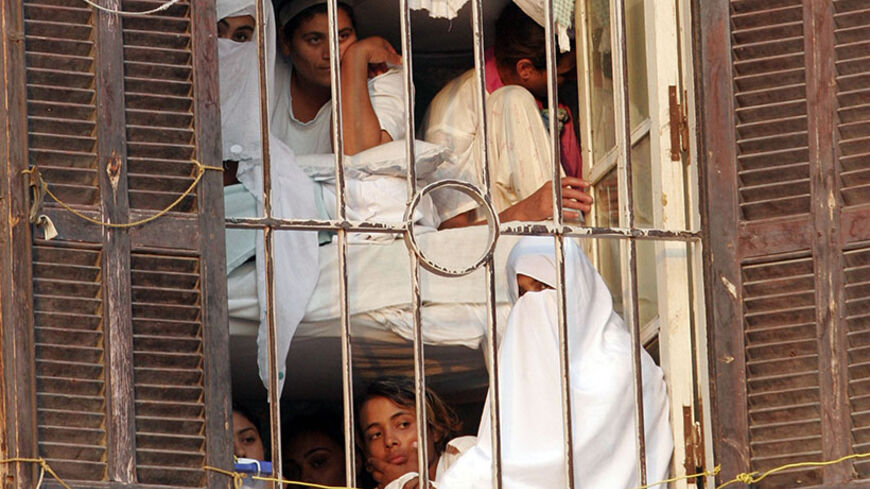 CAIRO — At a time when the Egyptian government has recognized the need to stop physical and sexual violence against women, human rights organizations have registered dozens of cases of physical abuse against women in Egyptian prisons pending trial for political issues.

On June 23, 10 Egyptian human rights organizations filed a joint complaint — of which Al-Monitor obtained a copy — with the Egyptian general prosecutor. They requested that the latter quickly investigate the complaints of female prisoners being subject to torture and physical and sexual abuse, and demanded that protection be speedily provided if the complaints are shown to be valid.

The complaint — signed by the Nadim Human Rights Center, the Association for Freedom of Thought and Expression and the Center for Women's Issues — said that female prisoners have suffered violence by the failure by the government to investigate violations, protect the detainees or refer them to an official doctor who can report on their conditions.

Darine Mutawia, 19, was arrested in front of the Court of the Fifth District on March 30, while she was attending the court session of one of her female colleagues from Al-Azhar University. She spent nearly three months in prison without charge. She said, "We were subjected to all forms of torture, beatings and physical and sexual abuse during our arrest and after it."

Speaking to Al-Monitor immediately following her release from al-Qanater women's prison, north of Cairo, Mutawia recounted the abuse she and her fellow detainees suffered after they were arrested following demonstrations and violent incidents at Al-Azhar University. She said, "During our three months inside the prison, we were verbally and physically harmed the entire time."

"At the beginning of our detention, they put us in wards with female detainees being held for criminal cases," she continued. "They were always stirring us up and provoking problems with us. The prison administration beat us and dragged us, while the criminal detainees would physically harass us."

Mutawia, who was held in the investigations ward with 24 other women for political issues, added, "On June 11, one of the detainees that was with us provoked a problem, resulting from a verbal altercation. The prison administration intervened and beat us with iron and wooden sticks. One of our colleagues was bleeding badly after an officer kicked her forcefully."

According to Mutawia, following this incident, the prison administration separated them into solitary-confinement cells. "They locked me in a bathroom full of insects for four days and forced me to sleep on the floor. They refused to sign off on a medical examination for us after all this physical abuse," she said.

These incidents were not limited to physical abuse, as two of the detainees who spoke to Al-Monitor along with their relatives said they were also subjected to sexual abuse in the detention centers.

The brother of one of the victims, who was released four months ago, told Al-Monitor, "My sister was detained for nine months after participating in a demonstration. She was moved from the police station to the Central Security Camp, then to Damanhour prison. During the period of her detention we were prevented from visiting her multiple times, because we had protested her deteriorating health state."

The victim's brother, who wished not to be named for social and security reasons, added, "After my sister's release, the family discovered that she had been subjected to gang rape within the Central Security Camp. Yet, she refused to talk about it during the period of her detention, since the prison administration had threatened to keep her locked up if she talked to anyone."

The girl's brother, who belongs to the Muslim Brotherhood, said, "My sister is still in a bad psychological state, and we don't expect this issue to end just because she left [prison] and without her getting retribution."

Dozens of female prisoners still inside al-Qanater prison are on hunger strike in protest of the continued attacks and violations of their rights. There has been no real action from the government or oversight bodies to investigate what they were exposed to and to provide legal protection for them until the end of the investigation process.

The Bint al-Thawra (Girl of the Revolution) Facebook page has documented daily violations suffered by the women on hunger strike in Egyptian prisons. The page launched the hashtag campaigns #ReleaseEgyptsGirls and #FreeWomenOnHungerStrike to denounce the practices of the security institutions against the female detainees.

Al-Monitor spoke with Mohammed al-Sarifi, the brother of Karima al-Sarifi, who is being held in al-Qanater prison. He said, "Karima has been on a complete hunger strike for 18 days now, and during our last visit she was experiencing a nervous breakdown and refused to meet us."

"When we visited her after the beatings and collective abuse Karima suffered, along with a number of female detainees in the 'military' ward of al-Qanater prison, her clothes were shredded and there were swellings and bruises on different parts of her body. She refused to take any food and said she was on hunger strike," he added.

"A week after this incident, Karima told us what happened. Female detainees being held on criminal charges had their clothing ripped up and were forced to wear white transparent detainee clothing. They then beat and dragged them and cursed at them," he said.

One of the detained girls, in a written message that was smuggled out of the prison during a visit with her mother, wrote, "None of the human rights organizations have visited us, and the prison administration did not sign off on a medical examination for us, following repeated attacks on us. They only conducted pregnancy tests."

The girl, whose mother refused to name her for fear she would be harmed in prison, related, "During my arrest, I was subjected to severe beating, dragged on the floor and my hijab was removed by soldiers from the Central Security Services and some individuals wearing civilian clothing."

The letter, shown to Al-Monitor, went on, "I was arrested along with three others, and we were blindfolded and thrown into a transfer vehicle full of men who beat and cursed us until they placed us in the Central Security Camp. This was the most difficult stage, as they exerted all kinds of pressure on us — beginning with verbal abuse and reaching physical and sexual harassment — to force us to confess to things we did not do."

The spokesman for the Egyptian Interior Ministry, Maj. Gen. Hani Abdel-Latif, refused to speak about any violations against women in Egyptian prisons.

"These allegations are completely false," he told Al-Monitor. "The Egyptian Interior Ministry welcomes delegations from Egyptian organizations working in the field of human rights, allowing them to visit prisons and ensure that female prisoners are treated properly in accordance with the laws."

Abdel-Latif stressed, "There is no hunger strike among detainees pending trial," adding, "The Brotherhood group is trying to exploit the issue of these girls, but it’s nothing but allegations."

Ever since the security crackdown expanded against demonstrators and those suspected of belonging to the Muslim Brotherhood, all attempts by the families and friends of female detainees to advocate for them have failed. The complaints sent to Egyptian and international organizations have also not led to results. The Egyptian security agencies continue to fail to provide a safe climate and atmosphere for detained women during their pretrial detention.