After their brutal experience in regime detention, freed female detainees are rejected by their society. 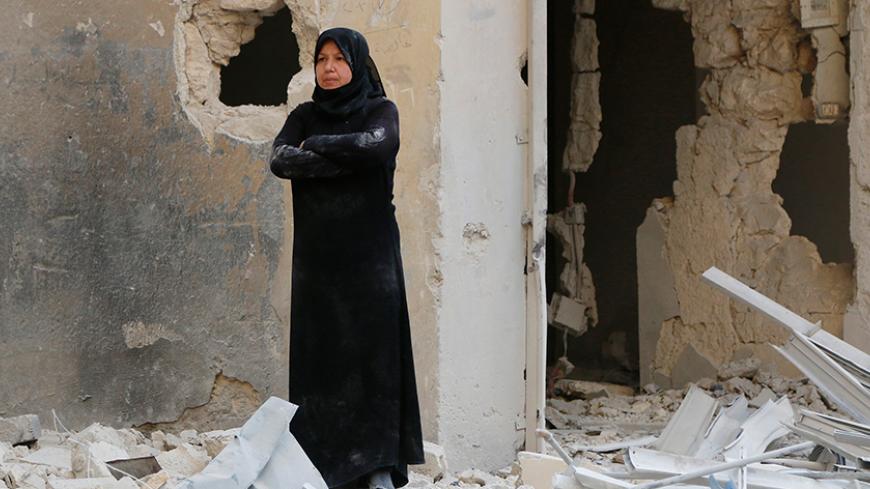 A woman stands on the rubble of damaged buildings in the al-Myassar neighborhood of Aleppo, Feb. 7, 2015. - REUTERS/Hosam Katan

ALEPPO, Syria — Ever since the start of the Syrian revolution in mid-March 2011, the Syrian regime's security forces have spared no effort to arrest peaceful protesters who called for the downfall of the regime. Their waves of arrest were not limited to men; they also included hundreds of women and girls who opposed the Syrian regime.

According to a joint report issued by the Syrian Network for Human rights (SNHR) and the Syrian Center for Statistics and Research, 2,850 women, 120 of whom are girls below 18 years of age, continue to be held by the Syrian security forces across the country.

Meanwhile, the Center for Documentation of Violations in Syria reported about 1,800 cases where women have been arbitrarily detained, including 69 girls who are below 18.

The three organizations confirmed that since March 2011, at least 19 women, including girls below 18, have been killed due to torture during detention.

Although many of the women arrested by the regime made it out of prison, these women had another suffering to deal with outside the prison. They had to face a society whose treatment of women is governed by customs and traditions, and most of the women were subjected to physical abuse and raped by those in charge of the security branches where they were detained.

Um Layal, 45, had her share of psychological and physical torture during her detention in the regime's prisons. She was arrested twice, and her second detention lasted four months where she experienced the worst kinds of torture.

Layal, current director of the local council women's bureau of the city of Aleppo, which is affiliated with the Syrian interim government, told Al-Monitor, “I was a high school teacher, and I live in rebel-controlled areas. I was arrested on May 28, 2013, by security agents near the civil court, located in regime-controlled areas. They took me to the political security branch, where I spent three days, and they accused me of participating in demonstrations against the regime. The first time I was arrested, I denied all of the accusations made against me, and I was released three days later. Once released, I was surprised that my monthly salary was withheld by the Directorate of Education, so I started a special process to get my monthly salary back. On Dec. 31, 2013, I visited the Directorate of Education to ask for identification papers and get my monthly salary back. While I was there, members of the political security branch asked me to accompany them to the branch to sign some papers. When we got to the branch, I waited for three hours near the office of the university, and a certain Abu Yazen summoned me and asked me to show my ID. He told me I was under arrest again.”

Layal continued, “I was detained for four months during which I suffered from the worst kinds of psychological and physical torture. Despite my diabetes and high blood pressure, they denied me any medical consultation while in detention. I was accused of protesting against the regime, of being involved in terrorism and of harboring militants in my house. I denied all the charges except those related to protesting against the regime. My statements had to be consistent with the statements I made in the first investigation so as to avoid being kept in jail for several years, or even being killed. On March 1, 2014, and following great suffering, I was finally released but only to find out that all of my acquaintances were rejecting me. To them, I was no longer the woman they knew. Everyone kept their distance from me and avoided seeing me. I spent a year by myself with only my siblings by my side. They were the only ones to understand the reason behind my arrest. They were the only ones who knew full well that what happened was out of my control.”

In light of the reality that women face after their release, the Syrian Institute for Justice held a symposium April 17 in Aleppo titled “The social reality that awaits detained women following their release.” The symposium dealt with society's outlook on women released from prison and showed how they are perceived as “criminals” rather than “victims.”

Zakaria Amino, a lawyer and member of the Syrian Institute for Justice, told Al-Monitor, “Once women are released from prisons, they face a very unjust treatment by society. Therefore, it was necessary to conduct awareness campaigns in conjunction with the local council of Aleppo in order to raise awareness, reintegrate women in society and adopt a humanitarian outlook worthy of women who have a role in society.”

Amino added, “We have agreed with the local council of Aleppo and the neighborhood councils on the need to create psychological support centers for detained women all the while providing them with job opportunities so that they can be active in the community. These centers should honor the detained women, reward them both financially and morally, provide them with suitable houses and fight any kind of sex discrimination in this regard. The conclusions reached by the seminar will be raised to the institute's administration in order for it to take the necessary action and establish centers in locations to be determined at a later stage.”

People in Syria have two different outlooks on detained women. Some believe these women are victims of a brutal regime, while others, governed by customs and traditions, find them guilty despite all the suffering and pressures they experience. This occurs even while men who are released from prison are viewed as heroes who should be rewarded.

Abu al-Mutasim, a resident of al-Mowasalat neighborhood, told Al-Monitor, “We should treat the released women as innocent victims despite everything they may have experienced inside the prisons. Our religion teaches us that if women are forced to do something, then they are not guilty. However, some people are governed by blind customs and traditions. This requires a lot of awareness campaigns, especially considering that any woman we know could be arrested at any time.”

For some Syrians, the concept of honor and dignity has led detained women to live between two fires. The first is the detention fire, which even the mightiest of men cannot bear given the brutality of the Syrian regime’s security members. The second is the fire of injustice and moral defeat that the released women experience in a community that judges them. Such a reality can be tougher than prison itself, especially when relatives and friends are involved.