Syrian businessmen continue to partner with Turks in Turkish enterprises, even though such Turkish sponsorship is no longer required by law. 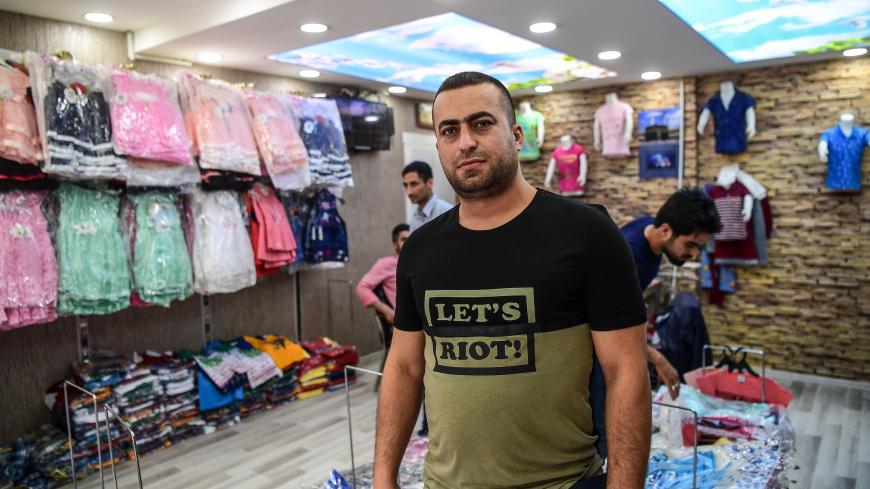 Millions of Syrians who took refuge in Turkey have not been able to adopt the Turkish way of life, mainly because they prefer to live in isolated neighborhoods, but Syrian businessmen have largely integrated into Turkish society. Even though it is not required by law, Syrian businessmen also prefer to be business partners with Turks.

According to data Al-Monitor obtained from the Union of Chambers and Commodity Exchanges in Turkey, Turks have entered into partnerships with Syrians in 7,972 companies from March 2010 to August 2018. The data show that Syrian businessmen began shifting their investments to Turkey after March 2010, one year before the onset of the civil war.

From 2010-2012, foreigners setting up a business in Turkey were legally required to have Turkish partners. In July 2012, Turkey abolished that requirement.

Why, then, do Syrian businessmen continue to enter into partnerships with Turks?

Former Minister of State Masum Turker told Al-Monitor that, in general, small- and medium-sized Syrian companies still operate according to the old legislation. “They think they are still required to set up partnerships with Turks, although that was annulled in 2012," he said. "It appears that their accountants don’t feel the need to tell them about it.”

According to Masum, Syrians prefer to enter into partnerships with Turks for several reasons. “Of course they need to adapt to the local markets," he said. "Syrians want to benefit from the experience of Turks in their own markets. Some Syrian businessmen produce in Turkey. Turkish businessmen are attracted by markets they already have in Syria, Qatar and Yemen. Both sides benefit. For example, many such joint companies manufacture textile goods for export.”

Shares in joint companies are determined by the amount of money invested. In this, Syrians lead the way. In the companies set up from January 2018 to August 2018, 64.7% of investments were by Syrian businessmen, making them the "dominant bosses."

The over 3.5 million Syrian refugees in Turkey constitute a major market for Syrian businessmen, as they are the major buyers of smaller businesses like markets, bakeries and restaurants.

Omer Fethi Gurer, an opposition Republican People's Party deputy, said, “Go to Urfa and Kilis and see how Syrians dominate the markets alone. In many towns, bakeries and restaurants are owned by Syrians.”

Gurer said Syrians now outnumber Turks in Kilis and, given their rapid population increase, they will soon be the majority in many towns.

Gurer said Italians have apple orchards in Nigde province but that, in local registers, these are listed as owned by locals. Similarly, Gurer said, Syrians own many businesses that are not registered in their names.

Asked why such deception, Gurer said, “If they want to buy those businesses on their own, Turks may refuse to sell their bakeries and markets directly to single Syrian buyers. That is why many businesses change hands secretly or through partnerships.”

No matter the method, the share and domination of Syrians in the Turkish market is increasing. According to official figures from the Union of Chambers and Commodity Exchanges in Turkey, there are 42,217 joint companies in Turkey. The 7,972 companies set up with Syrians now comprise 19% of the entire market.

The Economic Policy Research Foundation of Turkey said 1,085 Syrian partnership companies were established in the first eight months of 2018, mostly in Istanbul, followed by the southern provinces of Mersin and Hatay. Regionally, Syrian investments intensified in Marmara.

It is, however, expected that Syrians will contribute to this most vital problem of Turkey since Turks don't prioritize joint educational projects for the education of Syrians.