Commentary: Have Palestinians given up on resistance?

According to a recent poll, Palestinian support for peace negotiations has increased at the expense of the resistance, which raises questions on the reason behind this. 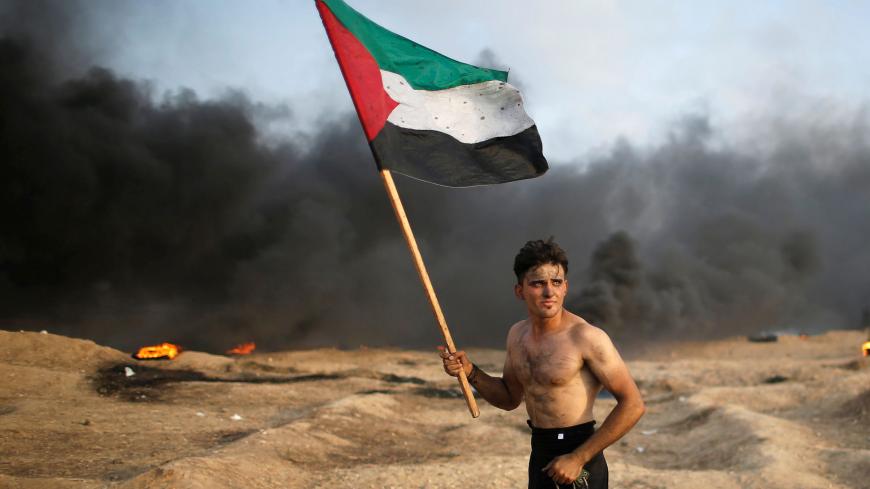 A demonstrator holds a Palestinian flag during a protest calling for lifting the Israeli blockade on Gaza and demanding the right to return to their homeland, at the Israel-Gaza border fence, Gaza Strip, Oct. 19, 2018. - REUTERS/Mohammed Salem

Deadlock has been plaguing political life of the Palestinians after two major developments took place four years ago. In April 2014, Israel announced freezing negotiations with the Palestinians on the heels of the Fatah-Hamas reconciliation agreement, which was followed by the outbreak of the third Israeli war on the Gaza Strip in July-August of that year.

The Palestinians have been suffering under the same situation ever since. There are no negotiations with Israel, no implementation of the internal reconciliation agreement and the security tension in Gaza remains the same. The situation worsened when US President Donald Trump announced in December 2017 his recognition of Jerusalem as the capital of Israel and moved the US Embassy there in May.

Consequently, the Palestinians have expressed striking positions, reflecting unconventional convictions in terms of negotiations and resistance.

A poll by the Jerusalem Media and Communication Center (JMCC) published Oct. 16 revealed differences among the Palestinians on the best means to achieve their goals to end the Israeli occupation and establish a Palestinian state. The poll showed that 46.9% now believe peace negotiations are the best solution. In January, 25.2% believed this, 37.6% in February 2017 and 33.6% in March 2015.

In addition, 31% of Palestinians said that rockets fired from Gaza toward Israeli targets benefit the national interest, while 61.8% had believed that in October 2014 and 74% in December 2012.

Ghassan Khatib, JMCC director and former minister of planning in Ramallah, told Al-Monitor, “Overall, Palestinians have fluctuating and unstable opinions, but their support for the resistance in the last 15 to 20 years is declining, suddenly rising on some occasions like the Gaza wars between 2008 and 2014, when they see missiles being launched from Gaza to Israel. The situation then returns to normal, but in the long run, [support for the resistance] is declining.”

The poll showed that 42.1% of the Palestinians in the West Bank support the negotiation path with Israel, while 54% of the population in the Gaza Strip backs such talks.

It is no secret that the Palestinians, no matter where they live, are frustrated now more than ever. In the West Bank, the Palestinian Authority is absent on the ground in exchange for the increased powers of the Israeli army and the Israeli Civil Administration. Negotiations since 1993 have proved that no state has been established and no occupation has been withdrawn.

In the Gaza Strip, the situation never changes. The Israeli siege grows fiercer by the day and there is no prospect of alleviating or lifting it. Talk of an imminent Israeli war against Gaza is raising concerns among the Palestinians who fear its terrible consequences as they have not yet recovered from the previous three devastating wars.

Amin Maqboul, member of Fatah’s Central Committee, told Al-Monitor, “These results reflect the decline in Arab and international attention to the Palestinian cause. Palestinians are leaning toward negotiations rather than the armed struggle since no countries support the latter. Palestinians have become frustrated with the future of the resistance. However, in the West Bank — unlike Gaza — support for the resistance is rising with the increase of the occupation’s level of repression there.”

Palestinians in the Fatah-controlled West Bank are not supporting such negotiations with Israel as much as they used to. Meanwhile, Palestinians in the Gaza Strip, where Hamas rules and has built an armed military arsenal, are supporting resistance less, according to the poll. This raises questions about the success or failure of the two movements in promoting their political program on the ground.

Hamas spokesman Hazem Qassem told Al-Monitor, “Other polls have shown that the majority supports resistance in all its forms and rejects negotiations, since they failed to yield positive results for our people. Hamas adopts general strategies based on national constants, and does not formulate its policy in a way that detracts from these rights, although it can use different tools and means at every stage. Hamas has expressed these approaches with its political document in May 2017.”

The results of this poll shows the Palestinian people’s positions that vary depending on political developments. Meanwhile, other polls and statistics show different results.

“Gaza supporting negotiations is quite logical given the Israeli siege imposed on Palestinians there. Meanwhile, there are concerns about the results of polls being manipulated to serve the interest of the funding parties. I will not mention any names, but I know a lot of Palestinian researchers who fill out surveys in the comfort of their own homes, while others ask their friends to fill them out for them, which makes me doubt all results,” Nashaat al-Aktash, professor of media and public opinion at Birzeit University, told Al-Monitor.

“The political options for Fatah and Hamas have not produced results on the ground — be it through negotiations or resistance — and I have no idea what other option might work with Israel,” Jihad Abdel Rahman, owner of a Ramallah money exchange store, told Al-Monitor.

Speaking to Al-Monitor, Wafa Salim, a student at Al-Azhar University in Gaza, said, “I do not see the US deal of the century leading to success. Washington is biased toward Israel and given the Palestinian division, Palestinians do no have a unified vision. I am inclined to support holding an international conference that will impose an acceptable solution for both Palestinians and Israelis.”

Despite the importance of the results of this poll, which seem striking and impressive, one cannot blindly believe them because all results are relative and prone to mistakes. However, it may still be able to urge that the Palestinian political forces reconsider their policies and positions, because they usually pay little attention to the Palestinian public opinion and rather adhere to their organizational agendas in isolation from popular tendencies.