Fatah-affiliated militias are operating in Gaza to Palestinian Authority President Mahmoud Abbas’ displeasure and with no restrictions from Hamas, which says it welcomes every contribution to an armed resistance against Israel. 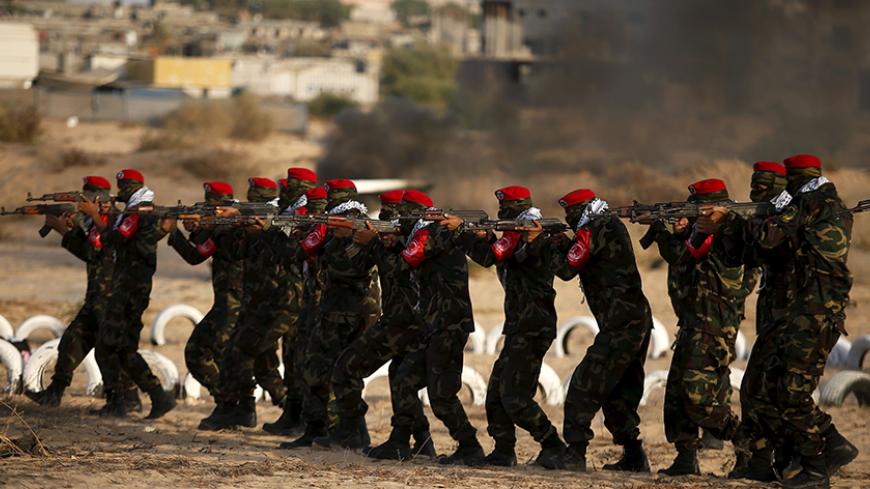 GAZA CITY, Gaza Strip — Despite the ban imposed by Hamas on Fatah’s activities in the Gaza Strip since it took control in June 2007, and despite the intensification of political differences between the two parties, the military relationship on the ground looks different: Fatah’s military wing, Al-Aqsa Martyrs Brigades, is conducting unrestricted military training in Gaza.

Questions arise regarding the nature of the relationship between Al-Aqsa Martyrs Brigades and Hamas and about the brigades’ adoption of armed resistance, although Fatah leader and Palestinian President Mahmoud Abbas rejects the armed struggle against Israel.

Al-Aqsa Martyrs Brigades was founded under late President Yasser Arafat, on the eve of the second intifada, Sept. 28, 2000, with the goal of carrying out military operations against Israeli targets.

However, in July 2007, Abbas announced he was dissolving the brigades. This decision led to wide defections within the brigades' ranks, while military cells affiliated with them started forming in Gaza under different names, such as the “Abdul Qader al-Husseini Brigades.”

On Sept. 22, the Abdul Qader al-Husseini Brigades celebrated the graduation of dozens of fighters from military training in the city of Khan Yunis in southern Gaza. The fighters performed a military exercise simulating the invasion of Israeli sites using various weapons.

Abu al-Walid, a spokesman for Abdul Qader al-Husseini Brigades, said that the body, which was formed on April 8, 2012, is a wing of Fatah’s Al-Aqsa Martyrs Brigades, whose goal is to liberate all of Palestine from the Mediterranean Sea in the west to the Jordan River in the east.

In an interview with Al-Monitor, Walid noted that these brigades’ commanders are founders of Al-Aqsa Martyrs Brigades. “The [Abdul Qader al-Husseini] brigades have 700 fighters in Gaza, in addition to thousands of supporters who do not partake in the brigades’ military activities,” he said.

Walid pointed out that Hamas does not hinder their training and military work in Gaza, and that their relationship with the movement is based on a single goal: the liberation of Palestine. However, he said that coordination “is still superficial,” adding, “We are operating in Gaza without anyone’s permission.”

Hamas leader Yahya Moussa stressed that his movement provides support for any faction or party that wants to fight Israel. “Hamas embraces the resistance and cannot prevent anyone from resisting the occupation, regardless of their political affiliation. Anyone who wants to fight Israel is welcome,” he told Al-Monitor.

Moussa explained that Fatah’s military wings in Gaza have not been affected by the deepening political differences between the two movements. He said, “It is the factions’ right to arm and train themselves and have military sites, but all this is done under the auspices of the government in Gaza.”

On the possibility of these brigades using their weapons against Hamas in the future, Moussa said, “Al-Aqsa Martyrs Brigades are part of the National Liberation Army, which we are preparing for the Liberation of Palestine. I do not think it is possible for their weapons and training to backfire on Hamas, or to be used to undermine security in Gaza, because we are confident that these weapons could only be pointed at the Israeli occupation.”

Talal Okal, a political science professor at Al-Azhar University in Gaza, said that the Fatah-affiliated militias operating in Gaza “are derived from Al-Aqsa Brigades, which Abbas dissolved and are operating against his will, as he rejects armed resistance. But they are still trying to remain under Fatah’s umbrella.”

Okal told Al-Monitor, “These brigades are not under a unified central leadership, and they have limited capabilities. They also reject the corrupt approach adopted by the Palestinian Authority, and they are trying to impose their presence during military operations against Israeli targets, and to prove that Fatah did not leave the armed struggle.”

Abbas does not pass up an occasion to stress his absolute rejection of armed resistance against Israel and his support for peaceful and diplomatic resistance. He noted during a visit to Tunisia on May 15, “Today, we are pursuing a diplomatic policy and not armed struggle, as it does not help and results in major counterproductive repercussions that we do not want, nor accept.”

A source from the Fatah leadership in Gaza said that these brigades are operating in Gaza under Fatah’s indirect approval and management and they are receiving personal funding from inside and outside Palestine, apart from the movement’s general budget and without Abbas’ knowledge.

The source told Al-Monitor on condition of anonymity, “Fatah never eliminated the option of armed struggle; it froze it during the past years when the tendency was toward negotiations with Israel. However, as these negotiations failed, the movement is now trying to reactivate the armed resistance among its military ranks.”

However, Okal ruled out the possibility that Fatah is serious about reactivating the armed resistance. “These talks are exaggerated and Fatah’s open re-adoption of the armed resistance option will not happen anytime soon. This requires a revolution in its internal policy and as long as President Abbas is head of the movement, I believe it is difficult to say that Fatah is leaning toward the military option,” he said.

“Fatah’s bylaws legalize our armed resistance, and President Abbas cannot snatch this option out of our hands,” Walid said. He explained that his brigades were the first to respond to the settlers’ crime of killing and burning the teenager Mohammed Abu Khdeir in Jerusalem on July 2, 2014, saying, “We were the first to launch a missile at Israel in response to this crime that sparked the recent war on Gaza. The first leaders to be assassinated during the war on July 6, 2014, were leaders of the Abdul Qader al-Husseini Brigades: the military commander of the central province Mazen al-Jarba and the commander of the rocket unit in the province, Marwan Eslim.”

It seems clear that Hamas in Gaza supports anyone who believes in armed resistance and gives them a space to operate even if they were political enemies. Meanwhile, there is a growing belief among Fatah members of the necessity to reactivate the armed struggle despite Abbas’ rejection.