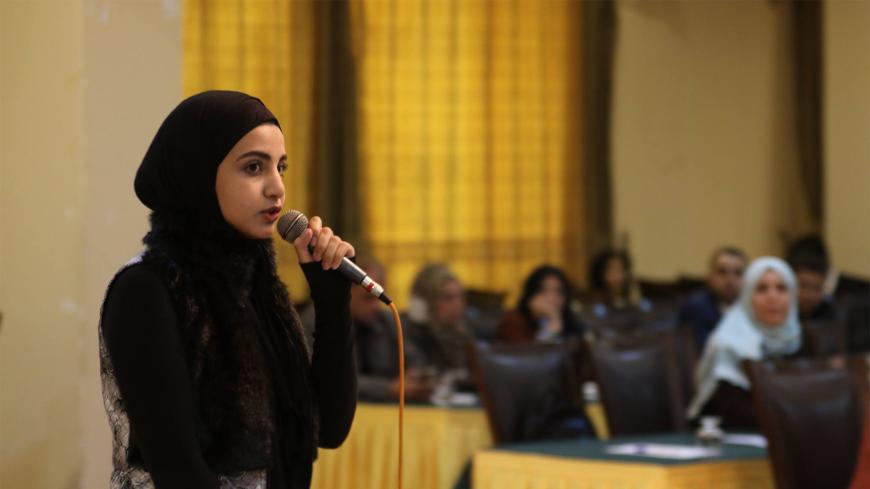 The debates, where each youth team presents opposing viewpoints on a specific political, social or economic hypothesis suggested by the organizing party, are judged by a panel of jurists composed of civil servants, lawyers, writers or academics. The jury selects the winning team based on who presented the stronger and more convincing argument.

The Filastiniyat Foundation, a local media association aimed at promoting the active participation of Palestinian women and youth on all decision-making levels, encourages debates in Palestinian society through the annual Debate Tournament for Gaza Universities.

Wafa Abdel Rahman, the foundation’s director, told Al-Monitor that the foundation has been organizing the annual tournament between five Palestinian universities in Gaza for the past five years. It is funded by Socialist International, a global organization of social democratic, socialist and labor parties. Socialist International currently brings together 140 political parties and organizations from all over the world.

Prior to the debate, 30 male and female university students receive training to develop their debating skills, particularly on supporting their point of view with facts.

On Dec. 24, Filastiniyat concluded the 2017 Debate Tournament, where teams debated the statement, "This council believes the Palestinian division has extended the life of the Israeli occupation.” The team representing the Islamic University of Gaza, which supported this hypothesis, won the debate against the team representing the University College of Applied Sciences in Gaza, which supported the view that the failure of the Palestinian Authority (PA) and Israel in reaching a settlement prolonged the occupation, not the division.

Abdel Rahman explained that debate is still a novel idea in Palestinian society, where partisan fanaticism prevails among numerous Palestinian political parties and their supporters. The youth often adopt the ideas of the party they are affiliated with without questioning or discussing them, which prevents them from considering the merits of other points of view or even tolerating them.

She noted that the debates also aim at addressing several negative patterns of behaviors among the Palestinians, such as blindly believing things without verifying them, the lack of respect of alternative opinions and interrupting the other party repeatedly without giving them an opportunity to express their point of view.

“These debates give young people the opportunity to explore, investigate, research and examine information about the issue under discussion; build a logical and scientific discourse based on evidence and persuasion; and respect another point of view,” Abdel Rahman said.

Journalist Mohammed El Najjar, 30, who has participated in three youth debates as a member of the youth groups since 2016, told Al-Monitor that this new experience has helped him learn many principles he could employ during a dialogue, such as listening to others and forming convincing arguments in defense of a specific issue.

“This experience has taught me that my point of view can in fact be wrong if I have not done my research and listened to others. Debates can help eliminate intolerance. It has helped me gain self-confidence and form strong, convincing arguments,” Najjar said.

Nashaat al-Aktash, a professor of journalism at Birzeit University in Ramallah, the West Bank, told Al-Monitor that encouraging the youth debates is very important because it significantly contributes to promoting positive dialogue in a society that is still suffering from the consequences of intellectual intolerance, most notably due to the internal conflict between the two largest Palestinian parties, Hamas and Fatah, which resulted in the Palestinian division that has persisted since 2007.

He explained that the tribal system that governs Palestinian society “strengthens the idea of intolerance since the entire tribe [blindly] adopts the opinion of the tribal chief, but with technological development and social media, young people are given ample space to talk and discuss with others.”

Aktash added, “In addition to this newfound openness, the youth debates have created a new environment for young people to share information and opinions and promote dialogue.”

The Palestinian Institute for Communication and Development in Gaza, an independent institution that held youth debates in 2016 and 2017, has used debate as a tool for transparency. In their debates, students, journalists and social media activists make up one team and local officials another. Then the two teams hold a debate on issues for which the local officials are responsible and accountable.

The institute’s director, Fathi Sabbah, told Al-Monitor, “We have been able to turn debates into a tool that the public can use to hold local municipalities accountable at a time when the Palestinian Legislative Council fails to play an effective role.”

He said that four debates were organized in 2017 that involved 30 students, journalists and local officials, pointing out that these debates are funded by the official PA-affiliated Palestinian Central Elections Commission and the civil society organization Transparency Palestine.

Sabbah noted that his institute is in the process of developing a new method for these debates by making youth teams face official teams, made up of ministers and deputy ministers, and addressing issues related to their everyday lives, services and many topics that concern citizens such as the electricity crisis.

He added that despite the two years of work his institute has put into promoting a culture of dialogue and acceptance, they still have a long way to go. “We need to work even more in the coming years, so we can make progress and change this culture,” he concluded.