A new report by the Sharek Youth Forum highlights the challenges faced by Palestinian youth, including high unemployment, obesity and frustration in the political process, writes Hazem Balousha. 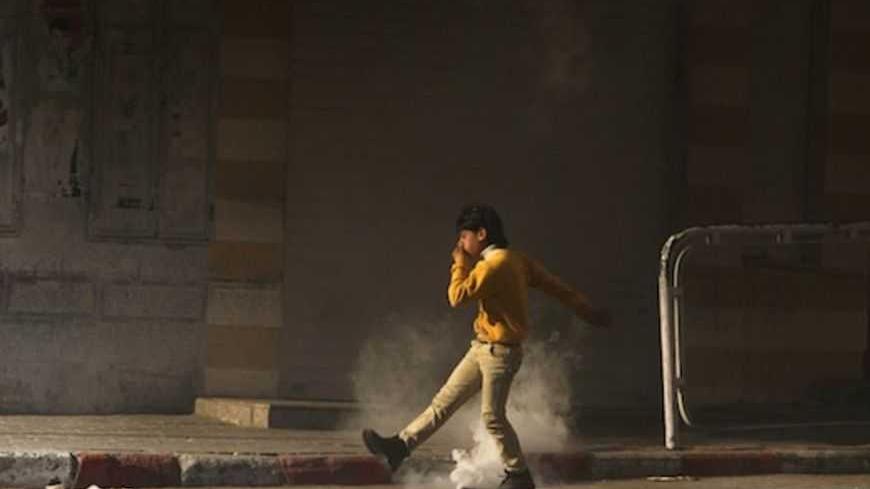 A Palestinian youth tries to kick a tear gas canister back to Israeli troops during clashes with stone-throwers that broke out after a rally in the West Bank city of Hebron to show solidarity with prisoners on hunger strike in Israeli jails, Feb. 18, 2013. - REUTERS/Ammar Awad

Palestinian youth constitute about one-third of the Palestinian population in the West Bank, the Gaza Strip and Jerusalem. They are the foundation for developing Palestinian society amid rising unemployment, growing debt and eroding trust in Palestinian political parties.

A report on the state of Palestinian youth in 2013 by the Sharek Youth Forum, the largest Palestinian civil youth institution, reports that of the 40% of Palestinians who live in poverty, a quarter are young people. Roughly 44% of young people are unemployed, even though just over half of them hold university degrees.

The report blames the high unemployment on the weak Palestinian economy in the West Bank and the Gaza Strip, disparities between male and female employment rates, a lack of productive opportunities in the Palestinian market, the gap between education and the labor market and the absence of a comprehensive Palestinian policy on youth employment.

The report, titled “The Future is Knocking at the Door,” summarizes the opinions of young Palestinians about their economic situation through research in the West Bank and the Gaza Strip.

Most official Palestinian statistics, as well as those of local and international NGOs, show that in recent years, the Gaza Strip's poverty rate has been higher than in the West Bank. This is the result of the siege around Gaza, the high population density, the scarcity of resources and few production and investment opportunities.

Many government and NGO reports have made recommendations on how to reduce poverty and unemployment, especially among marginalized groups like women, children and young people. But those recommendations produced few results when implemented. The occupation, an excessive reliance on external funding and the Palestinian Authority’s economic policies have hampered the development of a self-reliant economy.

"The rising unemployment among university graduates has caused them frustration," the report argues. "Because of the limited labor market and the small business sizes, some employers ask their employees to work in more than one area, which are not in line with their specialties or studies. Some young people have received part-time or temporary employment, which barely covers their needs."

The report points out that unemployment and poverty leads young people to frustration and despair, harms their dignity and creates social and political problems. Those include pushing young people to emigrate in search of a livelihood and self-fulfillment, and higher rates of violence, crime and drug abuse.

"The two Palestinian governments in the West Bank and Gaza Strip have traditionally blamed their chronically weak economies on the lack of aid and the siege imposed on Gaza, without taking practical measures to end their division and break their economic constraints, as required by the Paris Protocol," the report continues.

Approximately 30% of Palestinians in the territories are between the ages of 15 and 29. There are just over 104 young men per 100 young women. The total Palestinian population in the occupied territories in mid-2012 was estimated at roughly 4.3 million.

The report also addresses the health of Palestinian youth. "Obesity, smoking and inactivity are the main health risks for young people," it says. "A number of studies have shown that 25% of adolescents and 30% of girls are obese or overweight. [A United Nations Relief and Works Agency for Palestine Refugees in the Near East] study said that 70% of females of reproductive age and more than half of women under 30 are overweight."

The report says that tobacco use in all its forms is another risk factor for young people. Their rate of smoking ranges from 17% to 25%, with some studies putting the figure even higher, at 32%.

The report addresses the lack of data and statistics about sexually transmitted diseases among young people. The report describes reproductive health services for young people as "timid." Awareness programs are inadequate or disorganized. Development policies do not seriously address young people’s reproductive rights and mostly avoid the topic because the culture, customs and traditions consider it taboo.

The Sharek poll shows a breakdown in social relations among young people, where only 54%, mostly males, have strong and broad social relationships. The report said that 11% lack social relationships; of those, 36% blame that on not having enough time, 26% blame it on their level of education, which limits their chances of social interactions, and 20% say they do not trust others.

Most Palestinian youth say that their society are religious in a general sense — they have faith, their respect religions, reject religious intolerance and have a centrist conception of religion. Most young people, especially in the Gaza Strip, said that the prevalence of religious militancy is a temporary phenomenon caused by frustration, the spread of poverty, unemployment and social problems.

Roughly 300,000 persons are disabled, representing 7% of the total population. The illiteracy rate among the disabled is roughly 50%. Only 3% of public sector employees are disabled, despite a law requiring that that number be at least 5%.

With declining youth activities in some political and community organizations, young people have sought other channels to express their political opinions. Social networking is one of those channels. Young people are not very active in political parties but their activism is high as independents. The latter kind has been either opposed or met with mixed reactions by political forces, many of which have not supported activism by independents.

Roughly 60% of young people say that establishing a state based on the Palestinian territories occupied in 1967 is not possible because of complicated internal and foreign politics.

Hazem Balousha is a Palestinian journalist based in Gaza City. He has worked as news producer for BBC World Service.