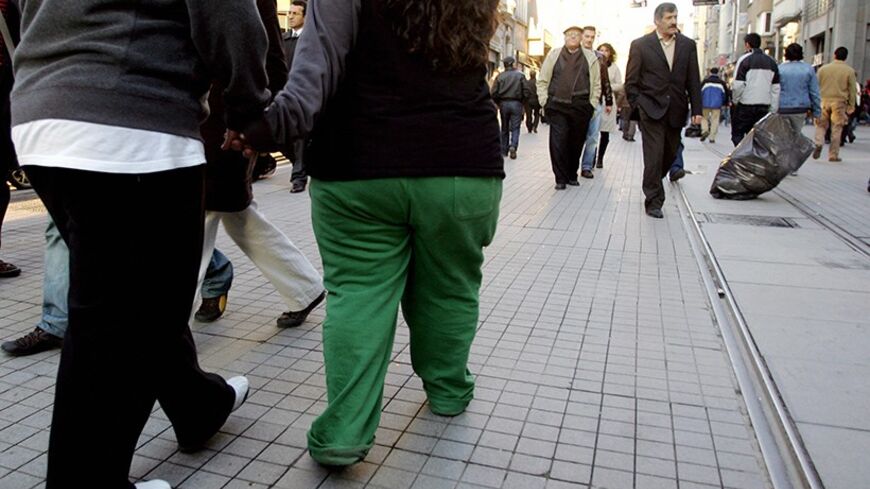 “A man without a belly is like a house without balcony” is a well-known Turkish proverb in the same vein as “a little meat over the bones hides thousands of mistakes.” Both of these proverbs (the first for men, the latter mostly used for women) praise carrying a bit of extra weight. Only a few decades ago, excess weight signified health and better economic status than being “skinny” in Turkey. Considering Turkish cuisine as a part of the culinary tradition of the Mediterranean diet (recommended for a healthy lifestyle), it is perplexing to view the country’s increasing obesity rates. On April 22, it made the headlines that in the last 12 years obesity has increased 44% in Turkey.

This is a significant increase when you consider the Turkish Statistics Institute’s (TUIK) 2013 findings: The No. 1 killer in Turkey is heart and vascular disease. Approximately 40% of all deaths are caused by heart and vascular diseases. Heart disease hits women harder by about 45%. Further analysis of TUIK’s data on obesity shows that 20% of women and about 14% of men are categorized as obese; when we add the overweight category, the numbers approximately double for both genders.

Three intriguing facts emerge: First, although women have a higher probability of being obese than men in Turkey, male obesity rates have soared. Between 1998 and 2010 the obesity rate for men increased 107%.

Second, TUIK’s data indicates that obesity rates for both genders tend to be a little higher in rural areas than urban. Finally, child obesity rates are increasing as well. It should be noted that as minors, more males tend to be overweight than females; as their age increases, so does the percentage of overweight kids in the population. About 21% of children are categorized as overweight or obese at age 10, according to the government’s research.

A cardiologist who runs a private, upscale clinic in Istanbul, after reassurances about confidentiality, told Al-Monitor: “First and foremost, our patients are extremely conscious about the fact that they are seeking help about their condition. Some of them even hide this fact from their immediate family members, because they feel deep shame and failure. We observe over the last decade that the number of men seeking help have surpassed women. Increasingly, we see men who are emotional eaters.” He also highlighted that most of these men prefer male nurses, so they have been hiring more male nurses. Turks are now spending $5 billion annually to lose weight. A lucrative industry for weight-loss products, dietitians and even online support groups has emerged.

The reasons for weight gain in Turkey are similar to those for other countries. Fewer opportunities to be physically active and the increased consumption of processed foods are main causes. Many of the traditional high-density foods, such as baklava and other pastries, which used to be “festive, once-in-a-while treats” have become widely available for everyday consumption. Turkish hospitality culture also makes it impossible to turn down food. “You must clean your plate to show your appreciation” is a sentence every guest hears at least once on family outings in Turkey.

In addition, traditional everyday foods such as simit — the Turkish bagel, which used to be just the dough and sometimes sesame seeds — now come with different fillings of meat, cheese and other options. These additions of taste pack calories in a subtle but intense way.

As in other industrialized countries, in Turkey weight gain is no longer a sign of wealth; to the contrary, it signifies poor health care and lower socioeconomic standing. Along with this change, the flattering proverbs about being a little chubby and cuddly have lost their popularity. They are replaced with fat jokes and negative images in the media. From children’s cartoons to popular television shows, we observe that overweight people appear less frequently and are given exclusively supporting roles. Interestingly, the more methods we acquire to battle weight issues, the deeper weight stigma develops in society.

GIMDES, an agency to certify halal [acceptable by Islam] products in Turkey has a poignant article on its webpage arguing that obesity is a “present to humanity from the West.” It provides several important steps to avoid obesity, such as, “Consume halal and tayyib [those foods that do not need to be certified halal but acceptable to consume for Muslims].”

In Turkey, there is no legislation against weight or size discrimination. To see fat policemen in the streets is not surprising. The military tolerates a bit overweight but not obesity.

Many people quietly suffer. They often take the back seat in social and professional life. An accomplished designer working for a prominent advertisement company told Al-Monitor, “I was gently reminded over lunch to order a salad and watch my waistline if I want to be assigned the next big project.”

Bigger sizes are a fact more acceptable for men than women in the public space in Turkey. What is most intriguing in Turkish culture is that offensive statements about one’s weight are frequently viewed and defended as being “for your own good” and “to motivate you to lose weight.” The neighborhood pressure, as it is frequently called, is rarely perceived as discrimination in this culture. So dietitians and psychologists debate whether this kind of pressure is helpful or counterproductive for weight loss. Those who argue it is counterproductive raise a red flag about patients resorting to self-medication for weight loss and refraining from socialization, which deepens their depression. Those who argue neighborhood pressure is effective for weight loss suggest that neighborhood pressure means a good circle of friends is keeping people in check: “It is a good friend’s duty to say you need to lose weight, it shows that we care.” The jury is out on whether or under what conditions neighborhood pressure is acceptable for weight loss, but as the number of overweight and obese individuals increase in the society, so does the stigma associated with excess weight.

The Turkish government has realized the danger — as excess weight also means higher health care bills — and has initiated several programs. The government has announced plans to pay for weight loss surgery for eligible patients. The Turkish Health Ministry has carried out a successful anti-smoking campaign, and it is known that Turkish Prime Minister Recep Tayyip Erdogan has spoken out against smoking. His sensitivity on smoking, along with enforcement legislation, has helped diminish both smoking rates and harmful effects of second-hand smoking. Maybe some creativity is needed to encourage more Turks to shed the excess weight. For example, could the Turkish government — following the footsteps of Dubai — offer a gram of gold [the equivalent of $41.68] for each kilogram (2.2 pounds) lost?