Obesity in the Gaza Strip has increased as of late, with many Palestinians in Gaza seeking to shed pounds with the help of weight-loss centers. 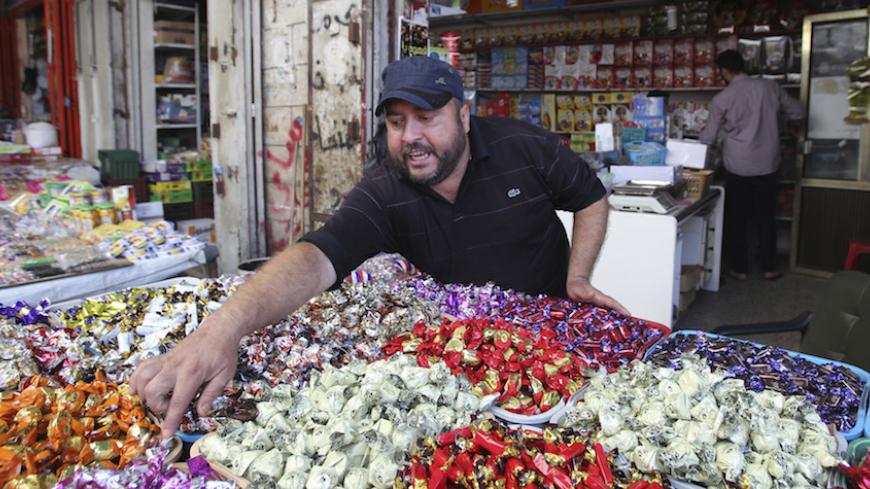 GAZA CITY, Gaza Strip — Mona Hussein’s diabetes and hypertension, acquired during a pregnancy two years ago, have pushed her to see a dietitian. Her social life has deteriorated due to her obesity, as she now weighs 95 kilograms (209 pounds).

Hussein, 30, told Al-Monitor, “My desire to wear a smaller size has increased my excitement. I want to participate in all social occasions without being ashamed [of my body]. Not to mention the awkward situations I found myself in and the criticism against my figure that worsened due to my excessive weight.”

Though Mona was concerned about the possible repercussions of a diet on her health, she found a doctor who has helped her adopt a diet to help her lose weight in a healthy fashion. She believes she has made the right choice.

Samah Khaled, 26, from Gaza City, believes that her excess weight has stood in the way of her finding a husband, so five months ago she consulted a dietitian and has now lost over 40 kilograms (88 pounds).

“In an attempt to change my social life and enter a new phase, especially since most of my friends are now married, I decided to resort to a dietitian to lose weight and have a better figure. I was more convinced by the idea of diets after meeting women who lost a large part of their body weight,” she explained.

Samah said that her psychological state has improved since her weight loss, as have her chances at finding a husband.

Obesity has become prevalent in the Gaza Strip, as confirmed by the increasing demand on dietitians. Ata Qaisi, health care consultant and owner of Gaza City's Diet Center, said obesity can have negative repercussions on a person's life, making him or her more vulnerable to hypertension, diabetes and joint pain. Obese women are also more susceptible to pregnancy complications and miscarriages, according to Qaisi.

Qaisi told Al-Monitor that there is a large demand in Gaza for weight-loss programs. “The comfort is in the improvement of the figure and this is what we seek through our programs, which are supposed to be followed through diets and not only by relying on weight loss. When the person finds that the weight has been reduced and the shape has been improved, his or her entire life completely changes. This is how people find comfort in their hearts and minds,” he said.

Qaisi said that many Palestinians have consulted weight-loss centers, either in a bid to treat obesity or just to shed a few pounds ahead of a social event. Only five weight-loss centers can be found in the Gaza Strip, according to Qaisi. Statistics on the number of nutritionists in Gaza are unavailable.

Some people consume herbal supplements or take pills to lose weight in a short period of time, said Qaisi, yet this often results in complications and does not help individuals lose weight. Qaisi estimated that women represent 95% of weight-loss program clients.

In the Gaza Strip, a high proportion of people suffer from obesity. “Only 18% to 25% of the Strip’s residents have a normal weight," he said. "The rest are suffering from obesity because of the nature of our life pattern, in addition to the unbalanced social lifestyle, bad eating habits, food traditions and dessert consumption.”

He added, “Such a large proportion is the result of common diseases such as diabetes, stress, cancer and rheumatism. If, for example, the proportion of patients with high blood pressure is 30% of the population, know that 97% of them are due to obesity and the rest are due to accidental causes.”

Suhail al-Qishawi, an endocrinology and diabetes consultant, told Al-Monitor that obesity puts one at risk for Type 2 diabetes, as do other factors such as lack of exercise, age and genetics.

“Obesity is now classified as a disease that results in high blood pressure, because it is often associated with the pancreas producing less insulin due to the fat on the organ. This causes diabetes among obese persons. Patients with Type 2 diabetes in the Gaza Strip represent more than 95% of patients with diabetes in general, which means that around 95% of diabetes patients got it as a result of obesity,” he said.

Despite the deteriorating economic situation in the Gaza Strip, residents’ awareness of the danger of obesity has pushed many to seek out the services of weight-loss centers to help them overcome the disease.