Women in Gaza turn to bodybuilding

Despite the fact that bodybuilding is frowned upon in Palestinian society for women, some girls and women in the Gaza Strip have become interested in this sport. 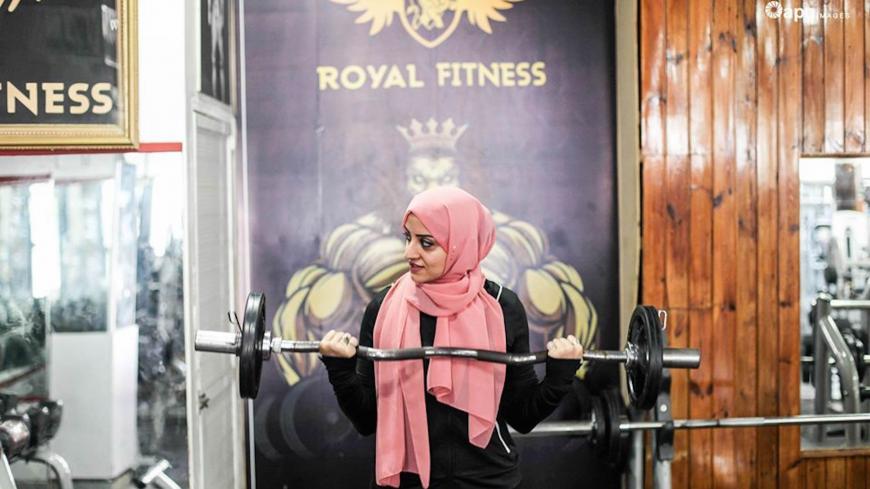 Despite the fact that bodybuilding is frowned upon in Palestinian society for women, some girls and women in the Gaza Strip have taken up the sport recently in an effort to get fit and build broad shoulders and strong muscles, reflecting the strength of their personalities. These women have crossed all kinds of red lines as they chose to practice a sport that society considers a male-only affair.

Many women in Gaza of all ages are doing whatever they can to be beautiful and elegant, and this is reaching in some cases the point of obsession. Some have now joined bodybuilding clubs in the hope that these clubs will become less male-dominated and admit as members the women captivated by the sport.

Shireene el-Aila, 33, was the first female bodybuilding trainer in the Gaza Strip. She told Al-Monitor that she is “strong-willed.” "My choice to practice this kind of sport was not an easy decision because Palestinians frown upon women practicing bodybuilding. My first goal is to erase these negative thoughts from the minds of women and girls, given that this sport is not reserved for men alone and girls can practice it in order to be fit,” she said.

Aila, who has been working as a lawyer for 10 years, said she decided to join a sports club in 2014 after suffering from obesity. She wanted to lose weight and get fit despite realizing that she would be subject to many criticisms, which since she has overcome.

She said, “I received my theoretical bodybuilding training from male trainers who taught me how to properly use machines involving heavy lifting in order to avoid serious injuries that often occur in these kinds of sports.”

Aila is working on changing the negative perception of this sport to encourage girls to practice it and maintain their fitness and correct misconceptions about bodybuilding, because many believe that this sport is for men only. She said that she is “educating girls about the importance of this sport, which does not solely develop huge muscles but healthy and strong bodies. This sport highlights the value of women and their ability to practice various sports activities.”

Aila emphasized that “bodybuilding helps girls and women get rid of sagging in certain areas of a woman's body.”

She added, “This sport significantly contributes to strengthening a woman’s muscles when maintaining an intake of foods rich in iron and various vitamins and staying away from harmful foods."

The lack of female sports clubs in the Gaza Strip has prompted a large number of girls and women to work out at home, according to Alia.

The medium-tall, muscular woman said that bodybuilding does not affect her femininity, and her life is no different from other girls in Gaza. She said she started a page on Facebook and Instagram to promote her sports activity and educate girls about the importance of this sport when it comes to building an ideal, consistent and strong body.

Asmaa Abu Ayada, 29, told Al-Monitor that about three months ago she started going to a private club in central Gaza City — which welcomes both men and women — to practice bodybuilding in order to get rid of the fat around her stomach and tone her hand and leg muscles, despite opposition from her parents and siblings. She said that she has been able to fulfill her dream and get the graceful appearance that she wanted after following the trainee’s instructions and adopting a healthy diet.

Abu Ayada, a graduate student, told Al-Monitor, “Society believes it is a luxury for women to work out. I don't care about people and society criticizing me. I see this as an incentive to move forward in practicing this sport, as long as this does not affect my femininity.”

Abeer Radi, 35, told Al-Monitor, “The sport of bodybuilding appeals to many girls and women in Gaza despite the community’s refusal of this idea.” She noted that she practices physical fitness and weightlifting to tone her muscles and relieve stress.

Radi, a mother of three, said, “After joining a sports club for a year, I was able to feel a real difference in my muscles and my overall fitness level after suffering for years from excessive fat. Bodybuilding has become an essential part of my daily routine."

She added that her husband is very supportive and wants her to work out, and this has motivated her and encouraged her to practice bodybuilding. The support she receives from her family makes her regularly practice this sport while gaining more confidence each day.