Despite the conservative nature of Gazan society, which often frowns upon women participating in sports, the Strip has seen a notable rise in female equestrianism in recent years. 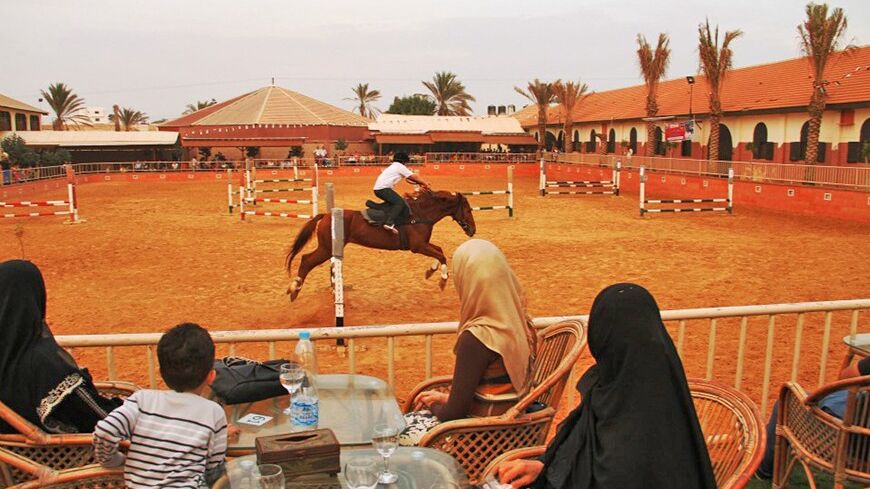 Spectators watch as a member of the Palestinian Equestrian Club clears a jump in the Gaza Strip, Apr 13, 2014. - Mohammed Othman

Two and half years ago, the Palestinian Equestrian Club in northern Gaza adopted a loose outfit as the official uniform for female members, in line with traditions in the conservative Gaza Strip.

Amal Yaghi, the director of the club, which is owned by businessmen belonging to Hamas and some independent investors, told Al-Monitor that the loose outfit was a private policy of the club, and it was presented to female riders based on an agreement with families and the club's board. According to her, this was done so that girls could practice the sport freely, as well as to prevent female riders from "drawing attention" to themselves while riding horses.

"There is a growing demand from young men and women to join these clubs, and families heavily encourage [their children] to practice this sport. We now have between 120 and 150 members, and a third of them are girls. Although now we do not have many members signing up each month, since youth are busy with their studies in high schools and universities, starting from June 1 we will have between 80 and 100 new riders registering each month," she told Al-Monitor.

Yaghi noted that the Palestinian Equestrian Club, which was established in the mid-1990s, is one of the biggest equestrian clubs in all of Palestine. Its total area exceeds 27 dunums [6.7 acres]. She said that there are currently three equestrian clubs in the Gaza Strip, but that the sport is limited to the privileged few as most cannot afford the fees.

“The high prices of the equestrian lessons are another reason that prevents families from sending their children to clubs, in light of the state of extreme poverty from which they suffer. Only high-class families are able to send their children to such clubs,” she said, adding that “the club charges 200 shekels ($60) for a limited number of lessons. This price might increase should the number of monthly lessons increase.”

Salma Shawa, 17, a horse rider who belongs to one of the largest and richest families in Gaza, has found unending support from her family. She told Al-Monitor that society is against such practices, as many frown upon women riding horses.

"I am confident in myself and do what I love ... I find it easy to practice my favorite hobby, and I don't need to pay attention to those who want to bring me down. I won't stop coming to the club, and I come three times every week."

Najah Zaarab, 15, similarly told Al-Monitor that “it is nice for a person to practice a sport they love. I feel that I am one with my horse. I feel thrilled. It is a perfect sport to unwind.” She explained that this is the only sport that girls in the Gaza Strip practice openly, as they are not allowed to participate in any other sports.

Yet despite the growing interest in the sport, conservative Gazan society still adheres to strict customs and traditions, particularly when it comes to females practicing the sport. The Hamas government has previously banned female sports in Gaza, such as the Women’s Marathon last year.

"Although we accept members in the club starting from five years of age and up, we now only have female members in their late teens. As for women in their 20s and 30s, they come to ride horses for short periods. They are not training to be equestrians, but rather ride for fun. This is because we do not have a culture of women in their 20s and 30s coming to train to be jockeys," Yaghi added.

In the south of Gaza City lies the Friends Equestrian Club, which is less than a year old. It is located on five dunums [1.2 acres] of land, most of which is allocated to a track used for training and racing. It is slowly working to expand in size into an agricultural district far from residential areas. Although this club lacks the many facilities that are found in other clubs, it has seen an increase in members, especially in recent months. "Despite the fact that clubs dedicated to equestrianism are relatively new, we already have 25 female members and 50 male members," Mohammed al-Rifati, the owner of the club who also works as a trainer, told Al-Monitor.

Rifati works as a trainer for both male and female riders. "We have seen a high demand from girls and their families. We now have 25 female members, and their numbers increase significantly in the summer. When I carry out training I make sure that the riders do not feel that I am differentiating between boys and girls. The message I deliver is that I am training them to be a good rider, without differentiating between them," he added.

Many of the women riding horses at the equestrian clubs were not wearing hijabs, the Islamic veil, and no government restrictions seem to be preventing them at this stage. Though the sport is on the rise, some locals object to women participating in the sport.

Mohamed Abou Zed, 52, a carpenter from Rafah and middle class, said that horseback riding does not do any good for girls, who should stay at home. “[Horseback riding is] deviating from the [girls’] natural path,” he said. “I do not like sending my girls to these clubs to practice horseback riding because it does not benefit them in any way. Moreover, our habits and traditions forbid us from doing such practices, especially in our eastern society.”

Hassan Ahmed, 40, a taxi driver from Gaza who has six children, expressed similar views. He told Al-Monitor that few families send their daughters to equestrian clubs because of the high fees. “It is well known and agreed in society that it is not right for a grown up girl to exercise this sport. This is not to mention the facts that girls are trained by male coaches, and the dire financial conditions of families,” he said.

The clash between conservative and progressive has a strong presence in this sport, with the parents of daughters participating in horseback riding supportive of females learning the sport, and critical of conservative views against it.

Tareq Zaarab, the father of Najah and a company manager, told Al-Monitor that the conservative Gaza Strip needs courage to overcome the boundaries of women playing sports.

“Last week we were at a resort and my daughter was riding the horse. I was expecting that the people there would be upset, but I was surprised that they applauded her once she was done. Some have even encouraged her to participate in horse races,” he added.

Nabil al-Maqousi, a merchant from the Gaza Strip and a father of two riders, a girl and a boy, said that society has a misconception about female horseback riders.

“For me, I do not care about society, since Islam encouraged horseback riding, and society complicates everything. This explains the small number of female jockeys in [Gaza’s] clubs. Moreover, society has a problem with the way girls ride horses.”

Zeina al-Helou, 15, who has been riding horses for almost a year, told Al-Monitor that while many people object to girls practicing equestrianism, she doesn't pay attention to it. "This opposition doesn't bother me much. The most important thing is that I love and enjoy this hobby. It is not necessary that society accepts everything we do.”