The Israeli military operation in the Gaza Strip last year led to the death of several horses across the enclave and left dozens in a state of shock. 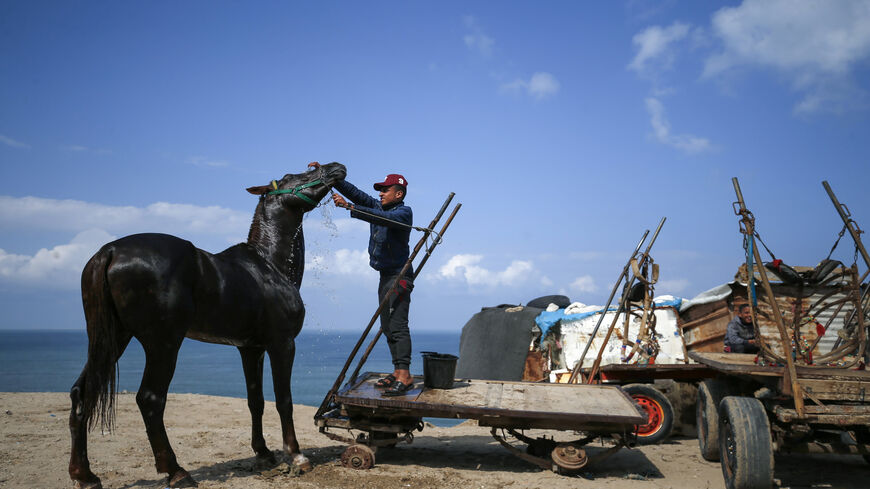 Horses are sensitive animals that need care, attention, psychological comfort and a healthy diet. When exposed to traumatic circumstances, their psyche is affected and they lose their appetite. To recover and rebuild their muscles, sedatives are often used in their recovery.

Horseback riding is a sport that creates a close relationship between the horse and its rider. The animals need a safe environment, but the Gaza Strip does not offer this due to the recurrent Israeli military operations over the years, which led this type of sport to almost vanish.

Mahmoud Daghmash has a stable in the Sabra neighborhood district in western Gaza, where he breeds European and Arabian horses that he uses in wedding parties.

He told Al-Monitor, “Horses are my only source of livelihood. The last war [in May 2021] was devastating because an airstrike killed five of my horses. One night, a site near my stable was being targeted and I couldn’t go there for days to feed the animals. Finally, when I managed to go to my stable, I found Dana who had died of starvation. A week later, her daughter Dahab died; she had succumbed to the grief of losing her mother who was still nursing her. Dana was the most beautiful horse I had; she was blonde. Another mare gave birth to a dead foal, and two other Arabian horses were literally scared to death.”

For Abu Islam al-Ghurra, a veterinarian who has a stable in the Zeitoun district, horses are his only source of livelihood. He told Al-Monitor, “I had 10 horses, but during the war an English mare named Asha Spitzer died as a result of fear. In previous wars, two horses died. However, as soon as the last war broke out I decided to sell four horses [to farmers inside Gaza] because I was unable to provide a safe place for them and because of their poor mental condition due to the war. Horses need a lot of care and are very costly, and the environment in Gaza is not suitable for them.”

Omar Shaheen, head of the Gaza Strip Cavalry Association who has been breeding horses for 33 years, told Al-Monitor, “I bought a British horse called Sultana for $37,000. This breed of horse runs really fast. Sultana has a birth certificate and a passport. I went above and beyond to get this breed, so I bought her to prepare her for the world championships. Sultana was 5½ months pregnant, so I took care of her and paid for her vitamins and muscle tonics, until she gave birth to a filly whom I named Ameera. It was one of the happiest days of my life. I looked after her until she turned two. Just before the war broke out in May, I brought her to the vet for her vaccinations. But she died shortly after during the war.”

He said, “My stable is located in an agricultural area in northern Gaza. A site next to it was targeted and Ameera was unfortunately hit by several shrapnel fragments. Her skull was fractured. I tried treating her, but several days later the vet called me and said that her condition was deteriorating. I went to see Ameera and started calling her name, but she was in severe pain. She could hear my voice but she could not see me because she was blinded from her injuries. Imagine how it feels for someone to raise a horse and then all of a sudden see her in agony and die. Is this Israel’s goal? Why did it kill my horses? Did the horses do anything to harm Israel?”

Shaheen added, “Sultana is still saddened by the death of her daughter. She did not get pregnant again because of her poor mental condition. I had many European horses, but after the war, and because of my own psychological trauma, I sold them all and only kept two horses — Sultana and Qadro.”

The poor economic conditions in the Gaza Strip and the de facto government’s lack of interest in equestrian sports as well as the lack of an environment to sponsor them led to the closure of many clubs that used to breed horses, including the Friends Equestrian Club, Al-Jawad Club, Al-Fares Club, Al-Farouk Club and the Royal Club, leaving only the Friends Equestrian Club up and running.

Amna Ward, from the Sheikh Ijlin neighborhood in southern Gaza, regularly visits the Friends Equestrian Club, where she practices horseback riding and other activities such as pickleball and tennis. She told Al-Monitor, “The club is my only break in light of the constant power cuts and the difficult situation in the Gaza Strip. Horseback riding is a safe sport. I visit the club often with my sons. We sit there for hours with the horses. But the war [last year] prevented us from seeing our favorite horses, and this took a toll on us. I kept inquiring about the horses and whether they were eating and drinking, but was always told that the horses were in a state of shock and were given sedatives because of their extreme fear.”

She noted, “Throughout the war, my sons would ask me whether the horses were fine. One of my sons used to tell me that his favorite horse [at the club] was very afraid and he would ask me how he was doing during the war. I would hug him and try to calm him down, but after the war ended I rushed with my sons to see the horses. I felt as if this horse [my son’s favorite] did not know me even though I spent years taking care of him and was very attached to him. He looked at me with great caution and fear, and I could feel the fear in the tone of his voice. It took the horses a long time to return to normal, but they are unfortunately still not the same as before.”

Mustafa al-Ghalayini, general manager of the Friends Equestrian Club and an equestrian trainer, told Al-Monitor, “Equestrian sports are very expensive as [the 48] horses are on a diet that costs roughly 20,000 Israeli shekels [about $6,200] per month. The war was very bad. The club closed completely, but the operational costs did not stop, as these included the horses’ diet and their breeding expenses. Each day cost me 1,150 shekels [$35] in club expenses while the club was closed. The war led me to incur huge losses.”

He said, “The 48 horses at the club are all European of the German type. My club is home to the largest gathering of horses in the Gaza Strip. It is located in a remote border area and the targets during the war were very close to it. On one of the intense nights of the war, the staff contacted me from inside the club and said that the [Israeli strikes] were very close and that they were going to leave the premises. I told them to release the horses so they could find food and water outside, because the missiles would shake up the stable and the horses were very scared — but the horses refused to leave the stable.”

Ghalayini concluded, “After the war ended I went to inspect the club. I was shocked by what I found. A $17,000 horse had died, while the other horses were suffering from psychological trauma and had lost their appetite. They were exhibiting signs of anxiety. Our horses suffered for three or four months after the war, but we are now preparing them for championships and competitions.”