The ongoing Israeli siege imposed on the Gaza Strip prevents the entry of many medications needed to treat animals, particularly horses, that also suffer from Israel’s repeated wars on the enclave. 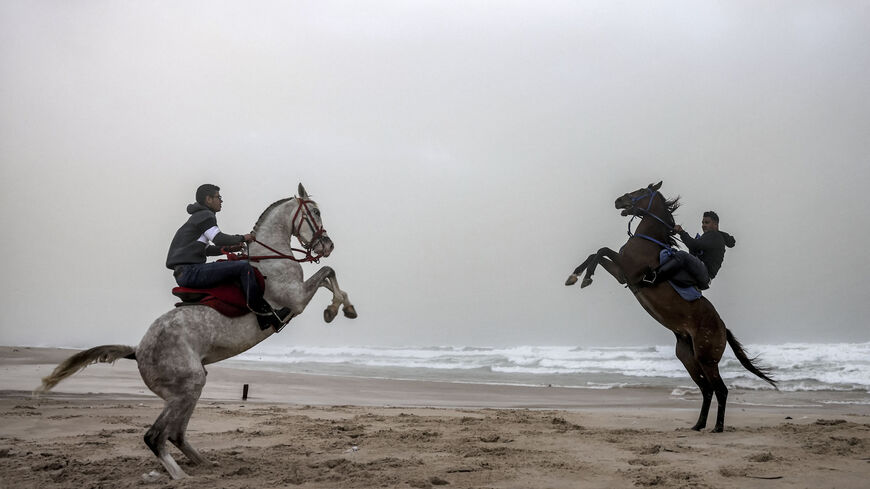 Youths rear their horses as they ride during stormy weather along a beach by the Mediterranean Sea in Gaza City, Gaza Strip, Dec. 8, 2021. - Mohammed Abed/AFP via Getty Images

In the besieged Gaza Strip, residents are not the only ones enduring difficult psychological conditions caused by Israel’s repeated bombings. Animals, including horses, are also suffering and manifesting post-traumatic stress symptoms. The Israeli siege imposed on Gaza for more than 13 years has prevented the entry of medicines intended for animal treatment of various disorders and diseases.

The bad psychological situation of animals in the Gaza Strip has caused many lionesses, for instance, to refuse to nurse their cubs. In June 2015, Nama’a Zoo in northern Gaza turned to a dog, a mother of eight puppies, to nurse the lion cub abandoned by his mother.

Commenting on the difficult psychological conditions of horses in particular, horse breeder Mohammed Abu Zaida told Al-Monitor, “Horses in Gaza have been living in a difficult nervous and psychological state since the end of the last Israeli war on the Gaza Strip in 2021. They are in urgent need of necessary health care, and must take sedatives that are very difficult to secure.”

Abu Zaida, who lost one of his purebred Arabian horses in the last war after it was hit by shrapnel from an Israeli missile, said, “Israel prevents the entry of veterinary medicines such as Rompun used to calm horses and treat their digestive disorders, as well as nutritional supplements such as Probios used to maintain the horses’ physical strength and activity. This has aggravated horses' psychological and physical conditions.”

Abu Zaida noted that the psychological effects of Israeli bombings on horses are clear. He explained, “They are exhibiting strange behaviors such as walking in circles, refusing to eat or drink, stamping their feet hard on the ground and hitting their head against walls. I had to sell my horses to avoid losing them amid the scarcity of necessary medicines and vaccines. The average price of a horse ranges between $9,000 and $15,000.”

He said that even if some medicines and nutritional supplements are accessible, their prices would be very high, which makes it difficult for the breeder to secure them for his horses on a regular basis. “Breeders fear the loss or death of their horses. This dire situation has also affected horses’ athletic performance,” he added.

Ahmed Rayan, who lives in Gaza City, owns a Thoroughbred Arabian horse and three half-bred/half-Thoroughbred horses, whose total prices are estimated at $36,000. He told Al-Monitor, “Israel is banning the entry of horse medication, vaccines and supplements, which affects equestrian sports that are widespread in the Gaza Strip, with several equestrian clubs organizing local horse races and jumping competitions and shows.”

He explained that these medicines and nutritional supplements are necessary for horses. “Horses currently eat three meals a day of corn, barley and bee honey at a cost of $300 per month. Without the proper supplements, medicines and key nutrients, horses are likely to catch several diseases, not to mention losing their physical fitness and shape.”

Rayan pointed out that three of his purebred Arabian horses were killed during the latest war, after the Israeli army bombed agricultural lands adjacent to his stable. “The remaining four horses suffer difficult psychological conditions and are showing aggressive behavior by running at crazy speeds and attacking each other,” he said.

“Meanwhile, only a few sedatives have been available at very high prices. The lack of these medicines in veterinary pharmacies prevented me from completing the horses’ proper course of treatment. My horses are expensive purebred Arabian horses that were brought from Egypt and cost $16,000 each. I also have Thoroughbred horses that cost $14,000 and half-Thoroughbreds worth $7,000 each.”

He added, “Horses in Gaza are denied participation in many Arab and international sports and racing activities, due to the lack of appropriate vaccination and treatments. Some horses suffer general weakness in tendons and joints, as well as neurological diseases, which affects their activity and vitality and prevents them from running different races.”

Veterinarian Hussam Moshtaha told Al-Monitor, “The Israeli authorities’ refusal to allow the entry of medicines, vaccines and nutritional supplements for horses and other animals in the Gaza Strip endangers these animals that are facing serious risks of catching numerous contagious diseases that could kill them if they do not receive proper health care.”

He said, “The most important medicines that cannot be brought into Gaza include Dectomax, Rompun, Tonophosphan, Buscopan and Dexamethasone, and Theraflex pads and other treatments that must be administered on a permanent basis to treat and control diseases in a timely manner.”

Moshtaha concluded, “Some animals are showing clear signs of psychological distress and have become more aggressive. But it is not just horses that are affected — other animals such as dogs and cats are also suffering.”