Arabian horse owners in the Gaza Strip are struggling to keep their horses healthy amid crippling food and medicine shortages. 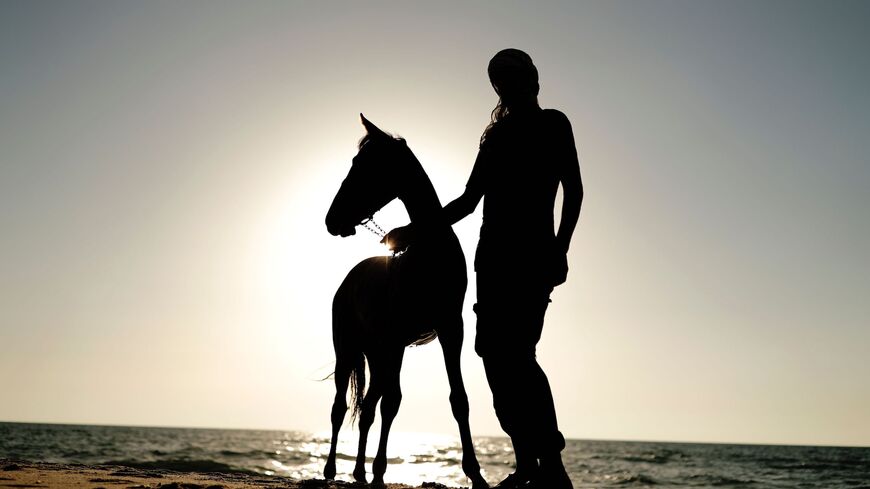 A Palestinian man leads his horse out of the sea after cleaning it in the water in Gaza City on June 13, 2017. - THOMAS COEX/AFP via Getty Images

The Israeli blockade on the Gaza strip affects animals as well as people.

Breeders of Arabian horses in Gaza have been struggling to secure the necessary medicines and vaccinations due to Israeli restrictions. The Gaza Strip has been under a blockade imposed by Israel since the Hamas movement took control in June 2007.

“Breeding horses requires great care to keep the animals healthy and agile," Hazem Abu Zayda, one of the most famous breeders of purebred Arabian horses in the Gaza Strip, told Al-Monitor. "They also need continuous medical and nutritional care, including vaccinations and nutritional supplements and medicines, which are in very short supply because Israel refuses to allow them in. And when Egypt sends them, they are sold at very high prices that not everyone could afford.”

“Israel also bans the entry of new horse breeds into the Gaza Strip and prevents them from participating in Arab and international competitions," he added. "There are only purebred Arabian and Thoroughbred horses brought from the United Kingdom, with the price of one horse reaching up to $15,000.” Horse breeding in Gaza, he explained, is limited to a certain group of amateurs because of their high prices involved.

Abu Zayda said he needs $150 per month to take care of his horses, and that the crippling shortages of medicines and nutritional supplements can cause them to lose weight and become frail and unfit for equestrian sports.

“Horses in the Gaza Strip need ongoing medical and nutritional care to remain healthy, which is currently not available on the market because Israel has banned the entry of horse medicines," Omar Shaheen, another horse breeder from Gaza, told Al-Monitor. "These are necessary to treat and prevent diseases such as the horse flu, mumps, tetanus and fever.”

“One horse needs about 10 kilograms of food per day, which includes special fodder and natural fruits such as apples and dried grapes, as well as carrots, in addition to nutritional supplements," he added. "These horses are sport horses and are very expensive to keep them healthy and in shape."

Shaheed continued, “I lost one of my purebred Arabian horses in the last Israeli aggression on Gaza in May, when Israeli jets bombed the land adjacent to my stable. The horse had severe head injuries. For 10 days, I did everything to treat it, but it eventually succumbed to its wounds.”

Another difficulty of keeping horses in the Gaza Strip, he said, is that it lacks open spaces for equestrian sports, as well as funding for vaccinations and medicines, or facilities to get out of Gaza to participate in Arab and international competitions.

Abdel Salam Haniyeh, assistant secretary-general of the Higher Council for Youth and Sports in Gaza, had announced on Feb. 10 that 10 dunums of the council’s Sports City in Gaza would be allocated for headquarters and a racetrack for the Palestinian Equestrian Federation.

“Gaza has many great talents in equestrian sports,” added Abu Edia, who joined an equestrian club in Gaza five years ago. He hopes that he will be able to participate in Arab and international competitions and that Israeli authorities will allow the entry of new horses from Israel or Syria.