Mohammed Abu Musaed self-funds a mounted archery club, but more Gazans are interested in the sport than he can accommodate. 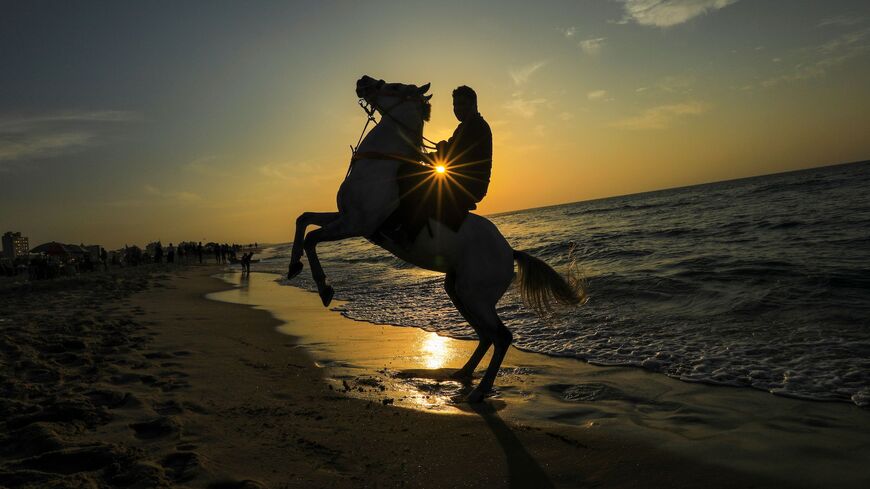 A Palestinian man rides his horse on a beach in Gaza City on Dec. 31, 2020. - MAHMUD HAMS/AFP via Getty Images

ZAWAYDA, Gaza Strip — Mohammed Abu Musaed, Gaza's first mounted archery coach, is assiduously training his team to represent Palestine in international and Arab competitions. Archery, which has recently witnessed a boom on the international scene, is a very old sport.

The archers ride horses wear leather quivers and hold their bows in their hands, trying to keep focus on their targets while their horses navigate a 150-meter path. Abu Musaed, 40, watches and gives words of praise and advice.

Abu Musaed, who was busy preparing the path before archers arrived at the club — a donated empty piece of land in Zawayda in southern Gaza — told Al-Monitor. “Archers must have equestrian skills, muscular and balance, vigilance and quick intuition to be able to control their horses and simultaneously hit several targets quickly. This requires training and practice.”

Residents of Gaza, he said, especially of the southern and central areas where the Bedouin community lives, are known for their horsemanship. He said that he is currently working on a book about the sport, which dates back to the 16th century. One of the first known archery competitions was held in 1583 in Great Britain with the participation of 3,000 archers. He explained that Arabs consider mounted archery the highest level of equestrianism.

He said that he started practicing archery three years ago. His passion for the sport prompted him to learn it online. In 2019, he traveled to Indonesia for a training course. He learned how to make bows and mastered the skills archery. After completing his 29-day training, he returned to Gaza.

Abu Musaed said it took him nine months to manufacture an organic bow using sheep horns, mulberry wood and glue produced from cowhide. He wrapped it with snake skin to protect it.

He said that he currently works with a bow he made using modern tools. He has several others that he made at a low cost, made of carbon fibers and wrapped in leather. He also makes bows from wooden sticks and iron heads ornamented with colorful bird feathers. The color and shapes symbolize different civilizations.

Abu Musaed said it costs about $200 to make a bow. But he stressed that due to the Israeli siege, he doesn’t have access to materials he needs. He sells bows and arrows but the demand for them is weak amid the difficult economic conditions plaguing the Gaza Strip.

Abu Musaed is the only trainer at his club. Before opening it in April 2021, he requested funding from the government, but has yet to receive any support.

He said, “I receive many requests from people asking to join the team, but I cannot accept them due to a lack of financial resources as well as the lack of means to transport horses. It also takes great effort to teach trainees.”

He indicated that archers ride their horses from home, which tires them out before they even get to practice, as many archers live in remote areas.

Abu Musaed has built a team of five archers and has a YouTube channel on making bows and teaching archery.

Abu Musaed said he wants this sport to grow in Gaza so he can eventually establish a bigger mounted archery club and build teams to represent Palestine in international tournaments.

He also pointed out that last year he received an invitation to participate in competitions in South Korea, but he was unable to travel due to a lack of financial resources.

Ahmed Abu Zayed, 27, from Zawayada, told Al-Monitor, “I have loved horseback riding ever since I was a kid. When Abu Musaed offered me a chance to combine horseback riding with archery, it was a no-brainer for me.”

Speaking as he hit all his practice targets, Abu Zayed said he initially found it difficult to hold the bow and arrow and control the horse at the same time. He first learned regular archery at Abu Musaed’s club, and only after mastering it took on mounted archery.

He said, “I feel great pleasure when I practice this sport, as it helps me focus and strengthens my muscles.”

He explained that he has been practicing equestrian sports since 2009, and has become a certified horse trainer in the Palestinian Equestrian Federation. Sadly, he had to sell his horses for economic reasons. He is currently using a relative’s horses to train but says he will buy a new horse as soon as he can.