Two men from the Gaza Strip are getting ready to open the first women’s sports academy in Gaza, which would allow women of all ages to practice and play many different sports. 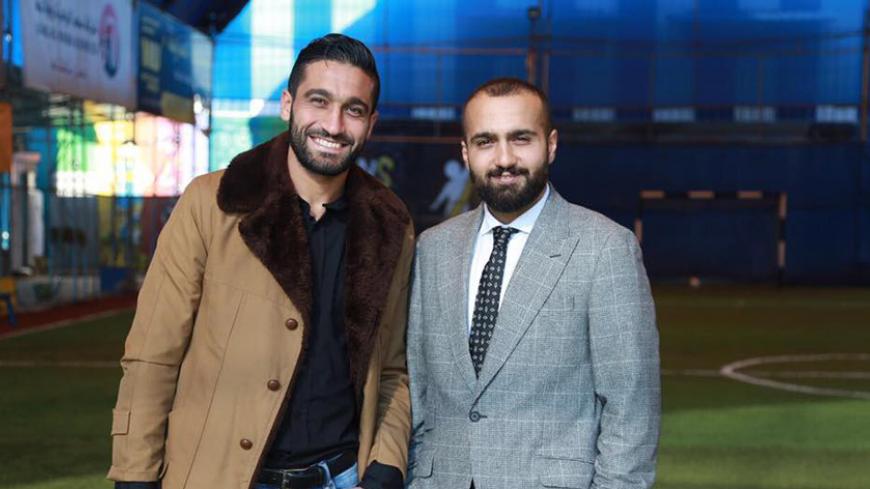 GAZA CITY, Gaza Strip — Rajab Sarraj and Hassan Skaik from the Gaza Strip are preparing to launch the first women’s sports academy by June 2017. This unprecedented initiative aims to help revive women's sports in Gaza and will allow girls and women, between the ages of 4 and 40, to practice sports and become professional athletes.

Sarraj, the director of sales at Wataniya Mobile, told Al-Monitor that this is an athletic investment project that, amid a current absence of female sports clubs, will now give women in Gaza the chance to practice sports. This would allow them to blow off some steam and get rid of the stress caused by the hard political and economic conditions in the Gaza Strip.

He said, “The project, which costs about $350,000, will be initiated in three different phases over the course of three years. Each phase will include a new set of sports. The first one — to be launched in June — will include soccer, karate, running and cycling. The second phase will include basketball, volleyball and swimming. Ballet and gymnastics will be added with the beginning of the third phase.”

Sarraj added, “The second and third phase will be launched before the end of 2017.”

Amer Abu Ramadan, the director general of sports affairs at the Ministry of Youth and Sports in the Gaza Strip, told Al-Monitor, “There are no women’s sports clubs in Gaza, but some private gyms allocate a certain period of time for women to come in and do some fitness exercises only. However, women do not have the opportunity to learn to play soccer, basketball and other sports.”

The two men will take out bank loans to fund the academy. They did not receive government funding, as women’s sports in Gaza are not a priority for the government, according to Sarraj. He said, “We will have to pay these loans back from the profit we make from monthly subscriptions. The first month, subscribers would have to pay 450 shekels [$124], an amount that will include sports uniforms and sports supplies for women. After the first month, the monthly subscription would decrease to only 150 shekels [$41].”

He noted that to train women, the academy will provide both male and female instructors, certified by the Asian federations of each sport, including former coaches from local clubs, pointing out that 40 administrative staff members will be hired as well.

Speaking about the available equipment, Skaik, a soccer player for Az-Zeitoun club in Gaza City, told Al-Monitor, “We established an equipped club in Gaza and we will rent another one in Deir el-Balah governorate. In the next phases, the academy’s work will expand to include Gaza’s Rafah and Khan Yunis governorates.”

Skaik added that the academy will take into account religious traditions and community customs that govern Palestinian society in order to preserve the privacy of women. “All of the academy’s clubs and fields will be completely fenced to respect community customs, so no man can enter or even see women practicing inside the academy.”

In May 2015, the same two young men established the first children’s sports academy in the Gaza Strip, called Champions Academy, and around 350 children joined. In January, they inaugurated a new division at Champions Academy dedicated to children with cancer.

Omnia al-Saifi, an engineering student at the Islamic University, expressed her excitement about the academy. “I am extremely happy about this. I have always wished to play soccer with a sports club and I thought no women’s sports club could be established in Gaza in my lifetime,” she told Al-Monitor.

Saifi said that she and seven of her peers are waiting eagerly for the academy to open its doors so they can play different sports, noting that women’s sports in Gaza will be revived thanks to this academy.

Taghreed al-Amour, a sports journalist and board member of the Palestinian al-Hilal club, said that Gaza was in dire need of female sports academies, noting that this will pave the way for a supportive environment for women's sports in Gaza.

Amour told Al-Monitor, “Women’s sports in Gaza have come to a dead end. Women in Gaza only learn to play sports in physical education classes, which most schools and universities only give to fill in spare time. This does not really help the situation of women’s sports in Gaza.”

Women in the Gaza Strip are marginalized by official sports institutions that deploy no effort to support female sports, which they consider nonessential. For their part, local media outlets rarely shed light on women who were able to break stereotypes and make it on their own in women’s sports.

Amour attributed this issue to several reasons, most notably society’s negative perception of women playing in local sports clubs, which are dominated by men.

According to Abu Ramadan, the Ministry of Youth and Sports “is open to establishing clubs for women, so long as societal and religious norms are respected. Fields need to be completely closed, since women’s sports cannot be allowed in open space.”

However, Abu Ramadan explained that the government does not have any intention to establish women’s clubs for the time being, given the more pressing needs such as building hospitals and schools, which is why women’s sports institutions are the least of the government’s concerns.

By establishing this academy, Sarraj and Skaik are taking women’s sports in Gaza a huge step forward. However, Amour believes the situation needs a lot more to improve, notably, spreading the culture of women’s sports in schools and shifting the government’s attention toward setting up sports facilities to keep up with the needs of women.