Many young women in Afrin, northern Aleppo, which is controlled by the Turkish-backed Free Syrian Army (FSA) are showing great interest in sports, as opposing social customs and traditions begin to fade. 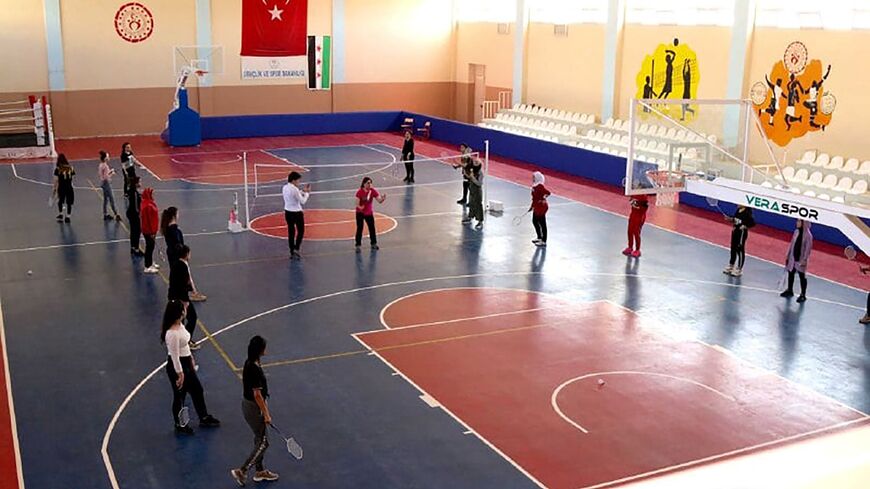 Syrian girls and women practice badminton at the gym in Afrin, a city controlled by the Turkish-backed Free Syrian Army (FSA) factions in northern Aleppo. - Facebook/Afrinmeclis

ALEPPO, Syria  — Girls and women in the city of Afrin, which is controlled by the Turkish-backed Free Syrian Army (FSA) factions in northern Aleppo, are showing great interest in sports, such as basketball, badminton, taekwondo, and football.

The Afrin local council, whose sports office is promoting sports for men and women alike, offers five basketball teams for girls under 18, and the teams train in the gymnasium of the local council’s sports office. A basketball tournament for girls was previously held in February, and another is scheduled for the beginning of 2022.

Mazen Mahrous, the coach of Al-Sham Basketball Club for women, who resides in Afrin, told Al-Monitor, “The team is made up of 20 female basketball players, and we plan on expanding in the future.”

He added, “Many young women are interested in playing basketball, especially girls between the ages of 14 and 18," although they cannot accept all applicants.

Mahrous noted, “Female sports such as taekwondo, karate, football, and badminton, have become very popular in Afrin, but basketball is the most popular.” But he added, “Women's sports activities in Afrin need more support, such as hiring highly experienced and qualified trainers, and creating more sports facilities.”

One drawback, Mahrous said, is the conservative Islamic countryside, "women's sports need time to be more accepted by society.” But, he noted, “The Turkish coordinator in the Afrin area, Mohammed Arshik, is making great efforts to develop sports in the area in general, and there are several teams that have traveled and played in Turkey. I think that women’s basketball is a top priority for Arshik and it is expected to receive great attention in 2022.”

The sports situation in Afrin is on the right track, Mahmous said, but "sports in general in northern Syria lack coordination in terms of player transfers and such. This is due to the lack of specialized federations to coordinate between all sports clubs.”

Evin Sheikho, 17, a player in the Falcons basketball club in Afrin, told Al-Monitor, “We train two days a week, and our training includes fitness exercises as well. I have been a basketball fan since I was young, and I aspire to be a professional player in the future, but for now, I am happy that I have the opportunity to enjoy myself and stay fit.”

Many girls and women in Afrin encourage sports in general, and basketball teams in particular. “Women's sports, in general, are subject to criticism given the society we live in and the customs that prohibit women from engaging in many activities," Abeer al-Halabi, a schoolteacher in Afrin, told Al-Monitor. "I believe such restrictions have begun to fade away in opposition areas, with the support of local institutions, such as the local council in Afrin.”

Halabi pointed out, “Women in the northern and eastern countryside of Aleppo were able to overcome society’s inherited customs and traditions, and they began to participate with men in all aspects of life, not just in sports.”

Nawras Dibeen, an official in the sports office at Afrin’s local council, told Al-Monitor that the office gives great importance to female athletes of all ages, noting that they participate in different tournaments, under the supervision of coaches and specialists.

Women's sports, and basketball, in particular, need to hold tournaments to strengthen the teams, he said, especially since teams are in dire need of friendly matches to improve their skills.

Women's basketball teams receive no financial support. "Support is limited to securing the appropriate court to play all the games," Dibeen said, "and so far no team has gone to Turkey to attend training camps there."