Disabled Gazan basketball players are competing in a fifth annual tournament put on by the Palestinian Paralympic Committee and other organizations. 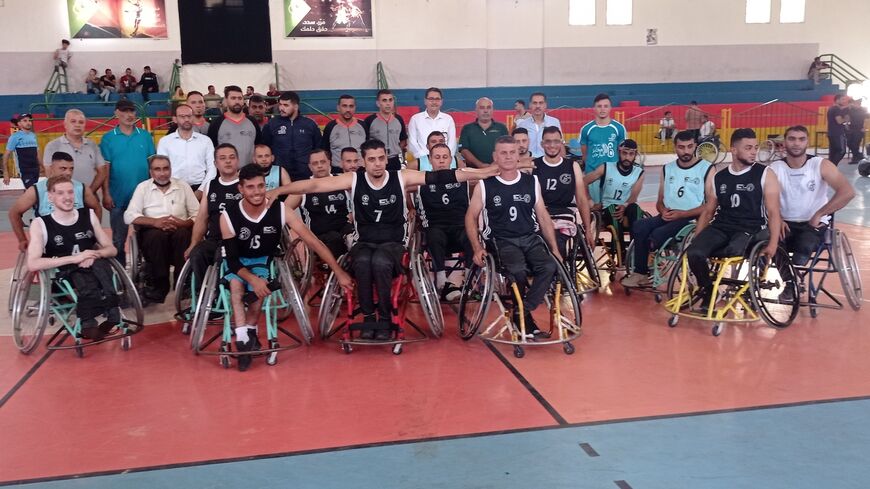 GAZA CITY, Gaza Strip — Two teams of men in wheelchairs jostled for control of a ball in the Saad Sayel gymnasium in downtown Gaza City, as the two clubs, Al-Salam and Al-Asdiqa’, competed Aug. 22 in the fifth annual Wheelchair Basketball Tournament, which kicked off Aug. 15 and ends in early October.

In cooperation with the Palestinian Paralympic Committee and the Palestinian Union of Wheelchair Basketball, the International Committee of the Red Cross (ICRC) have organized a fifth annual tournament to offer physically disabled Gazans a chance to play basketball. The games resumed after an 18-month hiatus resulting from the COVID-19 outbreak in February 2020 and the May fighting between Palestinian factions in Gaza and Israel that resulted in the death of 258 Palestinians and wide destruction of infrastructure and houses.

The May conflict claimed the lives of five disabled people, four men and one woman. Another 46 people were left with disabilities, including six cases of amputations, according to statistics of the Ministry of Health released June 23 on the dead and wounded during the last conflict in Gaza.

According to the latest data available from the Palestinian Central Bureau of Statistics issued Dec. 3, 2019, there were 93,000 persons with disabilities in Palestine, including 48,000 living in the Gaza Strip.

The tournament includes 120 players between the ages of 20 and 30, top tournament official Rashad al-Jamasi told Al-Monitor.

Al-Salam's male and female teams won all four previous tournaments. The club, established in 2004, aims to develop sporting events for people with disabilities and integrate them into society.

Al-Salam coach Rajab al-Sindawi told Al-Monitor that the players are trained to play the game in wheelchairs by highly qualified coaches.

He pointed out that the club receives funding from the ICRC, adding while funding is crucial, the biggest challenges facing the club involve access to Arab and international tournaments. Israel often does not allow sports teams in Gaza to travel abroad through the Erez land crossing, while conditions at Egypt's Rafah crossing are too harsh for people with disabilities to handle, such as very long wait times.

Al-Salam Club player Ibrahim Madi, 29, is from the Zaytoun neighborhood, east of Gaza City. He was injured in 2019 by an Israeli sniper during a demonstration at the border fence, leading to the amputation of his foot.

Madi told Al-Monitor, “I was a football player in several local clubs, but my injury prevented me from playing. Nine months after my injury, I started playing wheelchair basketball.”

Madi aspires to become a player for the Palestinian Wheelchair Basketball Team one day and to participate in tournaments outside the Gaza Strip against other international clubs and teams.

Ahmed Moussa, the director of the physical rehabilitation program at the ICRC, told Al-Monitor, “This tournament aims to improve the players’ physical abilities and rehabilitate them to integrate them into Palestinian society.” He said that the ICRC is committed to funding clubs and tournaments for wheelchair basketball as a humanitarian mission.

Hani Matar, who handles wheelchair basketball in the Palestinian Paralympic Committee, told Al-Monitor, “This league largely contributes to discovering talent that could join the Palestinian Wheelchair Basketball Team to participate in various regional and international tournaments.”

He stressed that the players need ongoing training to advance in the sport and said there is a lack of exchange of expertise with other countries and sending coaches abroad to acquire new skills is very difficult. Matar called on international wheelchair basketball coaches to visit the Gaza Strip to help train the local players.