A new generation of Israeli Druze girls and women are increasingly participating in sports, exhibiting independence and advocating for gender equality in their traditional society. 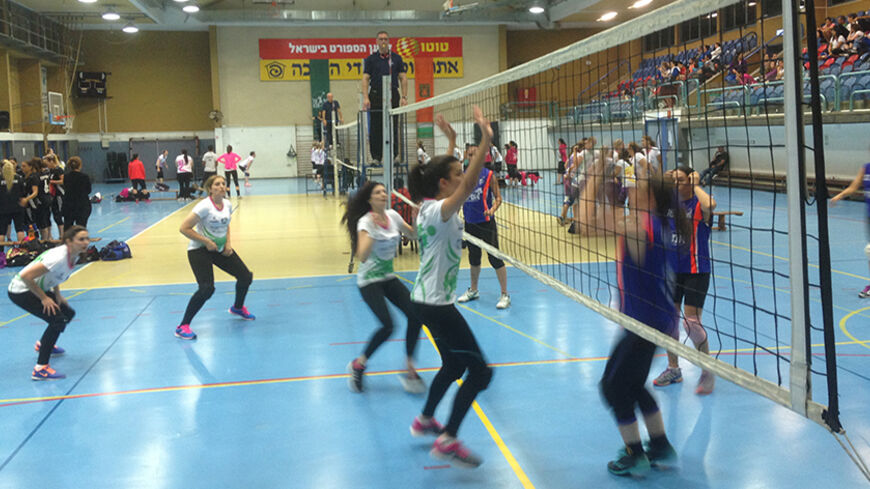 The average sports fan in Israel isn’t too familiar with catchball — also known as Newcomb ball or Kadureshet in Hebrew — a game similiar to volleyball. The Israeli national league, which began about eight years ago, in 2006, consists of 12 teams. The team from Daliyat al-Carmel is the league's only non-Jewish team.

As far as the women on the Druze team are concerned, catchball is much more than a sporting competition. With their hands, they have torn through the traditional veil enveloping them to advance the cause of gender equality in the Druze community.

“We are the first team of adult women in the village,” Wiaam Daksa, 24, told Al-Monitor. A student of materials engineering and chemistry at Technion - Israel Institute of Technology, Daksa skipped class to play in the game. “We have all sorts of sports for girls, but once they grow older and get married, it becomes harder.” Six months from now, once Daksa gets married, she will most likely get a better taste of how marriage can affect an athletic career.

One person who has already experienced the Druze community’s tradition of moderating the participation of women and girls in athletic competition is Aya Azam, 15, from Isfiya. She started playing volleyball for Maccabee Haifa after leaving the local team. “I was a ballet dancer, but I stopped, because I couldn’t keep dancing in tight clothing,” she explained.

Azam is actually one of the lucky girls. Her parents support her participating in sports and refuse to listen to her older brother, now 20, who claims that she should stop playing volleyball as well. As a young girl, her mother was forced to forgo her own dream of becoming a lawyer. She now supports her daughter although it runs somewhat counter to the norm within the Druze community. She wants to help Azam avoid the feeling of having missed out as she did.

“I want to continue participating in sports even as an adult,” Azam said. “In my opinion, if I am already a professional player by the time I get married, I can continue playing. It’s like establishing facts on the ground.”

Daksa, on the other hand, comes from a religious home. Nevertheless, she has been able to convince her parents to keep an open mind. “I manage to enjoy the game, but I also manage to maintain my values,” she said.

There are currently no outstanding female athletes from the Druze community. “Women stop playing sports at a young age. You won’t see them engaging in sports from the age of university onward,” explained Nadia Hamdan, chair of the Naamat women’s organization in the Druze community. “It’s hard for them to imagine doing that as an adult, although you won’t see many Druze men who are professional athletes either.” Even Athena - The Israeli Council for Women's Sport has a hard time finding adult Druze women who are athletes.

Hamdan described various initiatives, which are limited to girls at this stage. They include a cycling club for girls ages eight to 18 in the village of Yanuah, a basketball team in the same village, a soccer team that is soon to be created and a karate club. Hamdan said that education will play a major role in bringing about a change in attitudes. “We want to integrate Druze girls into athletics,” she said. “Sports start developing little by little in the community, and girls are participating in it. As it becomes more and more acceptable, more parents will encourage their daughters to join.”

Of course, this involves much more than just sports. It is a significant lifestyle change in a society that is on some levels very traditional. “Women deserve whatever men get,” Hamdan emphasized in a statement that some would consider controversial in Druze society. “Sport doesn’t threaten values. It fosters values.”

Azam is already looking at the world in a much bolder way than girls from previous generations would ever have dared. “In our community, it is forbidden for women to stick out. It is disrespectful for a woman to do something that would draw attention to herself. But actually, why shouldn’t they? I want to break through and show Druze women that it is possible.”

“Our team is a trailblazer in the Druze sector,” said Halabi, the 33-year-old captain and mother of two. “It is relatively easy at a younger age, with parental support, but over time, women are seen as being responsible for maintaining the home.”

Coach Nasraldeen believes that he is seeing the beginning of a transformative trend. “The team has an impact on the village. The players are competitive and achievement oriented. It is important for them to prove themselves. Their daughters see that their mothers are athletes and want to be just like them. It was hard to accept us at first, but people gradually realized that this is a beautiful, pure, respectable sport.” Nevertheless, Nasraldeen qualified his statement, adding, “There are many girls who want to play, but they don’t want to sign up for the league because of the uniforms and all the traveling that it entails.”

Halabi admits that travel prevents more women from participating. “There are women who say that it is too much of a commitment, but if we read between the lines, we realize that they don’t feel comfortable leaving the village too often.” Her husband was also worried at first, but, she said, “We arranged carpools and chaperones, so he no longer has a problem with it.”

The catchball league has taken the needs of the Druze players into consideration in trying to accommodate them. The organizers allowed them to play in shirts with short sleeves instead of in sleeveless tops. The women also insisted on long tights as well. Even this, however, does not meet the traditional standards of dress among the Druze. The league also agreed that the team would play earlier in the evening, so the women would not be forced to return home late at night.

Michal Sivan, a founder of the catchball league who also plays for the Bnot Gurion team of Kfar Saba, uses catchall as a tool to empower women, in particular targeting those segments of the population where women do not enjoy complete equality.

“We have a group that travels the country,” Sivan said, “spreading catchball everywhere, among every sector, regardless of their mode of dress or their level of physical fitness. It encompasses Bedouin women in the Negev and the Galilee and religious women from the settlement of Elkana. Women from the league are sent to courses where they learn to be coaches and referees. They discover a whole new world and obtain a new career. We have just completed a catchball coaching course in the Bedouin sector. Everyone is invited.”