Youth unemployment in Turkey has hit 21.6%, according to official figures, but beyond the formal definitions and methodologies, the actual situation on the ground is even more alarming. 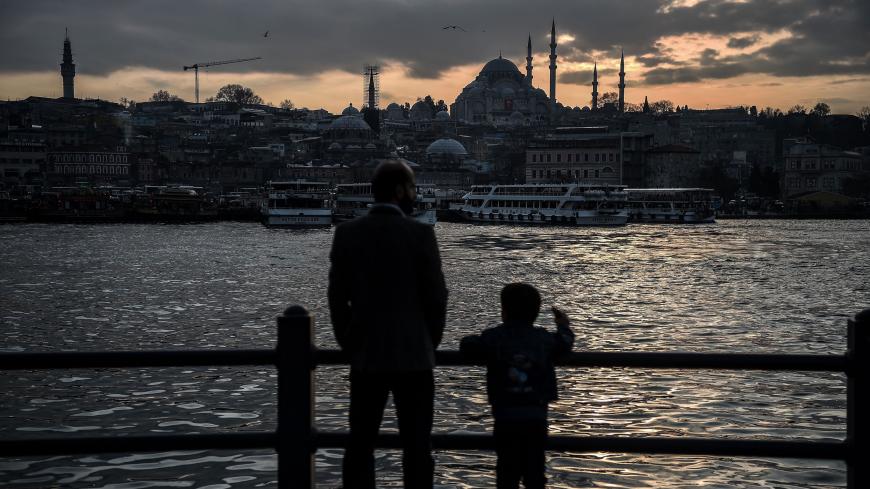 A man and a young boy stand on Galata Bridge at sunset in Istanbul, Turkey, Feb. 19, 2017. - OZAN KOSE/AFP/Getty Images

Having entered a recession in the third quarter of the year, the Turkish economy has been heading for a crisis in the fourth quarter, available indicators show. A 6% drop in the industrial production index, released in mid-December, and a 7% shrinkage in the retail sales volume are both important omens of a depression.

The September unemployment data, released Dec. 17, were supplementary indicators of the recession quarter. The jobless rate hit 11.4% in September, up from 10.6% in September 2017. The army of jobless grew by 330,000 people over a year, reaching nearly 3.8 million.

In this scary outlook, youth unemployment is worth a separate discussion. A closer look into definitions and measurement methods reveals a reality much scarier than what the official data reflect.

First, one needs to ask which age group is considered “the youth”? In social sciences, the floor age for the youth is 15, but the ceiling could vary to up to 29. The International Labor Organization (ILO) produces data on the basis of a definition that considers individuals aged 15 to 24 as the youth.

Turkey’s 15-24 age group numbers 11.7 million and makes nearly a fifth of the country’s population aged above 15, according to the September data. Since the youths represent important potentials and assets for their countries, how they are being raised and prepared for the future is a key question.

Ideally, those in the 15-24 age group should be enrolled in some type of educational institution. Yet, in countries that do not appreciate the importance of education and allocate limited resources to this field, young people engaged in some form of education barely exceed a third of the overall youth, while the rest are working or remain idle, unable to find or not looking for jobs. In social policy, the latter category is called NEET, or "youth not in employment, education or training."

According to the Turkish Statistical Institute (TUIK), the unemployment rate in the 15-24 age group rose to 21.6% in September from 20% a year ago. This is almost the double of the overall unemployment rate of 11.4%. Among women, youth unemployment is worse — 27.2% — and even higher – 33.6% — in terms of nonagricultural unemployment.

The TUIK indicated that in September the NEET rate increased from 26% to 27.4% of the country’s youth, meaning nearly 2 million youths out of 12 million youths, which accounts for a fifth of Turkey’s population aged over 15. The real youth unemployment is reflected in the NEET rate.

According to the TUIK, an unemployed young person, in the narrow sense of the term, is someone between the ages of 15 and 24 who has entered the labor market in the past four weeks, looked for a job through at least one job-seeking channel and failed to find one. Chasing a job is an important criterion here. Hence, those who have not resorted to any job-seeking channels are not counted among the unemployed. According to this definition, out of 5.4 million young people who have entered the labor market, 4.2 million are employed, while some 1.16 million, or 21.6%, have failed to find jobs. Those, however, are the jobless in the narrow sense, i.e., those who have tried to find jobs but have failed to do so. There are also about 2 million others who are enrolled in an educational institution but have not looked for jobs and are basically idle. When this group is included, the number of unemployed youths in the broader sense reaches some 3.2 million, or 27.4% of the country’s young population of nearly 12 million.

Those 2 million jobless youths are not considered part of the labor force because they have not looked for jobs and therefore do not figure formally among the unemployed. Had they looked for jobs and thus become part of the labor force, they would have figured formally among the unemployed for having failed to find jobs, and the youth unemployment rate would have stood at 43.2% rather than 21.6%.

In sum, Turkey’s real youth unemployment problem could be put like this: The jobless rate is 27.4% among the country’s young population of nearly 12 million and some 43% among the actual youth labor force.

The NEET problem, which reflects the real youth unemployment, is a major problem in other countries as well, including Turkey’s emerging-economy peers. According to ILO figures, the NEET rate ranges similarly between 25% and 30% in Argentina, Brazil, India, Indonesia and Mexico. Italy also belongs to this group.

The problem is felt the least in developed countries that place high importance on education and keep their youths enrolled in educational institutions longer. In countries such as Germany, Japan, the Netherlands, Norway and Sweden, the NEET rate ranges between 3% and 6%. In Britain, Canada and France, it is higher, ranging between 10% and 14%.

Times of crisis are especially hard for the youth. Young people are often the first to lose their jobs in crisis-induced layoffs. Those waiting for jobs are forced to postpone their hopes to post-crisis times.

Access to work is another problem, especially for educated youths. In the EU, youth unemployment rates decrease as education levels increase, while in Turkey, things work the other way around. The qualifications Turkey’s education system provides fail to fully meet the needs of the labor market. When it comes to guidance to facilitate a transition from education to work, job placement and matching, institutions and policies are also not adequate.

As prominent Turkish economist Nurhan Yenturk points out in her work, problems such as inadequate education, poverty and social exclusion plaguing Turkey’s youth are so complex that they cannot be explained away with the lack of individual qualifications and motivation. Such problems cannot be overcome merely by reducing unemployment, she said. Problems such as low wages, unregistered employment and harsh working conditions are so rampant in Turkey’s labor market that this in itself shows that employment alone is not the solution.

In such an environment, social state support for the young becomes all the more crucial. Budget allocations for youths must be increased. Assets accumulated at the Unemployment Insurance Fund, which is nowadays used to prop up public banks by overlooking the rules, should be utilized to tackle youth unemployment. The government should consider also tax cuts for youth employment and temporary exemptions from the payroll tax for the young to help them weather the crisis.