More than a fourth of Turkey’s 4.7 million unemployed are graduates of higher education — an alarming trend that reflects not only the country’s economic downturn, but its faltering university system. 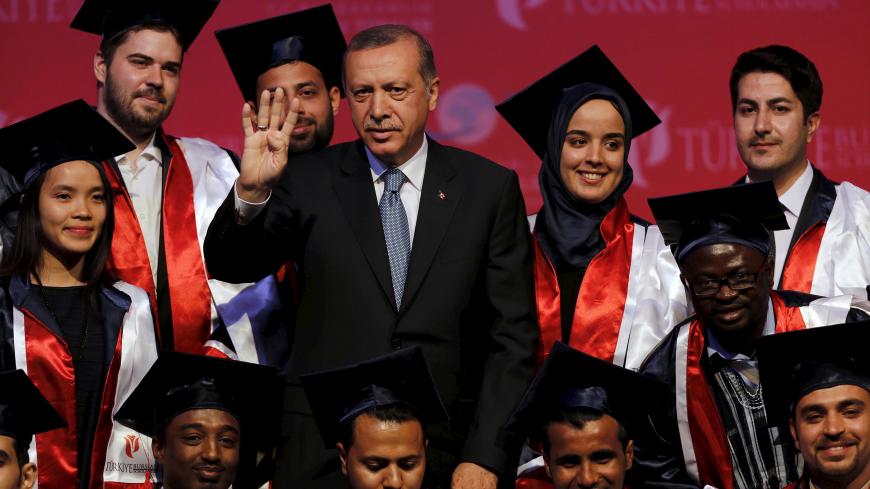 Mounting unemployment has emerged as the most poignant aspect of Turkey’s economic crisis, which the International Monetary Fund expects to result in a 2.5% contraction this year. The number of jobless reached nearly 4.7 million in January, rising by more than 1.2 million over a year, according to figures released April 15 by the Turkish Statistical Institute (TUIK). This puts the unemployment rate at 14.7%, an increase of 4 percentage points from the same period last year. Non-agricultural unemployment rose 4.1 percentage points to hit 16.8%. The jobless rate among young people aged 15-24 is even more alarming, climbing 6.8 percentage points to nearly 27%.

Remarkably, a breakdown by education shows that more than a fourth of the 4.7 million jobless hold higher education degrees.

Higher education graduates make up about a fourth of Turkey’s labor force of 32 million, which comes across as a positive outlook. Yet 12-13% of the educated labor force is unemployed and the uptick in the rate is a source of serious concern. The main reason behind the trend has to do with the quality of higher education in Turkey. The schooling rate in the 18-22 age group has reached nearly 46%, meaning that almost half of the young people in the said age group have had the opportunity to continue studying after high school. The problem is that holding a degree in Turkey does not necessarily mean being a qualified professional in demand.

The number of universities in the country has reached 206, including 129 state universities and 77 private ones, according to figures by the Higher Education Board, which coordinates and supervises universities. All of the country’s 81 provincial capitals have at least one university, and many towns are home to a faculty or some other tertiary school. Yet, out of the nearly 7 million students currently enrolled in those universities, only some 4 million attend regular programs that require their physical presence at school, while the remaining 3 million study mostly on the basis of distance education, involving TV and online courses.

This educational infrastructure has major shortcomings in terms of qualified academic staff and equipment, such as modern labs and libraries. It lacks any planning system that takes into account what kind of labor the country’s economy demands, resulting in a harsh reality where 12-13% of university graduates are unable to find jobs.

While a fourth of Turkey’s jobless hold higher education degrees, another fourth are graduates of high schools and equivalent vocational schools. The remaining half are people with less education or uneducated, mostly laborers.

Taken at face value, access to higher education has increased in recent years, especially for those in the 18-22 age group. The admissions capacity of universities has grown, meaning that the number of graduates who join the labor force has increased annually. In 2018, the labor force with a higher education numbered 7.7 million, increasing by 2 million from 5.7 million in 2014. But many in this fast-growing labor force have remained unemployed. In January, their number stood at about 1.1 million, up from some 700,000 five years ago. With the added impact of the economic crisis, the figure is likely to reach 1.3 million next year.

Which professional groups are worst hit by unemployment? The answer can be found in data the TUIK releases on a yearly basis. Accordingly, the average number of higher education graduates who remained unemployed in 2018 stood at 951,000, and 300,000 of them — approximately a third — were business and management graduates, apparently mostly from two-year distance-learning programs. Among business and management graduates alone, the unemployment rate was 13.2%, slightly above the overall rate.

Some 115,000 diploma holders in the field of education comprised the second largest group of educated jobless, accounting for 12% of the total.

Engineers ranked third. According to the TUIK data, some 91,000 out of 876,000 engineering graduates remained unemployed last year. The unemployment rate in this group was 10.3%, one percentage point higher than 2017.

The turmoil in the construction sector, one of the worst hit by the economic crisis, is taking a toll on architects as well. In the architecture and construction category, the labor force with higher education numbered some 286,000 in 2018, up from about 280,000 in 2017, the TUIK data shows. Out of the 6,000 newcomers, 5,000 were able to find jobs, while 1,000 remained unemployed. Accordingly, the number of jobless architects rose to some 39,000 from 38,000 in 2017, meaning that the unemployment rate among architects reached 13.7% last year, up from 13.5% in 2017. This was 1.3 percentage points above the 12.4% overall unemployment rate among the labor force with higher education in 2018.

According to TUIK data, “journalism and information” is another realm with a high unemployment rate. The labor force holding degree in this field numbered about 40,000, and 10,000 of them — or 20% — were unemployed. The jobless rate was even higher — more than 21% — among those educated in arts, and stood at about 15-16% in the categories of social sciences and humanities.

In sum, finding a job has become a growing anxiety for young people in Turkey as they seek to boost their hopes by pursuing university degrees after high school. The growing demand for higher education has encouraged investments in private universities. While the number of degree holders is on the rise, job opportunities remain limited. The outcome of this discrepancy is a swelling army of educated jobless.