A new, broader set of labor statistics has exposed a big gap between Turkey’s official unemployment rate and the actual joblessness in the crisis-hit country. 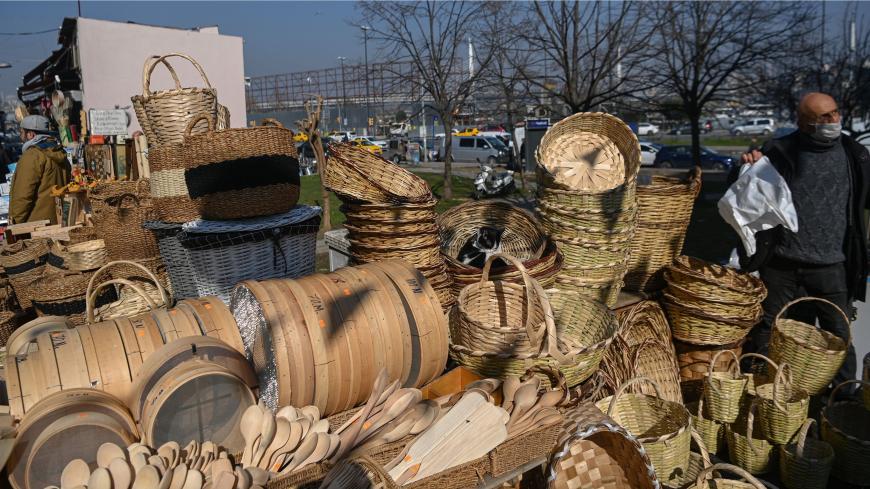 Is Turkey a basket case when it comes to joblessness? New data indicate that Turkish unemployment is more than double the official rate. Here, a street vendor sells baskets as a stray cat enjoys the sun in the Eminonu neighborhood of Istanbul, on Feb. 23, 2021. - OZAN KOSE/AFP via Getty Images

The Turkish Statistical Institute, a government-run agency, has finally broadened the scope of its unemployment data, admitting by implication that the official rates camouflage as much as 60% of the actual joblessness in the country.

Controversy over the credibility of the unemployment rates flared up during the COVID-19 pandemic, which came atop economic turmoil that had plagued Turkey since a currency crisis in 2018. Unemployment was visibly on the rise, but the official rates showed decreases in the number of jobless. The statistical institute has long shared limited data with the public, based on a narrow definition of unemployment, but the figures reached absurd levels when showing declines in both employment and unemployment during the pandemic. Independent economists as well as organizations such as the DISK trade union began to loudly dispute the official rates as President Recep Tayyip Erdogan boasted of reducing unemployment.

In an apparent bid to avoid further damage to its credibility, the statistical institute finally released what it called “supplementary indicators” March 10, citing efforts to comply with the statistical standards of the European Union and the UN International Labor Organization, aimed at better monitoring the labor market.

The new dataset, which contains the country’s labor statistics for January, reveals a gap of about 17 percentage points between the official unemployment rate and the one based on a broader and more realistic definition of unemployment, which stands at more than 30%.

It was the first dataset that heeded International Labor Organization recommendations and offered alternative statistics based on a new questionnaire in the surveys through which the agency measures unemployment. At an international conference in 2013, the organization had reviewed a number of statistical methods and recommended that countries produce alternative statistics on unemployment as the existing ones were deemed inadequate in gauging the labor market.

The narrow definition of unemployment, which remains in place as a basis for Turkey’s official unemployment rate, is limited to jobless persons of working age who have actively searched for a job through at least one channel in the preceding four weeks and are available to start work in two weeks’ time. The definition produced distorted pictures of the unemployment situation, especially during the pandemic, as many jobless stopped looking for jobs out of despair or because they would not go out due to lockdowns or health scare. In August, for instance, those who were not counted as jobless because they did not actively look for jobs numbered about 4.1 million, equaling the number of those whom the statistical institute officially counted as jobless. Their numbers exceeded the “official” jobless by 236,000 in September and by nearly 1 million in November.

According to the International Labor Organization, a realistic measurement of unemployment should also count the underemployed — those who work less than 40 hours per week but are willing and available to work more hours. People in this category numbered nearly 1.5 million among the 27 million counted as employed in Turkey in late 2020, up from about 600,000 at the beginning of the year.

Summing up those three categories, Turkey’s army of jobless totaled 10.2 million in November, for instance, while the official number stood at about 4 million. The official unemployment rate was about 13%, while the broader calculation brings it up to nearly 29%. With such a big difference at hand, the official rate resonates as a camouflage or a means of depriving the public of the truth.

According to the new dataset, released March 10, Turkey’s unemployment rate (not seasonally adjusted) stood at 13.4% in January, with the number of jobless down to about 3.8 million. Yet in the broader rubric that covers those who are ready to work but have not actively looked for jobs out of despair or other reasons or are underemployed, the rate — dubbed “labor underutilization” — is 30.2% (not seasonally adjusted). It is even higher among women, exceeding 37%.

Curiously, Eurostat — the EU’s statistical office — has released unemployment rates for Turkey, based on the broad definition, since 2018. The rate stood at 15.3% in the first quarter of 2018 before rising to up to 24.4% in the third quarter of 2020.