Turkey’s unemployment problem is unlikely to scale down to pre-pandemic levels, bound to remain the main pressure factor on the country’s economy and politics. 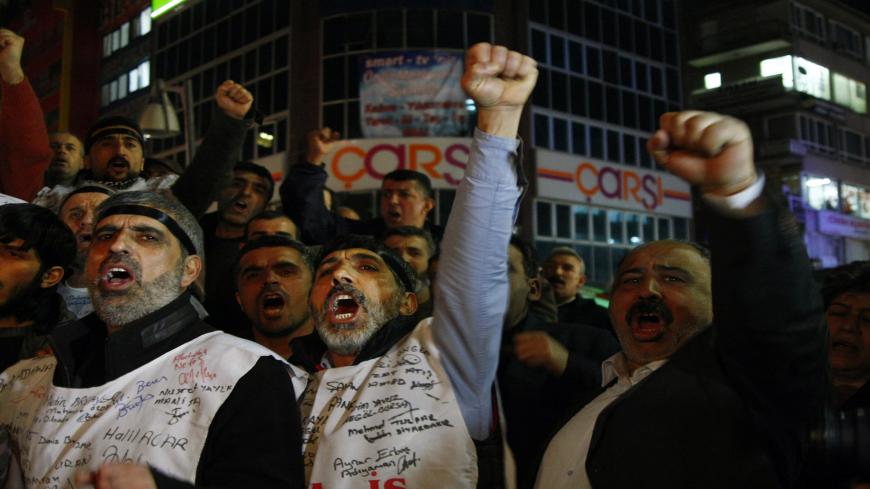 Turkish workers of former state-owned tobacco and alcohol monopoly TEKEL shout slogans in protest against layoffs and the government's labor policy on the 65th day of their strike in Ankara, Turkey, Feb. 18, 2010. - ADEM ALTAN/AFP via Getty Images

The coronavirus pandemic has fueled unemployment across the world and Turkey, whose economy was already ailing, is not an exception. But when it comes to measurement, the figures vary, though none of them is wrong per se, depending on the technical definitions of unemployment. According to official figures released last week, Turkey’s unemployment rate improved slightly to 12.8% in April despite the raging pandemic, while alternative calculations show that more than 50% were left out of work.

The calculation method of the Turkish Statistical Institute (TUIK) is based on the “narrow” definition of unemployment, which is the most widely used across the world. Accordingly, unemployment surveys make a distinction between those who describe themselves as jobless, depending on whether they have actively looked for a job. Those who have not looked for a job in the past four weeks are not considered part of the labor force and thus not counted as jobless.

So, even though many respondents may have not looked for a job because of the pandemic, the TUIK’s calculation remains based on the “narrow” definition of unemployment; hence the institute found that Turkey's unemployment rate declined to 12.8% in April, from 13% in the same period in 2019.

This may sound as black humor, but the institute has a sound counterargument — it is tasked with measuring unemployment according to the “narrow” definition, and producing data beyond that definition is not part of its job.

Still, the institute provides figures on the hopeless unemployed who have stopped looking for work. Those people are categorized as “outside the labor force.” So, using those figures one can calculate the country’s unemployment rate according to the “broad” definition, factoring in the hopeless. This brings the April rate to 24.6%, almost double the official one.

Taking into account a number of other factors, some researchers estimate that up to 52.2% of the labor force was out of work in April. The official measurement of unemployment has always been disputed in Turkey, but never before has the difference reached 40 percentage points.

Essentially, neither the TUIK nor the Treasury and Finance Ministry have raised objections to the 24.6% rate as it is based on the TUIK’s own data.

Renowned Turkish economist Mahfi Egilmez calls the 24.6% rate “the closest to reality,” counting in both the 3.8 million people who have actively searched but failed to find jobs and the 4.6 million jobless who have stopped looking for work, mostly out of despair. Egilmez said, “The growing disconnect between the official and broad unemployment rates in recent times could be explained with several reasons such as the jobless losing hope of finding work due to the economy’s failure to grow and turning to personal connections [to find work] instead of using official channels. Another reason for the big disconnect in the past two months is that the jobless refrained from going out to apply for jobs out of health concerns due to the COVID-19 pandemic.”

Another prominent economist, Seyfettin Gursel, draws attention to the “grave” deterioration in the labor force participation rate. On a sharp decline since December, the rate dropped to 47.5% in April, regressing to the level of August 2012. “Millions of people have left the labor market in a mere five months,” Gursel writes. “We are back to where we stood eight years ago after experiencing a good upward trend thanks especially to women, who were joining the labor force at a fast pace.”

The number of working people was down by 2.6 million in April from the same period in 2019, with half of the decrease stemming from the services sector. But there are also those out of work who appear in the category of the employed.

As part of measures to cushion the impact of the pandemic, the government banned layoffs, allowing only furloughs in return for assistance payments from the Unemployment Insurance Fund. According to data released by the fund, more than 5 million people have received “financial aid” and “short working payments,” keeping their job contracts but relying on government support for periods of three to six months. They are not considered as jobless, but have actually been out of work.

Furthermore, TUIK data show that working people, including many small producers and shopkeepers, worked an average of 39 hours per week in April, down from 45 hours before the pandemic. This, too, could be considered as job loss or, in a sense, employment loss or unemployment caused by the pandemic and restrictions to contain the contagion.

The research center of DISK, one of Turkey’s main trade union confederations, makes a calculation factoring in also those out of work among the officially employed and the working-hour losses, to find that 17.7 million people were out of work in April in the broadest sense of unemployment, corresponding to 52.2% of the labor force.

No doubt, such staggering calculations pertain only to April and are closely related to the fallout of the coronavirus pandemic. The figures are likely to improve in the coming months, barring perhaps the data for May, as Ankara reopened the economy in June despite the ongoing spread. Since then, consumer demand has relatively increased and business has livened up. The jobless discouraged by the pandemic are now out looking for work. Some have already found jobs or returned to old workplaces.

Still, the broad unemployment rate could hardly return to its pre-pandemic level of 22% because the halt in investments continues, consumer demand has yet to return to its old level and the vital tourism sector is agonizing. Capacity drops are seen in many other branches of the services sector and the industry.

In sum, the pressure of unemployment and therefore impoverishment will continue to be the main factor jouncing Turkey’s economy and politics.