Why Hamas wants to distance itself from recent rocket launch

Although no Gaza faction claimed responsibility for the rocket that recently hit southern Israel, some Palestinians believe it was launched by Hamas or Islamic Jihad to deliver a message to Israel without getting Gaza dragged into a major confrontation. 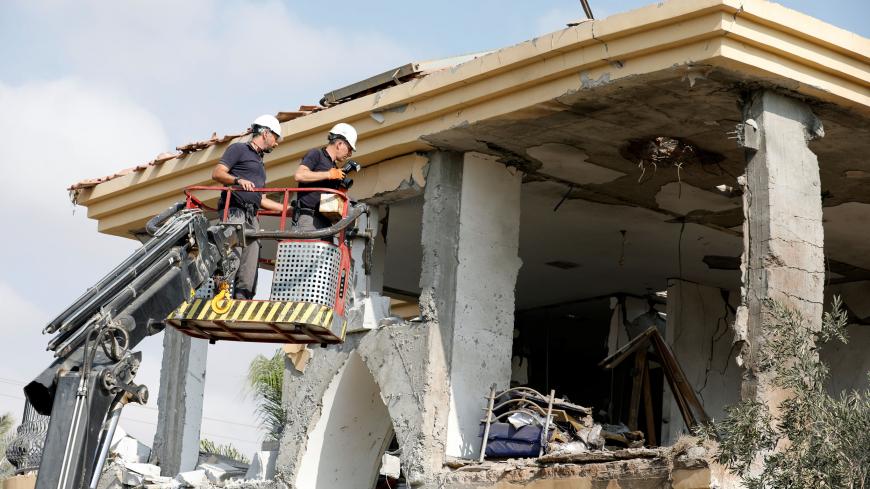 Israeli sappers stand on a crane as they work on a house that the Israeli military said was hit by a rocket fired from the Gaza Strip, in Beersheba, southern Israel, Oct. 17, 2018. - REUTERS/Amir Cohen

GAZA CITY, Gaza Strip — On Oct. 17, a rocket fired from the Gaza Strip hit an Israeli house in Beersheba, in southern Israel, causing significant damage. Yet, surprisingly, none of the Palestinian factions claimed responsibility for the rocket launch. Despite these factions previously having deemed attacks on southern Israel as justified "national action," they sought to distance themselves this time, raising questions as to why.

In a joint statement posted on the website of Hamas’ armed wing, the Izz ad-Din al-Qassam Brigades, on the same day, Hamas and the Islamic Jihad denounced the rocket. They claimed it was an attempt to undermine the Egyptian efforts to bring about a truce between the Gaza Strip and Israel.

In retaliation for the attack, the Israeli army struck 20 targets in the Gaza Strip Oct. 17, including tunnels and Hamas military posts. Following contacts between the factions’ leaders and Israeli and Egyptian officials, the factions refrained from retaliating to avoid any confrontation on a larger scale.

Hamas political bureau member Mahmoud al-Zahar told France 24 Oct. 18 that the party "that fired the rocket wants to cause security instability in the region, in a way to provide the Israeli occupation with a justification to abandon its commitments to the humanitarian problems related to the electricity, water and travel in the Gaza Strip. Thus, [the party] standing behind it is either an Israeli party or a party connected to the Palestinian Authority (PA) in Ramallah.”

Speaking to Al-Monitor, the secretary of Fatah’s Revolutionary Council Majed al-Fityani said that Hamas denying responsibility for the rocket “indicates that [the movement] is using the resistance to achieve partisan goals and interests, most notably to fortify its rule in Gaza.”

Fityani characterized the accusations that Hamas has leveled against the PA as “absurd,” stating, “The PA does not have rockets in its possession. It is struggling against the occupation through popular resistance and international diplomacy to make the dream of a Palestinian state with Jerusalem as its capital come true.”

He added that as it accuses the PA, “Hamas seeks to convince the world and Israel that it has become a party that can be banked on in a genuine truce with Israel and in bringing about peace and security to the region. Thus, Hamas is willing to introduce itself as an alternative for the PA, at a time when the political process between the latter and Israel has come to a deadlock.”

Rockets fired from Gaza often land in open fields near the Israeli towns that are adjacent to the strip, without causing casualties or damage. This is because they are primarily medium-range rockets. The one that hit Beersheba, however, seems to be different. In an Oct. 17 article, Israeli daily Yedioth Ahronoth reported that the rocket has unmatched features and that it was a long-range missile carrying a heavy warhead. It noted that Hamas and the Islamic Jihad have such rockets.

Although there is no concrete evidence showing that a particular faction stands behind this rocket attack, it came two days following the deadline that Yahya Sinwar, the Hamas leader in the Gaza Strip, had given Israel to lift the blockade of the Gaza Strip.

On Aug. 29, local Sama News Agency had reported that Sinwar, speaking at a meeting with political authors and analysts in Gaza City, said, “The deadline before a truce is reached will not last too long.” He anticipated that “there will be a tangible improvement in regard with the lifting of the siege by mid-October 2018.” This, however, did not occur.

Speaking to Al-Monitor, Yahya Moussa, a leader in Hamas, said, “Hamas has no information on the party that fired the rocket. This action was not conducted as part of the resistance factions’ joint operation room," which includes Hamas and the Islamic Jihad. “Based on that, the factions have rejected such an action, which was obviously made at a bad time, in light of Egypt’s tremendous efforts to achieve a truce between Gaza and Israel,” he added.

He explained that the joint room is designed to ensure that any retaliatory Palestinian military action against Israel is done jointly among the factions, to identify the opportune time to carry out such an action, and to determine its magnitude based on that of the Israeli attacks.

He emphasized that his movement is still committed to the armed resistance, and carries on with developing tools, such as tunnels and rockets.

Meanwhile, Islamic Jihad leader Khader Habib told Al-Monitor, “We do not know who fired the rocket.” He too indicated that it came at the wrong time, in light of the Egyptian efforts for an arrangement that would ensure a better life for Palestinians.

“There is a feeling that there is an ample opportunity for a genuine truce that would ward off a major war for both the Palestinian and Israeli sides. Yet, if Israel opted for a war, we ought to counter it,” he added.

Abdel Sattar Qassem, a political science professor at An-Najah National University in Nablus, believes that Hamas and the Islamic Jihad are likely the ones standing behind the rocket fire. “I believe that by refraining from claiming responsibility for [the attack], both movements wanted to send Israel a political message without getting dragged into a major military confrontation,” he said.

He explained to Al-Monitor that by firing the rocket, Hamas wants to further push Israel toward signing a truce agreement without imposing complicated pre-conditions. “Hamas will not consent to any Israeli conditions requiring that the movement relinquish its weapons, tunnels and rockets in order for the truce agreement to be made. Yet it would agree on refraining from using its military capabilities throughout the truce period.”

Israeli Defense Minister Avigdor Liberman, speaking at the Maariv Conference Oct. 15, said in his view a truce agreement with Hamas can only be reached after the movement is dealt "the harshest blow."

Qassem indicated that the Islamic Jihad “maybe wanted to raise concerns in Israel by displaying a sample of the sophisticated rockets that the movement would use in case Liberman followed through with his threats against Gaza.”