In a bid to advance the truce with Israel, Gaza’s resistance factions, including Hamas, seem to have agreed to avoid and stop indiscriminate rocket launches toward Israel and to hand over culprits to the competent official authorities for accountability. 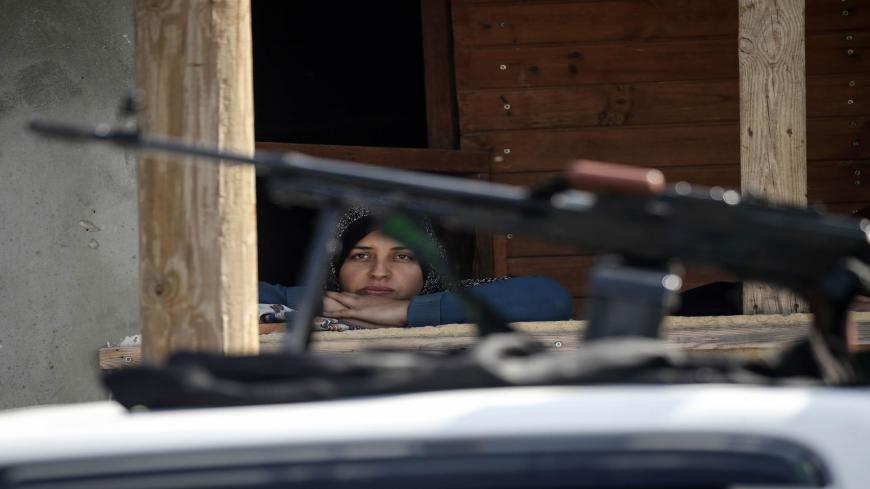 GAZA CITY, Gaza Strip — Gaza’s Public Prosecutor, Diaa al-Din al-Madhoun, held at his office Nov. 6 a meeting with several resistance factions in the Gaza Strip, calling on them to tighten control over weapons and seize them from “abusers,” in reference to individuals using weapons individually outside the framework of national consensus.

The meeting came following the return to Gaza Oct. 28 of a senior Hamas delegation that had visited Cairo for meetings with Egyptian officials discussing the Israeli blockade and the truce with Israel.

Madhoun also called on factions not to provide partisan protection for such individuals and to hand them over to law enforcement agencies.

He stressed that the Public Prosecution “will serve as the strong hand of the law against anyone who tampers with the security and stability of our people,” Palestinian government-run Al-Ray news agency reported.

According to Al-Ray, the faction leaders who participated in the meeting assured Madhoun of their support for the rule of law and their respect for the Public Prosecution’s actions against any individuals “violating the resistance’s approach.”

A leader in Hamas, who requested anonymity, told Al-Monitor, “The meeting with Egyptian officials tackled efforts to develop the truce with Israel, sponsored by Egypt at the end of March 2019, and move it to the next level, including the lifting of the Israeli blockade on the coastal enclave. This is in addition to the implementation of economic and infrastructure projects, and the establishment of industrial zones for the Palestinians in the northern Gaza Strip.”

He noted, “Egyptian officials, however, requested Hamas leaders to tighten control on the resistance weapons and avoid indiscriminate rocket launches toward Israel, which is a major prerequisite to advancing the truce."

The “indiscriminate firing” of rockets from Gaza to Israel is seen as a major challenge to preserve the truce for Hamas. The rockets are fired by armed members from the different Palestinian factions individually, in protest to the truce.

In this context, the aforementioned Hamas leader affirmed that his movement will begin to consider the use of the resistance weapons individually, as an illegal act entailing prosecution, arrest and imprisonment, through official legal institutions in the Gaza Strip represented by the Public Prosecution.

The source added that Hamas is taking such measures since the indiscriminate rocket firing toward Israel by “rogue members” outside the national consensus represents a break of the Palestinian public security and sometimes serves the Israeli interests, as it gives Israeli leaders the opportunity to evade the implementation of the truce understandings.

Most recently, on Oct. 22, two rockets were fired from Gaza into southern Israel, one of which was intercepted by the Iron Dome system, and the other fell in an open area.

While no Palestinian faction has claimed responsibility for the firing of these rockets, it seems clear that Palestinian factions will no longer tolerate individual firing of rockets. One of the main resistance movements in the Gaza Strip, which Al-Monitor cannot name for personal security reasons, abducted Oct. 23 one of its members due to allegations that he was involved in launching rockets without a decision by the movement’s leadership. He was shot in the legs and dropped in front of the Indonesian Hospital in the northern Gaza Strip.

Yahya Moussa, a Hamas leader and head of the Palestinian Legislative Council’s oversight committee, told Al-Monitor, “Hamas is adhering to the truce as long as Israel abides by it too. This truce is accepted among Palestinian factions in Gaza and is gaining national consensus.”

He stressed that his movement is not against firing rockets toward Israel and this is an act of resistance to the “Israeli occupation.” But “Hamas is against such operations when they are carried out individually outside the framework of the joint operations room that includes all factions and that determines responses to the various Israeli violations against our people,” Moussa explained.

Khader Habib, a leader in Islamic Jihad, which Israel accused of firing the latest round of rockets, told Al-Monitor that his movement “categorically rejects any individual operations of the use of the resistance weapons.” He stressed that Islamic Jihad is making every effort to control these individual acts.

Habib noted that there is a special unit — “the military intelligence unit” — in Al-Quds Brigades, the military wing of Islamic Jihad, whose mission is to follow up on the discipline of the armed members and the extent of their commitments to the leadership instructions regarding the use of weapons or firing rockets at Israel.

He also confirmed that his movement is committed to the truce as long as Israel is too, and that there has been extensive coordination with Hamas to control the resistance weapons and curb individual acts.

Sources in Al-Quds Brigades’ military intelligence unit told Al-Monitor that Hamas has recently requested Islamic Jihad to hand over “rogue” members to the Ministry of Interior in Gaza for accountability.

This comes as a new procedure after the yearslong agreement between the two factions, whereby Islamic Jihad had the prerogative to investigate with and hold its members accountable without handing them over to the relevant official authorities.

Talal Okal, a writer with the Ramallah-based Al-Ayyam newspaper, told Al-Monitor, “I believe that Hamas is capable to a large degree to control the weapons and to avoid any indiscriminate rocket launches toward Israel. But I think it was not taking sufficient measures to do so. “

He added, “Now that it has decided to opt for legal accountability for individual acts and use of the resistance weapons, I believe this would greatly reduce such acts."