Israel to build 31 settlement units in heart of Hebron

The approval by Israel of the construction of 31 settlement units in the heart of Hebron's Old City has pushed Palestine to resort to the International Criminal Court. 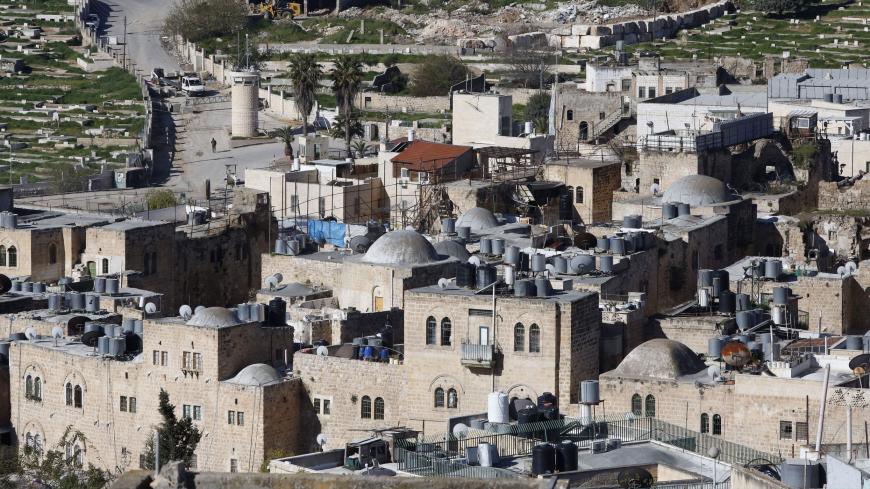 A general view of the Israeli settlement of Abraham Avino (red rooftop) in the center of the Old City of Hebron, West Bank, April 6, 2017. - HAZEM BADER/AFP/Getty Images

GAZA CITY, Gaza Strip — The head of the Supreme National Committee responsible for follow-up with the International Criminal Court (ICC), Saeb Erekat, sent Oct. 18 an official letter to ICC Prosecutor Fatou Bensouda. He called for expediting the opening of a criminal investigation into Israel's ongoing war crimes against the Palestinians and their properties in the West Bank city of Hebron.

The letter detailed the expanding settlement activities and the attacks and violations by the extremist settlers against the city’s residents. Erekat, who is also secretary-general of the PLO, pointed out that the Israeli Cabinet had approved Oct. 14 a project worth roughly $6 million to build 31 additional settlement units in Shuhada Street.

The street is located in the H2 area in Hebron. In 1997, the PLO and Israel signed the Hebron Protocol on partial redeployment of Israeli forces from Hebron. The protocol divided Hebron into two sections: The Palestinian Authority (PA) controls the H1 area (about 80% of the city), while the H2 area is controlled by Israel. The new settlement units represent the first settlement expansion in the area since 2002 when the Israeli Civil Administration approved building 14 apartments in Tel Rumeida neighborhood. The settlement was established on a hilltop overlooking the Old City of Hebron.

He noted that the new project, the first of its kind to be built in the heart of the town since 1997, will separate Hebron’s northern and western parts. He described this development as “a very dangerous precedent” that goes against the articles of the Hebron Protocol.

Erekat continued that the project violates the sanctity of the city classified by UNESCO as a World Heritage Site. “Your office must take urgent action to determine whether crimes falling under the jurisdiction of the ICC have been committed by Israel. This requires immediate attention on your part,” Erekat concluded.

In the same context, Hebron Rehabilitation Committee (HRC) lawyer Tawfiq Jahshan told Al-Monitor that the new settlement project is an extension of the project aimed to strengthen the demographic presence of settlers in the Old City of Hebron. “Six settlements were built in 1967. The new project in the heart of the city will be the seventh. Israel has been closing the Old City and all the ports leading to it for more than 18 years for military and security reasons.”

“There were deliberations and hearings. Most recently in June, the final hearing was postponed and the decision was to be notified — once issued — by way of email. But surprisingly Israel’s Cabinet approved Oct. 14 the financing of the project,” Jahshan added. “By acting before the issuance of the judicial decision, the Israeli Cabinet gave the green light to the judges to refuse the objection.”

He said, however, that the HRC will resort to the Israeli Supreme Court to obtain an injunctive relief to stop the implementation of this project, although he believes this will be unlikely. “There is no competent Palestinian judicial body to examine such cases, so we have to resort to Israeli justice often unfair to us,” he said. “Resorting to the ICC is a necessary step to face the injustice shown by the Israeli judiciary.”

Jahshan noted that Israel had turned the central bus station into a military base in 1985. A decision was issued by the Civil Administration to return it upon completion of the military mission. This has yet to happen. Despite all the objections and petitions by the HCR, the site of the former military base is still controlled by Israel. Israeli settlers live in caravans on this site.

He pointed out that the approval of the 31 settlement units is a very dangerous decision aimed to displace the Palestinians in Hebron and threaten social and economic life. “The new Israeli outpost would be constructed in a street inhabited by Palestinian citizens. Shuhada Street stretches from the southwest to the northeast of Hebron,” he said.

The new settlement units would link Israeli outposts inside the Old City to those surrounding Hebron.

Jahshan added, “There are about a hundred checkpoints and gates over a 1-kilometer [0.6-mile] surface area. Any Palestinian wishing to enter the Old City must pass through these Israeli security checkpoints.”

According to Ayad Morar, the head of the Legal Department of the Colonization and Wall Resistance Commission, the city of Hebron holds a sensitive and strategic position to Israel for Jewish religious considerations. The city houses Al-Haram Al-Ibrahimi (Sanctuary of Abraham), a sacred place for Jews and Muslims. “This is why Israel is seeking to increase its settlement activities in this city, not to mention that Hebron is the largest governorate in the West Bank,” he told Al-Monitor. “It is difficult to obtain a decision that upholds the objection raised to the ICC since the new settlement project is to be built on land that was previously expropriated and Israel claims that it owns it.”

Morar noted that the current wave of settlement activities is unprecedented especially that Israel feels it is exempted from any accountability. “The Palestinian government should resort to the ICC to hold Israel accountable. It is also necessary to develop a clear strategic plan to attract international public opinion in favor of the Palestinian cause.”

Political analyst Assaad al-Aweiwi believes that establishing settlement units in Shuhada Street would strengthen the Jewish control in Hebron’s Old City. He told Al-Monitor, “This will entail more complex security measures and more harassment, leading to dangerous and negative repercussions on the residents and their social and economic lives and restricting their ability to communicate with the outside world.”

He said, “Israeli security measures make it impossible for Palestinian residents and settlers to get along. Extremist settlers do not accept coexistence.”

Aweiwi noted that about 70% of the Old City is under Israeli control. “The Old City has become fragmented and disconnected from its historical evolution,” he said, adding that the Palestinian division has produced frustration in the Palestinian street and restricted peaceful public action against Israel and its plans.

Al-Monitor spoke to Mamoun Abu Amer, an expert in Israeli affairs. He said, “The Israeli Cabinet has approved the project in light of an international political cover for the settlement expansion project, especially in light of the US government support. This also comes as the Israeli Knesset elections are set for November 2019. Israel’s current Cabinet wants to prove that the settlement project and the Jewish nation are of utmost importance. Meanwhile, the Palestinians seem unable to face the settlement expansion.”

He added, “Popular resistance to stop this settlement project needs political will and broad mobilization efforts.”

Mamoun called on the PA and the factions to unite efforts and cooperate in fighting settlement projects, especially since the issue of settlement activities is one of the uncontested issues among all Palestinian parties.