November elections may do little to end the standoff between Bahrain's Sunni-led government and leaders of the country's Shiite majority. 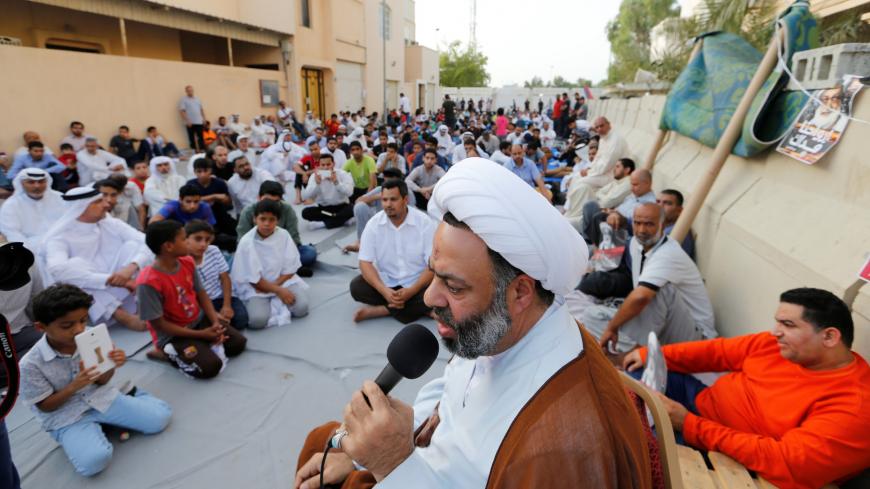 A Shiite cleric delivers a sermon as supporters are seen during a sit-in outside the home of Bahrain's leading Shiite cleric, Isa Qassim, in the village of Diraz west of Manama, Bahrain, June 21, 2016. Bahrain had stripped Qassim of his citizenship, and later convicted him of money laundering; Qassim was released in July to fly to London to receive medical treatment. - REUTERS/Hamad I Mohammed

The Al Khalifa royals hope that Bahrain’s upcoming quadrennial elections, set to take place Nov. 24 — and Dec. 1, if runoffs are necessary — will mark “a new chapter of the march of democratic development” in the island kingdom. Yet there is good reason to doubt that these elections will serve to enhance the ruling family’s legitimacy in the eyes of the Shiite opposition. Indeed, on Oct. 9, Bahrain’s dominant Shiite opposition group — Al-Wefaq National Islamic Society —called for a national boycott of the elections. This further indicates the extent to which many Bahraini Shiites believe that they are not genuinely represented in the government and that participating in next month’s elections for the lower-house would be counterproductive to their struggle.

Bahraini authorities dissolved Al-Wefaq in 2016, accusing the Shiite Islamist society of “harboring terrorism,” and issued a law in May that prohibits its leaders and members from running in next month’s elections. Last year, the regime also dissolved the dominant secular, left-wing group al-Wa’ad. Amid this contraction of political space, more Shiite oppositionists have turned to militancy after abandoning hope for democratic reform in their country. This radicalization of some Shiites in Bahrain has taken place against the backdrop of the regime’s hard-liners gaining leverage over the monarchy’s more moderate elements that are more open to making concessions to the Shiite opposition.

In Bahrain the current state of affairs remains tense. The recent detention of 111 out of the 169 people who allegedly belonged to Bahrain’s local Hezbollah offshoot — “Bahrain’s Hezbollah” — has followed the arrests of scores of Bahraini Shiites —accused by the state of waging or promoting terrorism, yet defended by human rights organizations as political prisoners and peaceful dissidents. In January 2017, the execution of three Shiites convicted of killing three policemen in March 2014 marked Bahrain’s first use of the death penalty since the Arab Spring broke out, leading to strong criticism from abroad based on the view of the trial as unfair. In May 2018, a Bahraini court voided the citizenship of 115 people, handing almost half of them life sentences based on terror-linked charges. These citizens join hundreds of others whose Bahraini nationalities have been revoked and rendered stateless by authorities since 2012. Of these native Bahrainis, some have been expelled from the archipelago country.

The Manama regime continues to blame Iran for much of the country’s internal unrest. Notwithstanding open questions about Iran’s true involvement in Bahrain’s domestic affairs, which many accuse Bahraini/Saudi authorities of exaggerating, the current climate has afforded the Islamic Republic greater opportunity to exploit Bahrain’s internal problems to its own advantage. The contraction of political space in the archipelago state has added momentum to the arguments, made by certain Shiites, that the opposition might as well look for support from abroad (i.e., Tehran) while all efforts to constructively engage with the regime in Manama remain futile and pointless.

As Bahrain fails to resolve the political crisis that has unleashed waves of instability in the country since 2011, the tense post-2011 regional climate continues to further undermine the prospects for peaceful resolution of Bahrain’s internal sources of unrest. Protecting the Al Khalifa rulers in Bahrain, which since 2003 has been the Arab world’s only Shiite-majority country ruled by a Sunni regime, remains a high priority for Saudi Arabia, which along with the UAE heavily influences Manama. The Saudis have constantly seen the specter of any successful Arab Spring revolution within the Gulf Cooperation Council — especially if the revolution is led by Shiite Gulf Arabs who receive, at minimum, moral support from Tehran — as crossing a red line.

As Bahrain remains highly dependent on Saudi Arabia and the UAE for financial and security assistance in the post-2011 period, the regime’s ability to make concessions to the opposition is greatly limited by its key regional alliances. From Riyadh’s vantage point, the liberalization or democratization of Bahrain’s political system would inevitably serve to advance Iran’s geopolitical interests in the Arabian Peninsula and Gulf, and thus the Al Saud rulers maintain pressure on Bahrain’s royals to prevent the country’s Shiites from achieving significant political gains, seeing Al-Wefaq as merely a fifth column of Tehran. Having President Donald Trump in the Oval Office has further emboldened the Manama regime, with the US administration seeing Bahrain’s political crisis through Saudi lenses. The administration views the archipelago kingdom as an important battleground in the struggle to counter Iran’s regional ascendancy and refuses to put the same pressure — however limited it was — that the Obama administration applied on Bahrain’s leadership to make improvements in the area of human rights and democratization.

With Al-Wefaq having called for a boycott of next month’s elections in Bahrain, a low voter turnout among large Shiite segments of the country can be expected. A legitimate concern is that the vote may result in new waves of instability if certain anti-regime elements violently protest the elections. Unfortunately, the combination of the regime's showing no sign of easing its grip on the Shiite opposition (including the of the detention of the Al-Wefaq leadership) and the Shiite society’s call for a boycott show the two sides are not making the necessary concessions that could realistically move the archipelago state toward any resolution.

Looking ahead, what remains to be seen is if either side will be willing to make concessions first, unquestionably taking political risks in doing so. Yet with Al-Wefaq leaders barred from running for the lower house, the opposition is clearly set on refusing to grant any sense of legitimacy to the electoral process. It seems that the regime leadership, with strong support from Riyadh, Abu Dhabi and Washington, has determined that eradicating organized political opposition is the favored strategy for maintaining stability in Bahrain as Shiite militants, allegedly under the umbrella of Al-Wefaq, continue to clash.

Undoubtedly, Bahrain’s failure to overcome the stalemate between the regime and opposition will come at the expense of the island kingdom’s economic health. For Bahrain to once again capitalize on its transparent financial sector, highly educated population, relatively strong private sector and tourism industry to be a vibrant Gulf state, it is necessary to heal the sectarian divisions and end the 7½-year impasse. Ultimately, Bahrain’s crisis is continuing largely due to a trust deficit that continues to grow; unfortunately, next month’s elections appear unlikely to narrow it.