The Bahraini government is sending a message about loyalty to its population by removing the organizations representing its Shiite and secular opposition from the political arena. 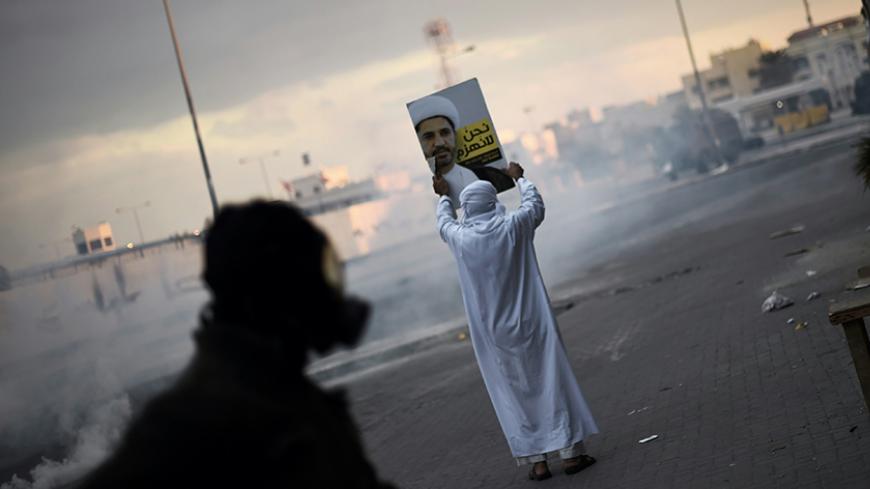 Political space is narrowing in Bahrain as the government steps up its efforts to combat terrorism and weaken the Shiite opposition, which receives, at minimum, moral and ideological support from Iran.

Against this backdrop, last month brought what the Bahrain Institute has called the “deadliest day since protests began in 2011.” On May 23, clashes between security forces and protesters resulted in five deaths and 286 arrests as the former conducted an operation in Diraz, Qassim’s hometown. At the time, the cleric’s supporters were holding a protest in the town, which Bahraini security forces have blockaded for several months amid calls from Qassim’s followers for Bahrainis to stage gatherings across the archipelago nation. The escalating violence, which the government says followed a “terrorist cell” attacking officers, involved the firing of tear gas and shotguns.

The usual actors responded, as expected. Iranian Foreign Minister Mohammad Javad Zarif was quick to link the loss of life in Diraz to the May 21 speech delivered by US President Donald Trump in Saudi Arabia in which he praised Arab Gulf rulers and offered his support. Zarif tweeted that the “emboldened Bahrain regime” had waged a “deadly attack on peaceful protests,” marking the “first concrete result of POTUS cozying up to despots in Riyadh.” Hezbollah warned that harming Qassim “will open the doors for [an] unpredictable outcome and dangers.”

Bahraini officials are not only finding Shiite opponents guilty on terrorism charges, but Sunnis ones as well. On May 31, the High Civil Court ordered the dissolution of the secularist National Democratic Action Society – Waad (“waad” means “promise”) and the seizure of its assets. Authorities ruled the predominantly Sunni, left-wing society, which has expressed solidarity with al-Wefaq, guilty of “serious violations targeting the principle of respecting the rule of law, supporting terrorism and sanctioning violence.” According to the court’s ruling, Waad violated the Law on Political Associations by describing the three aforementioned Shiite men executed as “martyrs,” breaking the law by expressing solidarity with al-Wefaq during the course of its dissolution and calling the 2002 constitution “illegitimate.”

Ibrahim Sharif, Waad’s former secretary-general, whom authorities have accused of inciting hatred, has been in and out of prison since unrest began in Bahrain, in 2011. In 2014, Justice Minister Khalid bin Ali Al Khalifa filed a case against Waad for electing him as its leader. In March, the Justice Ministry filed another case against the society, accusing it of promoting the “violent and forceful overthrow” of the government after Waad released a statement on the anniversary of the 2011 uprising asserting that the country was experiencing a “constitutional political crisis.”

Waad’s leaders deny that the society has broken the Law on Political Associations, maintaining that they remain committed to peaceful reforms. Regardless, by dissolving al-Wefaq and Waad, Bahraini officials have removed Bahrain’s two largest organizations from the political arena and have done so using remarkably similar anti-terrorism language.

After news of Waad’s dissolution reached Washington, a State Department spokesman said that the United States is “deeply concerned” by the Bahraini court’s ruling and urged it to reverse the decision while keeping in mind that “opposition parties that peacefully voice criticism of the government play a vital role in encouraging societies that are tolerant, inclusive and pluralistic.”

Yet, at the Arab Islamic American Summit in Riyadh, Trump signaled that Washington is fully committed to improving its “wonderful relationship” with Manama. Trump gave the Sunni Arab Gulf states his assurance that America’s “friends will never question our support.” Praising in particular Bahrain and all the other Gulf Cooperation Council states (except Oman) in his speech, Trump credited the government in Manama with “working to undermine [terrorist groups’] recruitment and radicalism” while promoting “security in the region.”

Indeed, Trump’s speech illustrated the extent to which he views the Middle East through a Saudi-GCC lens, maintaining that Iran represents the main source of terrorism, extremism and regional instability. Naturally, Bahrain has an important role to continue to play in US Middle East policy as Trump seeks to strengthen ties with the Sunni Arab states on Riyadh’s side of the Saudi-Iranian geo-sectarian rivalry, to counter Iran’s expanded influence, while also simultaneously combating Salafist-jihadist forces, such as the Islamic State and al-Qaeda.

Whereas President Barack Obama's administration often condemned Bahrain’s narrowing of political space in the island sheikdom in an effort to promote human rights, Trump’s inner circle believes that doing so risks jeopardizing key US interests with respect to countering Iran’s ascendancy and combating Salafist-jihadist forces in the region.

Bahrain's uprising was overwhelmingly nonviolent when it erupted in 2011, but since 2012-13, violence has been on the uptick, with more of the disaffected embracing militancy over nonviolent protest. As anti-regime militancy gains greater support among segments of Bahrain’s Shiite opposition, Manama is taking action to aggressively stem rising levels of terrorism. Whereas Obama’s administration usually received the Bahraini government’s claims about Iranian-sponsored terrorism in the Arab Gulf country with a hefty dose of skepticism, the current inhabitants of the White House take Manama's concerns about foreign-hatched threats to Bahrain’s security seriously.

Within the framework of combating terrorism, Bahrain’s government is sending a clear message to the population about loyalty to the country’s monarchy in ordering the dissolution of the constitutional monarchy’s main Shiite opposition society and its largest secular political group. Its extra confidence in US backing in the broader struggle against terrorism as well as support from London, Riyadh and Abu Dhabi are key factors in play.