Will Bahrain use military trials against Shiite leader's supporters?

Bahrain recently amended its constitution to expand military courts' jurisdiction, perhaps in anticipation of fiery protests once a verdict is announced in the trial of Sheikh Isa Qassim. 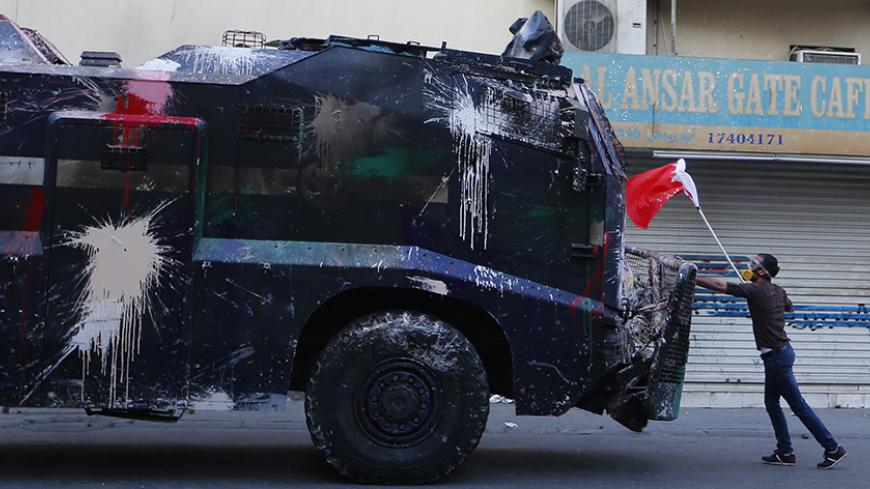 A protester holding a Bahraini flag confronts riot police in an attempt to stop them from entering the village of Bilad al-Qadeem, where protesters had gathered outside the home of Shiite Muslim opposition leader Sheikh Ali Salman, south of Manama, Bahrain, Jan. 6, 2015. - REUTERS/Hamad I Mohammed

Bahrain's Supreme Criminal Court once again has delayed its potentially explosive verdict in the money-laundering case against Shiite spiritual leader Sheikh Isa Qassim, and authorities could be planning to use military courts to prosecute his supporters if violence erupts once the decision is announced.

The court was to issue its ruling March 14, but instead adjourned until May 7. Qassim’s defense lawyer, Abdul Rahman Khashram, told Al-Monitor he does not expect the May session to be delayed and that so far, there has been no order to arrest Qassim, who has denied all charges. On Feb. 27, the court had postponed the ruling until March 14.

During trial proceedings, Bahraini authorities accused Qassim of establishing groups affiliated with a radical sectarian political group linked to Iran and Iraq, and of misappropriating funds and smuggling them to Iraq and Iran since 2009. The funds in question include $10 million found in an account under his name at the Future Bank in Bahrain.

Qassim's followers have protested his situation for almost a year, gathering in front of his house in al-Daraz village in northwest Bahrain to express solidarity with him. On June 20, the Ministry of Interior stripped Qassim of his nationality, accusing him of promoting violence and sectarianism as well as conspiring with foreign governments.

The protesters have cornered the government in the court of public opinion. The Sunni government cannot take back its decision to prosecute Qassim, but it fears angry Shiite repercussions, such as massive protests or terrorist attacks, if he is imprisoned or exiled. Qassim is protected by hundreds of Bahraini Shiites who have said they are willing to defend their leader until death.

On March 14, violent clashes broke out in al-Maamir, about 6 miles south of the capital, Manama, between Qassim’s followers and anti-riot police. Qassim’s representative in Iran, Abdullah al-Daqqaq, predicted in January that the trial would trigger a bloodbath in the region, not just in Bahrain.

Possibly in preparation for such a reaction, parliament recently voted to amend Article 105(b) of the Bahraini Constitution, which addresses military courts' jurisdiction. The article previously stated, “The jurisdiction of military courts shall be confined to military offenses committed by members of the Defense Force, the National Guard and the Security Forces. It does not extend to other persons except when martial law is declared and within the bounds prescribed by law.”

The amendment removed the term “confined." The article now reads, “The law organizes the work of the military judiciary and specifies its jurisdiction if the offenses are committed by the Defense Force, the National Guard and the Security Forces, among others.”

The change allows military courts to try civilians accused of violence against soldiers, facilities and military equipment. The new amendment won the approval of 32 of the 35 parliament members who attended the session Feb. 21. (There are 40 members total, and they are mainly Sunni.) Bahraini King Hamad bin Isa Al Khalifa, a Sunni, ratified the amendment March 5.

Still, many Shiite clerics in Bahrain, Iran and Iraq are not as angry about how the amendment affects their followers in Bahrain as they are about their own potential financial losses.

The Bahraini government monitors money collected for religious purposes in the country. Shiite clerics like Qassim collect a "wealth tax" on behalf of the grand ayatollahs from their Shiite followers, be they traders, employees or workers. The clerics then send the money to religious authorities, such as Iraq's Grand Ayatollah Sayyid Muhammad Sa'id al-Hakim and Iranian Supreme Leader Ayatollah Ali Khamenei. Olamaa’ Bahrain, a group of Bahraini Shiite clerics close to Iran who oppose the king's rule posted a harsh statement on Facebook Feb. 28. They accused Bahraini authorities of using Qassim’s trial to target Shiites’ wealth tax obligations.

Mohammad Milad, the chairman of parliament's Legislative Committee, said during that session that the constitutional amendment mainly targets civilians who work in military institutions.

The majority of the 13 Shiite members of parliament voted in favor of the constitutional amendment. These 13 members won in the Bahraini parliamentary elections in November 2014 as independents because the main Shiite parties boycotted Al-Wefaq National Islamic Society, which considered the elections useless and said they only further entrench the political status quo. Only three Shiite parliament members refrained from voting in favor of the amendment; two of them, Jameela al-Sammak and Ali al-Ateesh, said the amendment needed further study and advised against rushing it — the third, Majeed al-Asfour, said the new text is not clear and could be misused against civilians.

However, one Shiite parliamentarian told Al-Monitor on condition of anonymity that he voted for the amendment and believes the government’s reassurance that it will restrict the amendment's use to terrorists only, rather than peaceful opposition members.

“Some of those who agreed to the amendment still have doubts about its real motives and are unsure about the promises of military and security officials not to use the new law against political opposition members," the source said. "Milad’s statements were not convincing, especially when he said that the constitutional amendment targets civilians who work in military institutions. We had to consult the Bahraini king and obey his wishes to pass the amendment and approve it, although we expect our popularity to suffer in Shiite circles. But if we reject the amendment, we risk facing bigger losses. This is the lesser of the two evils.”

With Qassim standing his ground in Bahrain, and with the sit-ins in front of his house and the political tensions between Iran and the Gulf countries, the prospects for the success of Prime Minister Khalifa bin Salman Al Khalifa's government remain blurry.