Manama’s exclusion of popular political groups from Bahrain’s political scene, accompanied by a wide crackdown on opposition figures, could lead to militancy gaining broader power and appeal in the Shiite opposition. 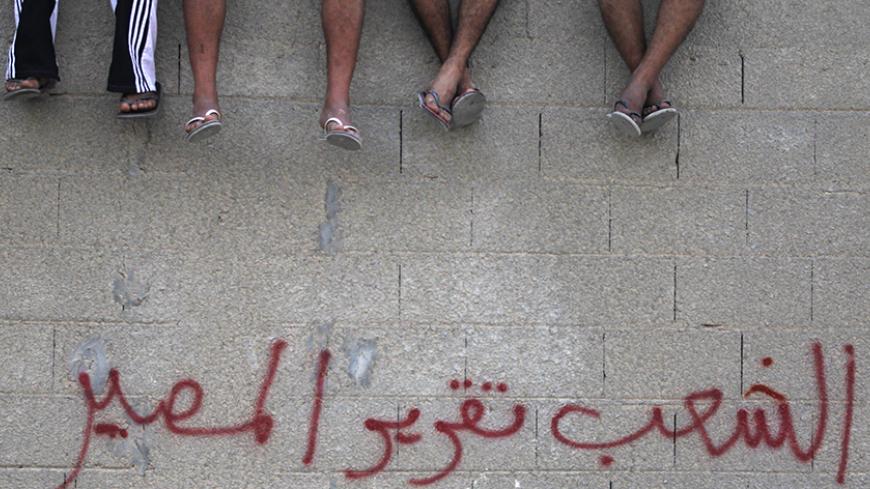 Shiite Bahraini men sit on a wall with graffiti that reads ''People want self-determination" as they attend a rally held by the Al-Wefaq opposition party, in the village of Boori, south of Manama, Oct. 14, 2011, to mark the eight-month anniversary of the February 14 uprising. - REUTERS/Hamad I Mohammed

On the heels of a Bahraini court suspending Al-Wefaq for the Shiite society’s alleged role in creating "an environment for terrorism, extremism and violence,” Bahrain’s rulers delivered a powerful message on June 20 by annulling Ayatollah Sheikh Isa Qassim’s Bahraini citizenship.

Following five years of stalemate, the Bahraini leadership sees no purpose in engaging the Shiite opposition and instead favors eliminating Shiites who call for the government’s dissolution from political life in the island. By excluding popular political groups from Bahrain’s political arena amid a wider crackdown, however, there are risks of militancy gaining broader power and appeal within the Shiite opposition.

Throughout the past five years, Manama has grown increasingly reliant on Gulf Arab and Western allies. The Shiite-led Arab Spring uprising unsettled Gulf Cooperation Council (GCC) leaders fearful of Bahrain aligning with Tehran following a popular Shiite revolution. Saudi Arabia and the United Arab Emirates were quick to deploy ground forces to the island by March 2011 to help Bahrain's rulers quash the uprising.

Manama’s participation in the US-led military campaign against the Islamic State (IS) and the kingdom’s “pricey PR push” on K Street seem to have further consolidated Bahrain’s alliance with Washington, despite some diplomatic spats over the past five years. Despite the Department of Defense’s congressionally mandated contingency plans for relocating the Navy’s 5th Fleet, Washington is unlikely to undergo the massive undertaking of moving the Persian Gulf’s most powerful naval force to another facility. The United Kingdom’s plans for a permanent base in Mina Salman, Bahrain, announced in 2014, underscore Manama’s important role in London’s strategic return “East of Suez” 40 years after the Royal Navy’s official departure from the Gulf.

Unquestionably, allies in Riyadh, Abu Dhabi, Washington and London have prevented the Al Khalifa rulers from being pressured into negotiating a resolution to the kingdom’s crisis.

The ruling family’s ties with the Bahraini Muslim Brotherhood’s political wing, Minbar, and the more conservative Salafi society, Asala, to counterbalance the Shiite opposition has been another pillar of the regime’s strategy for standing strong since 2011.

Formed in 1984, Minbar’s platform reflects Bahrain’s liberal (by GCC standards) social environment, particularly with respect to women’s rights, although the group has close connections with the Muslim Brotherhood’s Kuwaiti branch. Many of Minbar’s members belong to the Hawala tribe, Sunni Arabs who migrated to Persia before returning to the Arabian Peninsula’s eastern shore. The Bahraini Muslim Brothers are middle-class professionals, many of whom are teachers and police officers.

Despite pressure from other GCC states, Manama has not designated Minbar a “terrorist” organization. The Sunni Islamist society not only continues operating publicly, but Bahrain’s Royal Court and Islamic banking sector reportedly fund Minbar. In exchange, Bahrain’s Muslim Brothers have backed the government’s post-2011 crackdown. In February 2013, for example, Minbar boycotted the national dialogue to protest what the island’s Muslim Brothers saw as unacceptable Shiite “silence” on violence plaguing the uprising’s two-year anniversary. At times, Minbar has even criticized the ruling family for responding too softly to Shiite dissent.

Despite Bahrain’s politically active Sunni Islamists supporting the regime during 2011, a growing number have made their own demands since that crisis erupted. In fact, Shiite protesters shared some of these demands such as releasing political prisoners and liberalizing Bahrain politically. Concerned about the possibility of Sunni opposition materializing, the state implemented electoral reforms to redraw boundaries before the 2014 elections. Consequently, Minbar and Asala only retained a combined three seats in the National Assembly’s Council of Representatives — down from five. Additionally, although Al-Wefaq was the main target of legislation passed last month to ban mixing religion with politics, the law also bodes poorly for Minbar and Asala — Bahrain’s second- and third-largest Islamist factions, respectively, after Al-Wefaq.

The influence of extremist ideologies in the kingdom’s Sunni communities is unsettling, particularly in light of numerous Bahraini Sunnis pledging allegiance to IS. As of January 2015, at least a dozen Bahrainis had joined Sunni militant organizations in Syria and Iraq. After King Hamad revoked Omar Bozboun’s Bahraini citizenship for joining IS, he responded by threatening to “enter Bahrain with blazing guns and behead the king.”

Turki al-Binali, a Salafi cleric hailing from a wealthy Sunni family allied with the Al Khalifas, is now IS’ leading preacher. Prior to leaving Bahrain in 2013, he held a rally in front of the US Embassy in Manama with his followers holding pictures of Osama bin Laden while waving al-Qaeda flags. Two and a half years after Binali left the kingdom, a Bahraini court tried him in absentia and nearly two dozen other Bahrainis on charges of seeking to topple the Manama regime and create an IS branch in the island. One family member, Mohamed Isa al-Binali, was an officer in the Interior Ministry overseeing Shiite inmates in Jaw Prison before defecting to IS in 2014.

There are several other reasons why Bahrain appears to be a logical destination for the group’s agenda. These include IS offshoots waging acts of terrorism in neighboring Saudi Arabia and Kuwait, the presence of many Shiite Muslims and non-Muslim expatriates, the 5th Fleet being stationed in Bahrain, Manama’s role in the Washington-led military campaign against the group in Syria and the island’s reputation as the “brothel of the Gulf.”

Another threat to the nation’s stability stems from Manama granting Bahraini citizenship to Jordanian, Pakistani and Yemeni Sunnis to alter the country’s sectarian balance. Opposition voices in Bahrain maintain that these "naturalized Bahrainis" are Sunni “fundamentalists” who harbor anti-Shiite sentiments. As these non-Bahrainis earn their citizenship through service in Bahrain’s security apparatus, IS infiltration into the state’s military and police is a risk.

As underscored by the past several months of violent attacks targeting Bahrain’s security forces with improvised explosive devices and Molotov cocktails, the crackdown is failing to resolve the kingdom’s crisis. If the cancellation of Qassim’s citizenship and the court’s suspension of Al-Wefaq lead to the exacerbation of violence, the government will be forced to address an increasingly dire security crisis on top of managing social risks stemming from austerity measures amid an era of cheap oil — itself a contributing factor to the island’s sectarian issues.

As sectarian temperatures rise in the Gulf with Iranian and Lebanese Hezbollah officials harshly condemning Manama’s annulment of Qassim’s citizenship and Iraqi Shiite forces retaking Fallujah from IS, the regime’s relationship with Minbar will be an important variable to observe as the Saudi-aligned monarchy seeks to maintain Sunni rule in a Shiite-majority island.

Looking ahead, will Minbar remain loyal to the Al Khalifas and continue viewing the crackdown as a safeguard against a Shiite takeover? Or will discontent over the Sunni Islamist society’s declining political influence cost the regime a key domestic ally? Will the regime continue seeing Minbar as a domestic ally against the Shiite opposition or as a gateway to IS?