The Bahraini government is taking a strong stand against the militant Shiite opposition factions that have become more radical in the past few years. 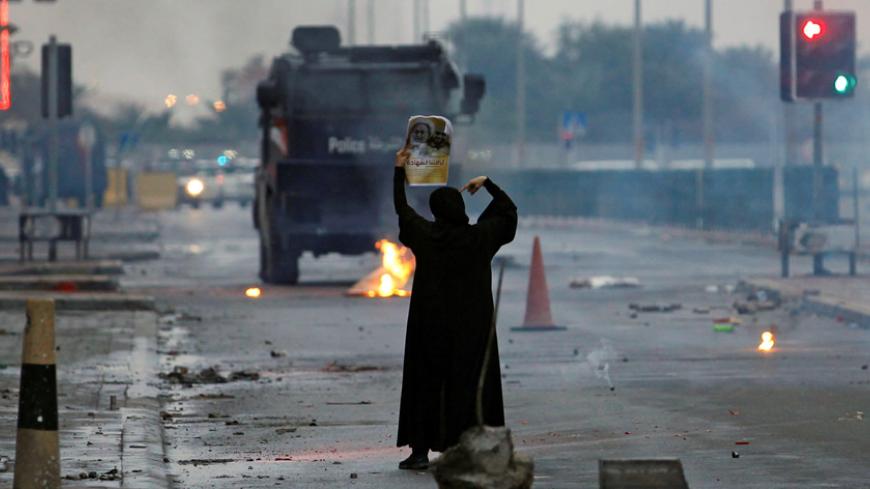 A female protester holds a photo of Shiite scholar Isa Qassim as she confronts a riot police armored personnel carrier during a demonstration to mark the sixth anniversary of the February 14 uprising, in the village of Sitra, south of Manama, Bahrain, Feb. 14, 2017. - REUTERS/Hamad I Mohammed

Bahrain’s Shiite opposition was overwhelmingly nonviolent when unrest erupted in the archipelago sheikhdom six years ago. Amid the recent narrowing of space in Bahrain’s political arena, however, a growing number of marginalized Shiites have radicalized and turned toward militancy. Last year, a wave of Shiite-orchestrated attacks targeted Bahrain’s security apparatus. As of March, there had already been almost as many attacks this year as there were in all of 2016. This development is unsettling given that heightened Shiite militancy severely dims the prospects for peaceful resolution of Bahrain’s ongoing political crisis.

Since 2012, militant Shiites have made their presence felt through violent outbursts, which mainly targeted police officers. In addition, these militants have shown their strength by planting grenades at a mall, detonating an explosive device at the National Bank of Bahrain in Sanad and attacking a power station. These armed Shiite opposition groups include the so-called February 14 Movement, Saraya al-Ashtar (Ashtar Brigade), Saraya al-Muqawama al-Shabiya (Resistance Brigade, or SMS), Saraya al-Mukhtar (Bahraini Islamic Resistance), Quroob al-Basta and Saraya al-Karar. In March 2014, Saraya al-Ashtar and SMS claimed responsibility for the “single worst incident of terrorism on Bahraini soil,” which killed two Bahraini police officers and an Emirati officer in the predominantly Shiite village of Daih. This attack prompted Bahrain’s government to designate those two groups plus the February 14 Movement as terrorist organizations.

Bahrain’s Shiite militant factions are not monolithic. These groups have different narratives, doctrines and political objectives. Some claim to fight in the name of religion, while others do not. SMS fights to “purge” Bahrain of the “Saudi and Khalifa occupiers.” Some of the groups have glorified the March 2014 killing of an Emirati officer (significant within the context of the United Arab Emirates’ support for the Al Khalifas in 2011), and called for an end to the US military’s presence in Bahrain. Other groups have called for violence only against Bahraini authorities, not American or other Gulf Cooperation Countries members’ interests in the sheikhdom.

Saraya al-Mukhtar promotes an agenda beyond Bahrain’s borders, linking the plight of Bahraini Shiites with that of their co-religionists in Saudi Arabia’s Eastern Province on the other side of the 16-mile King Fahd Causeway. Saraya al-Mukhtar sees Saudi and Bahraini Shiites in Eastern Province and the archipelago kingdom as one people with a common enemy. Last year, it called the execution of Shiite Sheikh Nimr al-Nimr “one of the greatest crimes of history.” Previously, the militant group had reacted with violence in response to the Saudi cleric’s detention.

The elephant in the room is Iran and its support for these groups. Earlier on in Bahrain’s political crisis, the government’s claims about Iran’s hand in the country’s unrest met much skepticism from Western analysts, who saw Manama’s claims as lacking credibility. Yet the uncovering of heavily armed terror cells in the island sheikhdom have given greater credence to the Bahraini government’s allegations that the Islamic Republic is sponsoring radical and violent groups within the Arab Gulf country, which has a Shiite majority but a Sunni monarchy.

Last month, The Washington Post reported that the police discovered large quantities of C4 plastic explosives, $20,000 lathes and hydraulic presses in a hidden bomb factory at a villa. Bahraini officials told their American and European counterparts that other raids in recent years have uncovered arms caches that pose an immense threat to Bahrain’s police. Bahraini authorities shared a dossier with The Washington Post that includes reports on weapons arsenals seized since 2013; they documented Iranian markings on arms, ammunition and grenades. Chemical tests demonstrated that the C4 plastic explosives came from Iranian-linked manufacturing lines with some weapons found in “original Iranian military packaging.” Officials in Tehran deny these allegations and skeptics accuse the Bahraini government of likely planting such weaponry to strengthen its support from Western allies amid a wider crackdown on pro-democracy activists.

Regardless of what constitutes reality, the White House is taking the Bahraini government’s claims of Iranian-sponsored terrorism seriously. Whereas Barack Obama’s administration did not designate any armed Bahraini faction/individual as terrorist, the Donald Trump administration has already began doing so. In March, the State Department designated two affiliates of Saraya al-Ashtar as “global terrorists,” pointing to Iran’s “destabilizing and terrorism-related activities” in the Middle East, specifically Tehran’s arming, training and financing of militant Shiites in Bahrain. Suggesting that such individuals pose a threat to the US Navy’s 5th Fleet in Bahrain, the administration underscored how the designations were in keeping with America’s national security interests.

In January, Bahrain’s government sought to take a strong stand against the militant Shiite factions by executing three individuals who were allegedly behind the March 2014 blast. The execution, carried out by a firing squad, was the first of its kind since Bahrain’s political crisis erupted. Last month, King Hamad bin Isa Al Khalifa approved a constitutional amendment that permits Bahraini authorities to try civilians in military trials, which the government maintains is important for enhancing security. Such moves have followed years of arrests of many Bahraini Shiites, including those who embraced militancy and those who rejected it. Yet despite these efforts, Bahrain’s authorities have failed to stem the tide of militancy that has continued since 2012.

Bahrainis are divided on questions about the nature of the Shiite opposition movement and the extent to which Iran supports its most militant and radical elements. Both sides of this country’s political crisis blame the other for Shiite militancy. Critics of the government argue that Shiite terrorism is an outcome of the dissolution of Al-Wefaq, Bahrain’s dominant Shiite opposition faction, and by narrowing political space, authorities in Manama have added momentum to the radical Shiites’ arguments that only armed resistance can lead to a brighter future for marginalized Shiites. In response, those on the government’s side maintain that Al-Wefaq failed to adequately condemn anti-Khalifa terrorism and distance itself from the militants, which blurred the line between the country’s “moderate” and “radical” opposition elements, justifying the Justice Ministry’s order to shut down Al-Wefaq for its alleged connections to terrorists and fostering of sectarian violence.

Regardless of which side is to blame, Shiite militancy in Bahrain has taken innocent lives and led to scores of injuries. Should Bahrain fail to resolve its ongoing political crisis, the grave threat of more Shiites' embracing militancy, while giving Iran an opportunity to take advantage of another sectarian hotspot on Saudi Arabia’s doorstep, is real. Should these armed factions gain more power and influence, we have to seriously consider the risk of Bahrain becoming what Algeria was in the 1990s.