Does Iran have a card to play in Bahrain?

While protests in Bahrain have remained largely peaceful, does Iran have any influence among the various Bahrain opposition groups? 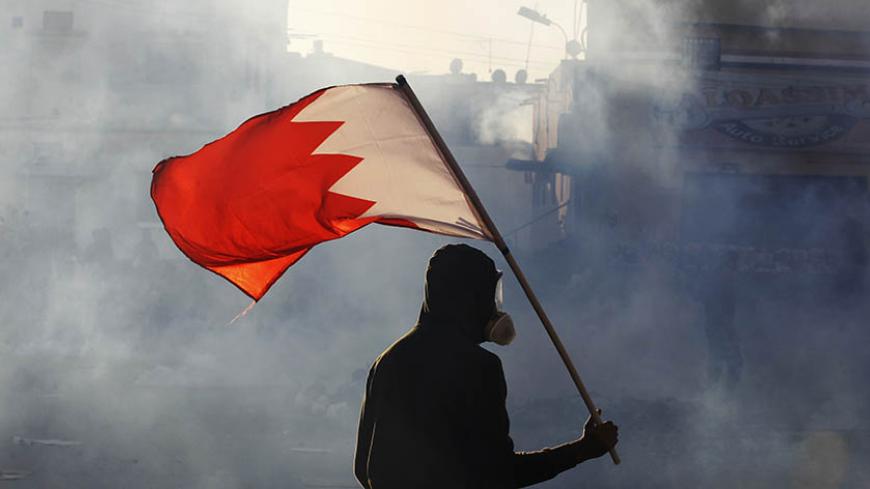 A protester carries a Bahraini flag during a clash with riot police in the village of Bilad Al Qadeem south of Manama, Feb. 6, 2015. - REUTERS/ Hamad I Mohammed

On March 6, on the fourth anniversary of Saudi troops entering Bahrain, the Shiites of Bahrain participated in rallies, led by Al Wefaq National Islamic Society, in the cities of Manama and Sitra. While these protests failed to grab headlines, a new slogan was introduced for the Bahraini Shiite movement: “We are all members of the resistance.” In the political language of the Middle East, resistance means the mostly Shiite front under the leadership of Iran and Hezbollah, the Shiite groups in Iraq, the Houthi movement in Yemen, the Syrian government and Hamas.

Since February 2011, Shiites in Bahrain, in continuation of the Arab Spring, took to the streets and demonstrated, asking for the removal of the prime minister, change in the establishment and constitutional reform.

A small Island in the Persian Gulf and home to the United States Fifth Naval Fleet, Bahrain — which has a Shiite majority — is run by a Sunni ruling class. The protesters have not taken up arms against the establishment and have so far only participated in peaceful demonstrations in the presence of numerous military and security forces in the streets. Still, two years ago, a group called Saraya al-Mukhtar declared its existence. The name of this group means Partisans of Mukhtar al-Thaqafi, who was a prominent early Shiite Islamic figure who sought vengeance for the killing of Imam Hussein. The logo of this group has been very delicately designed to appear unique while including all the visual elements of the official logo of Iran's Islamic Revolutionary Guard Corps (Sepah) — such as the AK-47, the clenched fist and a verse from the Quran.

Saraya al-Mukhtar has so far not engaged in any significant military operation. However, it has repeatedly taken part in smaller operations such as attacking police forces and bombings. On its Facebook and Twitter pages, it constantly publishes political and military statements and is, in a way, the source of recent partisan movements of Bahrain.

Inability to do so is not the reason why this group has not expanded its military operations. Rather it is the will of the political leaders of this movement to keep the movement relatively peaceful. In a speech last year, Hassan Nasrallah, the secretary-general of Hezbollah, said: “The people of Bahrain continue to insist on the peaceful nature of their movement. They have outmaneuvered the government of Bahrain with this tactic. … The opposition leaders headed by Sheikh Isa Qassim and Al Wefaq Society, as well as the secretary-general of Al Wefaq Society, Sheikh Ali Salman, are in agreement regarding the peaceful nature of this movement.”

Nasrallah talked about the possibility of the conflicts expanding in Bahrain, and as a result the people’s movement in Bahrain becoming militant, and said:

“Everywhere, except in Bahrain, movements descended into violence. This is not because the people of Bahrain are incapable of using weapons or that weapons cannot be delivered to Bahrain. Bahrain is like any other country in the world and it is possible to send weapons and fighters even to the most tightly controlled countries in the world."

With these words, the secretary-general of Hezbollah clarified a few important issues. First, depending on the decisions made by the political leaders, the people’s movement in Bahrain might become militant. He also said that certain groups inside Bahrain have received military training and that Hezbollah has the ability, and the experience, of delivering weapons to foreign countries, including Bahrain. Despite speculation, the Houthi movement of Yemen has not taken sides regarding the conflict in Bahrain; when it comes to Shiite resistance movements, Hezbollah is the leading adviser. Also, Hezbollah showed it supports the people of Bahrain in their peaceful movement but that if the circumstances change, it will support a militant movement in Bahrain as well.

The Islamic Republic of Iran, which is the pivot of the Shiite world, has so far only condemned the government of Bahrain’s crackdown on its citizens. The supreme leader of the Islamic Republic, Ayatollah Ali Khamenei, said three years ago in Tehran: “The rulers of Bahrain claim that we have interfered in their internal affairs. [I tell them] we were involved in the anti-Israel activities and the result of it was the 33-day war. We continue to support any nation, or group, anywhere in the world, that opposes the Zionist regime; we are not afraid of saying this. The ruler of the island of Bahrain says that Iran interferes in their internal affairs; this is a lie. If we had interfered, the conditions would have been different in Bahrain.”

It is clear that both the leader of the Islamic Republic and the secretary-general of Hezbollah are indicating that if they decide to support an indirect military interference in Bahrain, then there will be a regime change in that country.

Saraya al-Mukhtar recently announced that it has utilized its first weapon, Mukhtar1, against the security forces in Bahrain. It also claims that it has in its possession other weapons called “Sharaf1,” “Betar1” and “Sayad1.” However, there is no clear information about facilities and equipment available to this group. Saraya al-Mukhtar has shown that it is capable of making improvised explosive devices, or IEDs. In this respect, if the conflict in Bahrain escalates and if the opposition leaders decide to use violence in their battle against the government of Bahrain, Saraya al-Mukhtar can get its required weaponry from Hezbollah and Ansar Allah of Yemen. During the Syrian war, Hezbollah demonstrated that it has gained a lot of experience in transferring weapons and munitions to key locations.

A careful observation of the events of the region will show us that the Islamic Republic of Iran has planned a careful, long-term strategy to expand its influence in the region. Saudi Arabia, as the pivot of the Gulf nations, is highly concerned about the recent developments in Bahrain and has conducted military activities in that country as well.

Nonetheless, expansion of the crisis in Syria and Iraq has created an opportunity for the Quds Force for more extensive networking in the Middle East. Sepah has created effective paramilitary groups in Syria, Iraq, Lebanon, Yemen and now Bahrain. In Syria and Iraq, the Islamic Republic has an advantage over Saudi Arabia and Yemen has also left the circle of Saudi influence and has gotten closer to Iran. Currently, to the north of Saudi Arabia, the government of Iraq has close ties with Iran and to the south of Saudi Arabia the Houthi movement of Yemen has occupied Sanaa. As the result, Iran now has the opportunity to complete its siege of Saudi Arabia. I believe that the elimination of the Sunni extremist groups in Syria and Iraq has created the opportune moment for the movement leaders in Bahrain to change their minds about the use of weaponry and the start of a militarized movement. This possible scenario will seriously threaten the interests of the United States and Saudi Arabia in the region.