The White House has once again postponed a Gulf Cooperation Council summit aimed at bringing together the fragmented alliance to counter Iran. 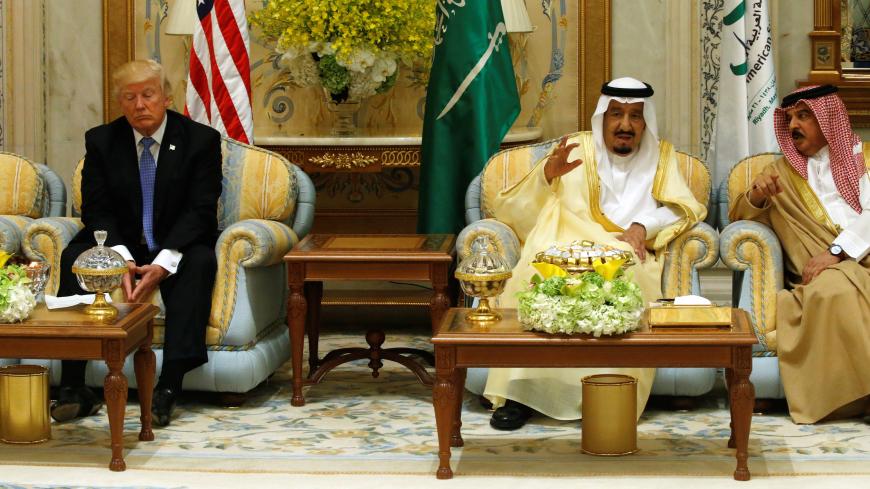 The Donald Trump administration has delayed an October summit to band together Gulf countries against Iran until next year, current and former US officials tell Al-Monitor, a potential blow to efforts to reconcile the six-nation bloc.

Officials say President Trump’s packed travel schedule before November’s midterm elections has forced the administration to postpone the summit, marking the second time this year the United States has nixed a meeting to reunite the Gulf Cooperation Council (GCC).

Leaders of the Gulf bloc haven't met since Saudi Arabia, the United Arab Emirates and Bahrain began a blockade of Qatar in June 2017 over the tiny emirate’s ties to Iran and Islamist groups. The bloc also includes Kuwait and Oman.

A US-led effort to reconcile the Gulf countries failed after the UAE objected to visiting the White House before the emir of Qatar’s visit in April, which would have denied them the opportunity to have the last word with Trump. Despite the administration’s support for a gathering that would reportedly also include Egypt and Jordan, experts say getting the fragmented Gulf alliance on the same page will likely prove difficult.

“The idea of the GCC-plus-two summit is enthusiastically supported by parts of the administration. The Pentagon may be the biggest part. State is on board,” said Bruce Riedel, a former senior CIA officer who now directs the Brookings Institution’s intelligence program. “Part of this may be a plan to stop the Qatar boycott. But it strikes me as a very difficult thing to pull off.”

The meeting, now tentatively set for January, will focus on building a so-called Middle East Strategic Alliance of eight countries to handle Iran’s growing assertiveness in the region through proxy militias. The idea isn’t new: The Barack Obama administration held two summits with the GCC in 2015 and 2016, hoping to strengthen the bloc’s resolve to fight terror groups such as the Islamic State and assuage regional concerns over the Iran nuclear deal.

The US decision to defer the meeting is the latest setback to efforts to revive the GCC, which has taken a back seat to the Trump administration’s push to isolate Iran since withdrawing from the 2015 nuclear deal in May. Despite the summit chatter, it’s not clear that Gulf reconciliation remains a top foreign policy priority for the Trump team.

Secretary of State Mike Pompeo has racked up more than 100,000 miles since taking office in April, but has yet to visit Qatar. His predecessor Rex Tillerson by contrast enjoyed a strong relationship with Doha from his days as CEO of ExxonMobil, visiting the country in the midst of the crisis in October. The White House did not return Al-Monitor’s request for comment in time for publication.

“There’s really not much more momentum on doing much,” a source close to the Trump administration told Al-Monitor. “I don’t get a sense that Jared [Kushner]’s too keen on resolving the Gulf crisis.”

On Capitol Hill, lawmakers have also struggled to push the Gulf talks forward. Qatar’s lobbyists have pushed legislators to help reunite Gulf families divided by the blockade, but a House provision championing unity in the six-country bloc inserted into the annual US defense authorization bill died in conference last month.

US-Gulf relations could face more political headwinds if Democrats capture either chamber this November. Senate Foreign Relations Committee ranking member Bob Menendez, D-N.J., is already holding up arms sales to the Gulf over concerns about civilian casualties caused by the Saudi and UAE intervention in Yemen.

Meanwhile, Saudi Arabia and its Arab allies have stuck by a list of 13 demands on Qatar to end the crisis, including shuttering state-owned television broadcaster Al Jazeera and cutting ties with Iran. All sides appear to be settling in for a long fight, with a source close to Qatar telling Al-Monitor that Doha has few expectations of getting the crisis settled quickly.