Instead of distancing himself from decisions that will cause a backlash at Israel, Prime Minister Benjamin Netanyahu hailed US President Donald Trump’s decisions to cut UNRWA funds and close the PLO office in Washington. 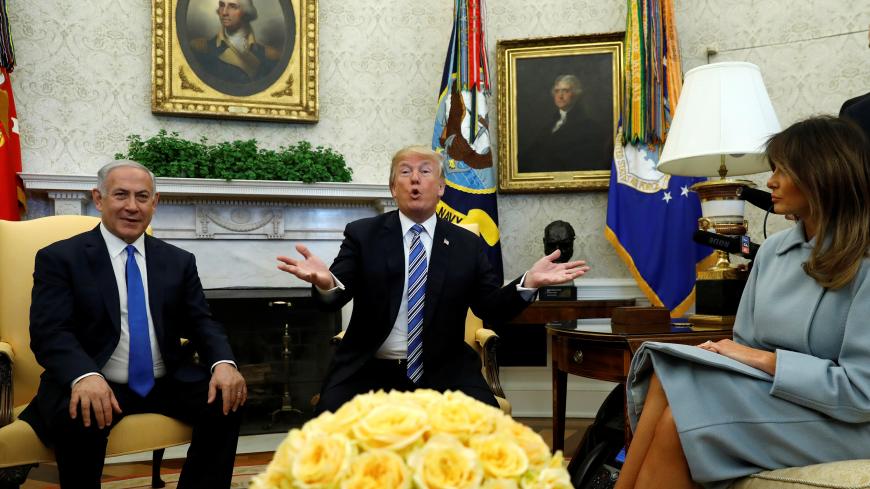 On Aug. 30, 1993, two weeks prior to the signing of the Declaration of Principles on Interim Self-Government Arrangements, better known as the Oslo I Accord, an angry Benjamin Netanyahu, then head of the opposition, took to the Knesset podium. "We will use all legitimate means at the disposal of a democratic opposition to stop this foolish process, which endangers the very future of the country," he declared.

Nowadays — on the agreement’s 25th anniversary — Prime Minister Benjamin Netanyahu can declare victory, although any more such victories will truly spell an end to the State of Israel.

Twenty-five years have passed since US President Bill Clinton helped deliver the “foolish process,” as Netanyahu dubbed it, to the sound of wailing religious zealots and nationalists from both sides. Now, President Donald Trump is digging its grave to the cheering of the rejectionist camps in the Israeli settlement movement in the West Bank and the Hamas movement in Gaza.

Every few days, the White House comes out with new sanctions that Trump has decided to impose on the Palestinian leadership and the Palestinian Authority (PA). One by one, the two gravediggers of peace (Netanyahu and Trump) are systematically dismantling the pillars of the two-state paradigm founded in Oslo.

Let us start at the end. Israel and the Palestine Liberation Organization (PLO) signed the Declaration of Principles at the White House on Sept. 13, 1993. The US and Israeli recognition of the PLO as the sole official representative of the Palestinian people was the main incentive for PLO leader Yasser Arafat to exchange violence for diplomacy. The recent US order shutting down the PLO offices in Washington and the immediate expulsion of Palestinian diplomats and their families on Sept. 16 once again undermines the legitimacy of the PLO as a partner for peace with Israel. The move plays into the hands of the hard-liners, led by Hamas, who agree with Netanyahu that the Oslo Accords are a “foolish process.”

The preamble to Oslo I states that the sides “agree that it is time to put an end to decades of confrontation and … strive to live in peaceful coexistence and mutual dignity and security and achieve a just, lasting and comprehensive peace settlement and historic reconciliation. …”

On Sept. 14, the Trump administration decided to zero out the symbolic aid budget for organizations dedicated to Israeli-Arab coexistence in Israel and the occupied territories through joint sports events and trips for terminally ill Israeli and Arab children. Special US envoy Jason Greenblatt blamed the aid cut on the PA’s refusal to cooperate with the American Middle East peace team. Most of the organizations hit by the aid cut are not linked to the PA. The East Jerusalem hospitals whose funding the Americans slashed by $25 million on Sept. 8 are not under PA control, either.

A week earlier, the United States uprooted the refugee pillar from the foundations of the Israel-PLO agreement. The signatories to the Declaration of Principles committed specifically that “these negotiations [on a final agreement] shall cover remaining issues, including: Jerusalem, refugees, settlements, security arrangements, borders, relations and cooperation with other neighbors, and other issues of common interest.” This did not deter Trump from recently deciding unilaterally on a fundamental change in the position of the peace process sponsor (the United States) regarding the resolution of the refugee problem. In one fell swoop, Trump wiped out the refugee status accorded until now to the descendants of the refugees who were uprooted from their homes when Israel was established in 1948, revoking their rights. At the same time, the administration cut off its $350 million funding of the UN Relief and Works Agency (UNRWA) that helps Palestinian refugees.

As previously mentioned, the agreement that enjoyed the formal blessing of Clinton determined that the future status of Jerusalem would be discussed in negotiations on a permanent agreement between Israel and the Palestinians. Trump, on the other hand, unilaterally recognized Jerusalem as Israel’s capital this past December, moved the US Embassy to the contested city in May and declared that his measures had, in essence, removed the Jerusalem issue from the negotiating table. To top things off, on this breach of the status quo in the city holy to both Muslims and Jews, the administration cut some $200 million from USAID international development projects in the occupied territories.

Is this series of punitive measures helping to achieve the “ultimate deal” between Israelis and Palestinians that Trump promised to engineer when he took office? Have they brought the hoped-for peace any closer? Results of the latest survey conducted by the Palestinian Center for Policy and Survey Research in the West Bank and Gaza Strip indicate just the opposite. Based on a representative sampling of 1,270 adults interviewed face-to-face in the first week of September at 127 locations, most Palestinians oppose renewed dialogue with the United States or a return to negotiations with Israel, and 90% believe the United States is biased in favor of Israel. About one-half of the respondents want the Palestinian leadership to reject Trump’s “ultimate deal,” viewing it as “certainly bad for the Palestinians” — and this is before the plan has even been presented.

Although Netanyahu, with Trump’s help, successfully blocked the “foolish process,” the survey results indicate that the prime minister and his friends on the right have more cause for concern than for celebration. The Oslo Accord also gave birth to the PA and handed it control of part of the West Bank while leaving 60% (designated Area C) under total Israeli control. On the day that the PA shuts its doors, Israel will have to resume the onus of the occupation over the whole West Bank and responsibility for the welfare of all its Palestinian residents.

The poll results illustrate that day is nearing, with some 50% of the Palestinians believing the PA is no longer an asset to the Palestinian people and has become a burden. Over 60% want Palestinian President Mahmoud Abbas to step down. A large majority supports the resolution of the Central Council calling for the suspension of the Palestinian recognition of Israel and ending the coordination between the Israeli and Palestinian security forces.

Nonetheless, the hope for peace has not dissipated. As several Israeli polls indicate, most Israelis still prefer the two-state solution. Most Palestinians also support the establishment of a Palestinian state alongside the State of Israel based on the 1967 borders, with East Jerusalem as its capital. Only 25% favor a one-state solution over a two-state one. It is not too late to stop the march of folly by the leaders of the United States and Israel.