Why is Congress fighting Netanyahu’s battle?

US senators are pressuring the Obama administration to follow policies toward the Palestinians that match those favored by Prime Minister Benjamin Netanyahu. 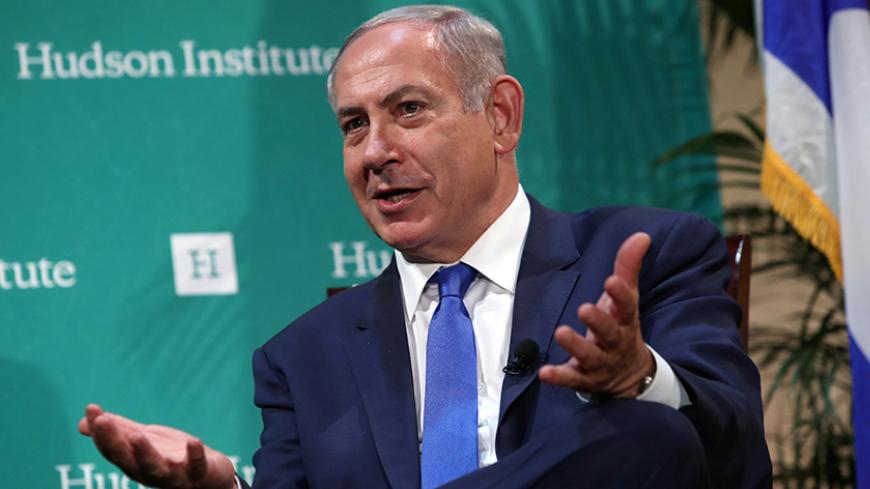 Israeli Prime Minister Benjamin Netanyahu appears to have learned a thing or two from his frenzied attempts to mobilize the US Congress against the nuclear deal with Iran behind US President Barack Obama’s back. Netanyahu is now waging a battle to foil recognition of a Palestinian state by the UN Security Council during the period between the November elections in the United States and the presidential inauguration in January.

The prime minister has chosen to ignore the Sept. 22 prediction US Ambassador to Israel Dan Shapiro made in a Channel 10 interview that the Obama administration is likely to promote an initiative at the United Nations or in another diplomatic forum that could contribute to a peace effort to be continued by the next administration. Netanyahu undoubtedly noticed that the senior US diplomat, who has been privy to discussions on this issue at the highest levels, promised only that Obama would strenuously oppose a unilateral move against Israel and an attempt to delegitimize it. His promise in no way ensures an American veto of a proposed European, Russian, Chinese or Arab resolution calling for recognition of a Palestinian state coexisting in peace and security alongside the State of Israel.

Netanyahu nonetheless kept his cool when asked in a television interview about Shapiro’s scenario of an Obama initiative. “To date, [Obama] has not done so,” Netanyahu said. “I expect and hope that the US will adhere to this consistent policy.” Netanyahu also did not make a big deal out of the Sept. 23 statement by the Middle East Quartet, which described Israel’s West Bank settlements as a grave danger to the two-state solution and an obstacle to peace. Make no mistake, however. Netanyahu has not become a Washington goody two-shoes. He has simply moved from center stage to the wings.

Netanyahu has 88 of the 100 US senators hitched to his wagon. This bipartisan group wrote Obama on Sept. 19 demanding that he veto any unilateral move at the UN Security Council in the coming months on a permanent arrangement concerning the territories that Israel controls or its settlements. That is how things work when you have billionaire friends like gambling tycoon Sheldon Adelson and you have at your disposal a powerful lobbying group like the American Israel Public Affairs Committee. The letter has been posted on the website of the American Israel Public Affairs Committe (AIPAC), and supporters are urged to distribute it far and wide. Among its signatories is the Democratic vice presidential candidate, Sen. Tim Kaine (D-Va).

This letter is far more important than the declaration by Democratic presidential candidate Hillary Clinton that she opposes a unilateral move by the UN and the pledge by the Republican presidential candidate, Donald Trump, to move the US Embassy in Israel from Tel Aviv to Jerusalem. Promises by presidential candidates are written on ice, with the potential to disappear one day to the next. On the other hand, Congress could make life miserable for any president who permits UN recognition of a Palestinian state to pass. US lawmakers cannot force an administration to use its veto power in the Security Council or to withhold it, but Congress does control the federal budget, including foreign aid allocations. Congress could cut or even totally annul aid for the Palestinians that averages $500 million per year, more than European Union and Saudi aid combined.

Such a cut in aid would not be a first. In 2011, Congress froze $200 million in aid to the Palestinian Authority in retaliation for the appeal by President Mahmoud Abbas urging the UN Security Council to recognize Palestine. The elected officials graciously acceded to pleas by Secretary of State Hillary Clinton to avoid cutting aid to the Palestinian security forces as well. She convinced them that such a cut would serve Hamas and hurt Israel.

The letter from the 88 senators could indicate that they are far more scared of AIPAC than they are of the PA's collapse. Support for the PA, like threatening to move the US Embassy to Jerusalem, became a pawn in the hands of Congress during President Bill Clinton's administration shortly after the 1993 signing of the Israeli-Palestinian Oslo Accord under US auspices. In a conversation at the time with Yitzhak Rabin, the prime minister made no secret of his anger at AIPAC's leadership for mobilizing Congress against US economic assistance to the Palestinians.

A comprehensive report by the Congressional Research Service underscores how this aid is part of the US strategy for supporting the PA. The document, made public about six months ago, describes the PA’s dependence on foreign aid as “acute.” A statement issued Sept. 19 following a meeting in New York of PA donor states, the Ad Hoc Liaison Committee, said that the PA's annual deficit is expected to reach $600 million this year. Meanwhile, a 2016 World Bank report concludes that the significant steps being made by the PA to reduce the deficit are not commensurate with the foreign assistance reaching its meager coffers in light of aid cuts, pointing toward budgetary crises. The senators’ letter suggests the mood of AIPAC activists is 88 times more disturbing for lawmakers in Washington than the PA's situation.

On the one hand, a window for carrying out the two-state solution will open for Obama at midnight on Nov. 8, an opening that could be shut by Jan. 20. On the other hand, replacement of the PA by a Palestinian state would enable Israel to ignore its economic agreement (the Paris Protocol) with the PLO and cease collecting and handing over the various taxes it collects for the PA, leading to a temporary halt in tax revenue. The liaison committee would lose its mandate to coordinate development assistance to the Palestinians. Thousands of families of PA employees, among them armed police, would be thrown into poverty, as their salaries depend to a great deal on international donations. Establishing a Palestinian state against Congress' will would lead to the halt of US and international aid. All this in turn would provoke chaos in the Palestinian territories and possibly the establishment of a Hamas regime in the West Bank. Thus, Israel would be forced to again take over the entire West Bank and re-establish a military administration. It would also be forced to fund the education, health and welfare systems for the Palestinian inhabitants.

Support by the president of the United States is a prerequisite for international recognition of a Palestinian state, but this alone will not suffice to turn such a UN resolution into a solution that will bring peace to the Middle East. For that to happen requires waiting for the next president and Congress and hoping that they will get the job done.