Before talks with Palestinians, Israel must fulfill agreements

Years of occupation and settlement expansion render the possibility of reaching an agreement with the Palestinians very slim, but Israel can reach out to them by implementing past agreements. 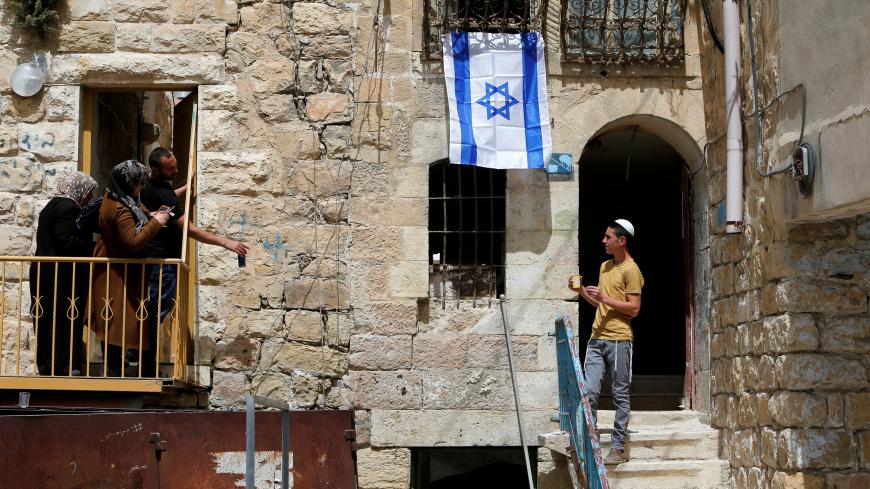 An Israel flag is seen hanging on a house as an Israeli settler looks at Palestinians in Hebron, in the occupied West Bank, March 27, 2018. - REUTERS/Mussa Qawasma

Some say the upcoming elections are mainly a lifeline to save Prime Minister Benjamin Netanyahu from criminal conviction. Others believe that on April 9, Israel’s citizens will choose between perpetuating the rule of a right-wing, clerical government and supplanting it with a centrist, liberal one. President Donald Trump’s much-touted “ultimate deal” between Israelis and Palestinians, which was supposed to prioritize resolution of the Israeli-Arab conflict, will instead merit a footnote in the annals of the 2019 election campaign, at most. Jewish politicians who roll around the word “peace” on their tongue, or mutter the letters o-c-c-u-p-a-t-i-o-n, are considered weird, at best, and dyed-in-the-wool leftists, at worst.

Internal Palestinian struggles are also contributing their share to the growing doubt by Israelis and Palestinians of the two-state blueprint. Calls for a unilateral annexation of the West Bank by the Israeli side and for a one-state solution between the Mediterranean and the Jordan River on the Palestinian side are filling the diplomatic vacuum. The result is identical: death, violence, suffering, theft and despair. But contrary to prevailing public and political discourse, such a fate is not predestined. There is a way out of it.

Indeed, the prospects of the next government, whatever its makeup, vaulting over all the obstacles and reaching the finish line of negotiations with the Palestinians are about as likely as leftist Meretz Party leader Tamar Zandberg replacing Netanyahu in the Prime Minister’s Office — in other words, slim to nil. A decade of rule by the settlers and their political representatives, led by Netanyahu, has deepened Palestinian mistrust of the diplomatic option. That is understandable. The most significant change in half a century of Israeli occupation, affected by the 1993 Oslo Accord and thousands of hours of negotiations in the ensuing quarter of a century, is the addition of over 300,000 Israeli settlers in the West Bank.

And so, the only way to convince the Palestinians and the rest of the world that the two-state solution is a viable option is to change the facts on the ground. Seeing a handful of thugs evacuated from their outlawed hilltop outposts on stolen Palestinian land in the West Bank is far better than listening to numerous news reports of a “breakthrough” in Israeli-Palestinian negotiations.

All the political parties to the left of the Likud theoretically support a diplomatic solution to the Israeli-Palestinian conflict. The platform of the centrist Yesh Atid party warns that the stalemated negotiations and investments in distant, isolated settlements constitute a real threat to Israel’s survival as a Jewish and democratic state. The center-left Zionist Camp (before it was dismantled this month) called for renewed negotiations with the Palestinians on a permanent arrangement based on the principle of separation and two national states for two people. Even the platform of the center-right Kulanu Party, which is a member of the Netanyahu government, supports a territorial compromise (although there is currently no mention of this on the party’s website).

But what will these parties do if and when they win the trust of the Israeli electorate in order to restore the trust of the Palestinian public in Israel’s willingness to pay the price for peace, not only as lip service? Former chief of staff, Lt. Gen. Benny Gantz, currently considered a political threat to Netanyahu’s victory, must address this crucial issue.

As an initial step in proposing change and offering hope, these parties would have to implement an international agreement bearing the signature of none other than Netanyahu. Under the terms of the Oct. 23, 1998, Wye River Memorandum, Netanyahu committed to handing over to the Palestinians 13% of the part of the West Bank under total Israeli control (some 60% of the West Bank, known as Area C). One percent of the territory would be handed over to full control by the Palestinian Authority (PA) (what is known as Area A of the West Bank), and 12% to an area of the West Bank under joint Israeli-Palestinian control (Area B). Israel also committed to transferring 14.2% of Area B to Area A.

However, under pressure from the settlers, Netanyahu got cold feet and stopped the process after handing over only 2% of Area C to Area B, and 7.1% of Area B to Area A. Prime Minister Ehud Barak, who replaced Netanyahu after the 1999 elections, committed in September of that year to an accelerated timetable for implementation of the Wye River deal (the Sharm El Sheikh Memorandum), but he was also unable to withstand the pressure of his right-wing, pro-settler government coalition partners.

Handing over Area C to the Palestinians should begin with the isolated Israeli settlements in the West Bank and the Jordan Valley. A comprehensive survey at the end of 2013 showed that 28.8% of the estimated 100,000 residents of the isolated settlements east of the security fence would like to move away from them in return for monetary compensation. Surveys conducted in 2008 and 2012, also conducted by the Macro Center for Political Economics together with the Blue White Future group, indicated similar results. The 2013 survey shows that the Jewish settlers in the Jordan Valley and the Dead Sea area display the most willingness to evacuate their homes as soon as possible; 43.1% would like to vacate their homes in return for compensation prior to any diplomatic agreement and regardless of such a deal.

Former Israeli Shin Bet agency chief Ami Ayalon, one of the founders of Blue White Future, spoke about that with Al-Monitor this week. He referred to data showing that many Israeli-Jews support territorial concessions (to the Palestinians). For instance, said Ayalon, internal surveys he has that were conducted in late 2015 during the ‘’individual intifada’’ period showed the willingness of some 60% of Israeli Jews to divide Jerusalem and hand over the Palestinian neighborhoods (in east Jerusalem) to Palestinian control. Another internal survey, conducted in the summer of 2018, showed that 50% of people questioned prefer the two-state solution compared with only 4% who support a one-state solution. The rest — more than 40% — are undecided.

Unlike the unilateral 2005 Israeli withdrawal from the Gaza Strip and northern Samaria area of the West Bank, evacuation of West Bank isolated settlements must be coordinated with the PA. Parallel to the implementation of the Wye River and Sharm memoranda, the new Israeli government will have to launch serious negotiations with the Palestinians on resolving all the core issues of the conflict, including future borders, the fate of the settlements and of Jerusalem, Palestinian refugees and security measures. Any attempt to separate these two paths is a sure-fire recipe for the perpetuation of the bloody Israeli-Palestinian conflict and the apartheid regime in the occupied territories. There is no greater moral corruption and no greater threat to democracy. The parties of the left and center must unite against this threat on April 9 and on the morning after.