Kerry's warning to Israel lost in furor over 'apartheid'

Instead of internalizing the warning from US Secretary of State John Kerry about a single-state solution, pro-Israel advocates in the United States and the Israeli right focused instead on his choice of words. 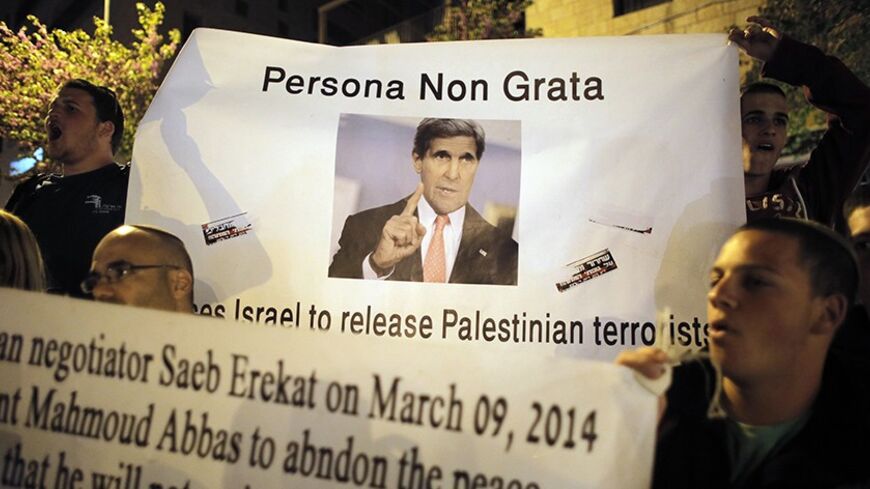 Israelis hold a sign depicting US Secretary of State John Kerry during a protest outside his hotel in Jerusalem against the release by Israel of Palestinian prisoners as a confidence-building gesture, March 31, 2014. - REUTERS/Ammar Awad

It’s too bad that US Secretary of State John Kerry used the explosive term “apartheid” to warn of the severe implications of burying the two-state solution. It is also too bad that professional Jewish politicos, headed by the pro-Israel lobby American Israel Public Affairs Committee (AIPAC), once again managed to turn the Israeli-Palestinian tragedy into a weapon in the struggle between the two rival parties in the United States.

The term “apartheid” does an injustice to pre-1967 Israel, before the war during which the West Bank, East Jerusalem and the Gaza Strip areas were conquered. In those days, Israel did not have racist laws that discriminated against people. There was no political reality in which a despotic minority ruled by force and fascist laws over a majority lacking any political rights or basic civil rights. Then the war came, and its outcome is known.

Instead of dealing with the bad news, Kerry’s critics attack the messenger for the way the tidings were formulated. What would those same “friends of Israel” say if the secretary of state were to make do with the diagnosis that the alternative to the partition of the land into two states is the unification of its populations under the rule of a single state, the State of Israel? Every child realizes that if Israel grants full citizens’ rights to the inhabitants of the West Bank, the Gaza Strip and East Jerusalem, the Jews would become a minority in their own country. On the other hand, if Israel annexes the territories and fails to grant equal rights to the Palestinians, or if it perpetuates the occupation, it will have a hard time taking pride in being a democratic state.

Kerry attempted to ring the same warning bell that many Israelis have been ringing day and night. He didn’t join the Israeli left; he simply repeated the same message that Prime Minister Benjamin Netanyahu delivered five years ago in his 2009 speech at Bar Ilan University. At the time, Netanyahu explained that the two-state solution was the only way to ensure that Israel preserved its Jewish character and democratic nature.

More Palestinians than Jews already live in the strip of land between the Jordan River and the Mediterranean, according to the Israeli and the Palestinian Central Bureaus of Statistics and the CIA. Almost 3 million Palestinians live under Israeli rule in the West Bank and East Jerusalem alone. Since the disengagement from Gaza in 2005, Israel claims that it no longer rules over some 1.6 million residents of the Gaza Strip. But if the unification between Fatah and Hamas actually occurs, Israel could no longer defend itself with this claim.

In a response released by AIPAC to Kerry’s statement, the organization took pride in Israel’s attitude toward the country’s Arab minority. Is that really a source of pride? On this very site we’ve written about how Arab neighborhoods in East Jerusalem, which were annexed to the State of Israel, were disconnected from the municipal water supply. The Supreme Court has protested to the government on several occasions that those same neighborhoods were lacking hundreds of classrooms. Ever since the “unification” of Jerusalem, thousands of dunams were allocated for the construction of Jewish neighborhoods while the inhabitants of East Jerusalem have a difficult time obtaining building permits.

On April 24, I reported about the petition to the Supreme Court to restore planning rights to the approximately 150,000 Palestinians living in Area C who now suffer serious discrimination in matters pertaining to the planning and the allocation of lands.

The Palestinian Authority (PA) is a kind of subcontractor for the Israeli government. It is not sovereign even in the Ramallah area where its offices are located. Israel maintains absolute control over 60% of the West Bank’s territory (Area C). According to the Report on the Illegal Outposts submitted to the government by attorney Talya Sason in 2005, dozens of settlements were built on privately owned Palestinian land. The rest of the settlements were built on what was declared to be “state lands,” based on a law dating back to when the Ottoman Empire ruled the area.

On April 28, the Supreme Court gave the state 90 days to present proposals for institutional means of including the local Palestinian population in the planning processes that impact their lives. The justices expressed their disapproval of the current planning practices in the area and rejected the state’s claims that the Palestinians participate in the existing system. The Supreme Court also ordered the state to respond to the statistics presented by the petitioners, according to which the Palestinian population living in Area C suffers from severe discrimination.

Some 66 years after the establishment of the State of Israel, whose Declaration of Independence promises absolute equality of rights for all the country’s citizens, there is a noticeable gap between Jews and Arabs. There is no need to exhaust one’s self reading the abundant data about the increase in systematic discrimination against Israeli Arabs, as detailed on the website of the Association for Civil Rights in Israel.

It is sufficient to hear the testimony of the leader of the HaBayit HaYehudi Party, Minister of Economy and Trade Naftali Bennett, who is hardly suspected of having leftist sentiments. Last October, he complained that only 2% of Arabs who studied computer programming work for Jewish employers. “It is simply bizarre,” said Bennett at a conference organized by the PA to Develop the Arab Sector, admitting that there was “deep-rooted discrimination against Israeli Arabs in the job market.”

Instead of clashing with Kerry and cheering the achievements of Israeli democracy, Jewish organizations and the Israeli right should have placed the US administration and its predecessors of the past 47 years on a pedestal. The Israeli occupation and the discrimination that accompanies it could never have existed were it not for the United States' overlooking of Israel’s settlement policy and the way Israel has dragged its feet since the Oslo Accord.

On the same topic, the nongovernmental organization Peace Now recently announced that during the last negotiations round, the Netanyahu government advanced the construction of at least 13,851 new housing units across the Green Line, including 2,713 units in isolated settlements east of the separation fence.

Kerry’s initiative to find a permanent solution, which ended on April 29, is a candidate for membership in the disappointing club that includes the Camp David Summit (2000), the Road Map (2003), the Annapolis Process (2007) and the Quartet’s Outline (2011).

Presumably, there is still more to come. Another “peace process,” more settlements, more discrimination. The most important thing, though, is: Don’t use the word "apartheid!"